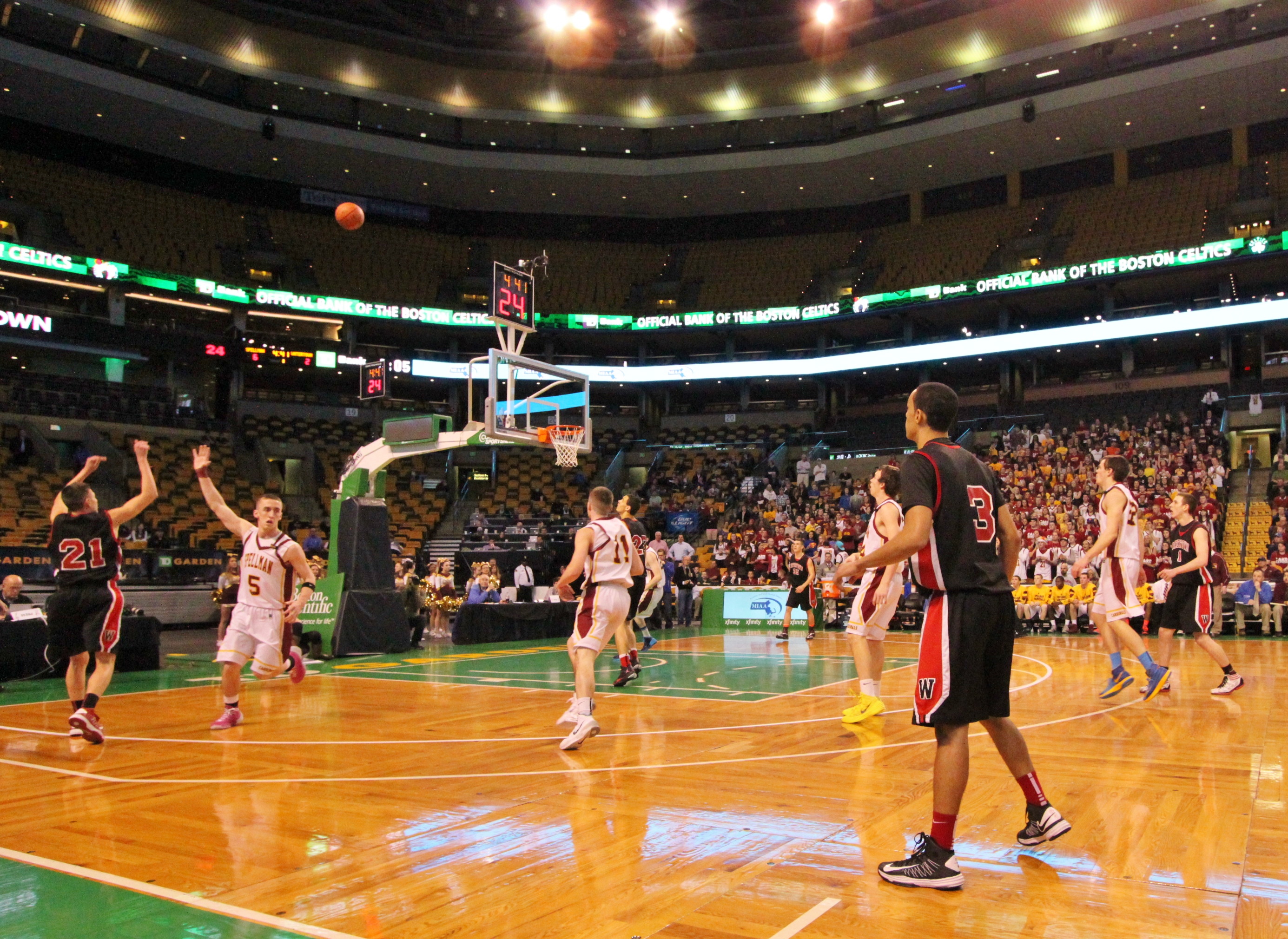 Watertown center Michael Hagopian shoots a three pointer during the State Semifinal at the TD Garden on Tuesday. Watertown fell to Cardinal Spellman in overtime. Photo by Charlie Breitrose.

A battle between two teams linked through history and circumstance needed overtime to decide, and the outcome for Watertown proved to be a tough one to digest.

The Raiders seemed to have Cardinal Spellman on the ropes during the Div. 3 EMass boy’s basketball final at TD Garden on Tuesday. Spellman, however, used the memory of a former player who died playing on the courts of the Watertown Summer Basketball League last summer to inspire an 11 point comeback to tie the state semifinal game and pull away in overtime, 51-44.

Junior center Michael Hagopian opened the scoring in the second quarter with a three pointer of his own. The teams went back and fourth and by halftime Watertown had staked a four point lead, 27-23. Fulcar led the way with four points. 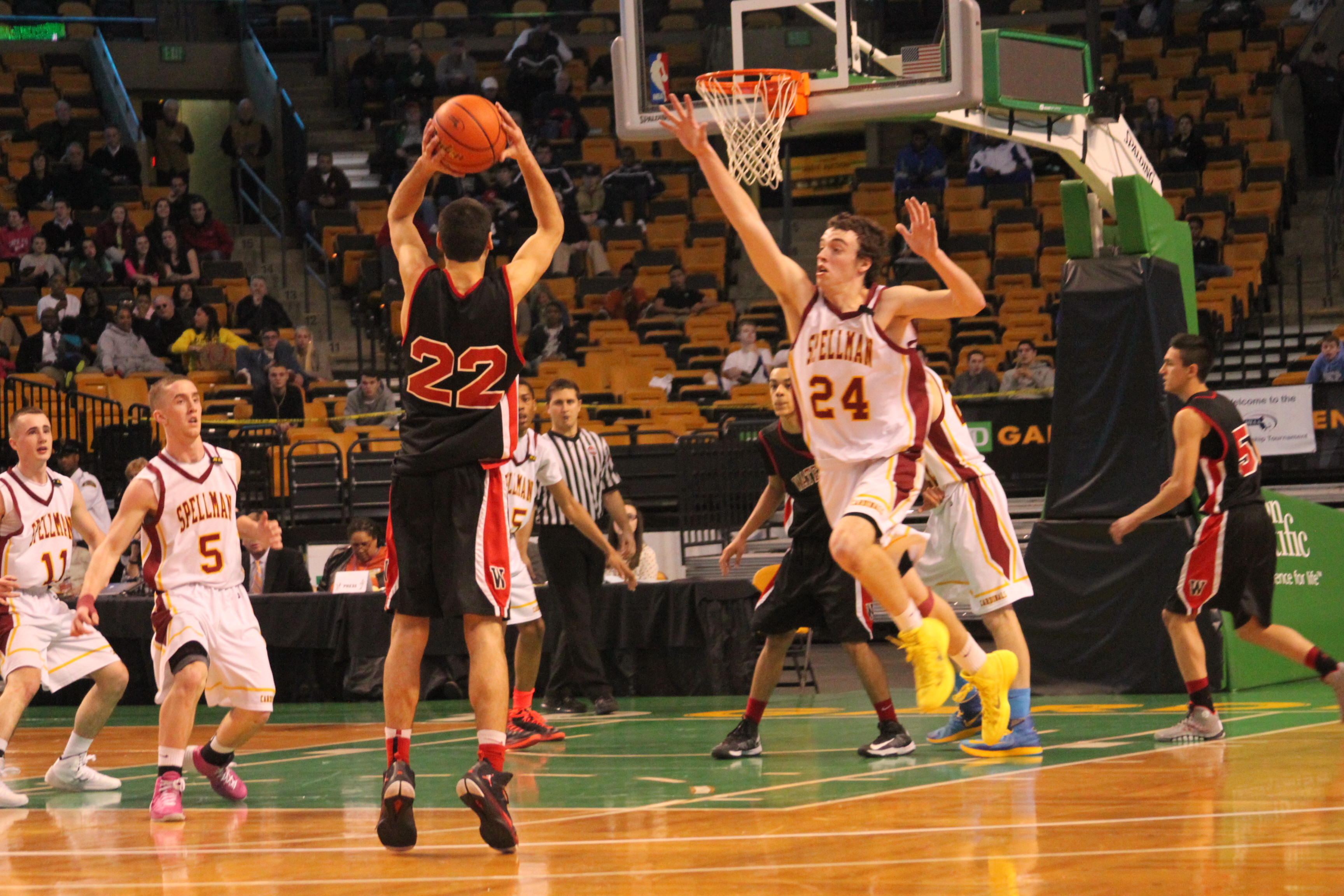 In the second half, Watertown dominated the third quarter – limiting Spellman to four points, and a basket by sophomore guard  Kevin DiPietrantonio early in the fourth quarter staked the Raiders to an 11 point lead.

With their backs against the wall, Spellman’s players stepped up the defense and held Watertown to just four points the rest of the quarter.

“In the fourth quarter, they were a hard team for us to score on. I thought that was the key,” Harrington said. “We thought we had it. We just tried to hang on. A basket or two would have helped us.”

With 22 seconds left, Watertown held a narrow 42-40 lead. Spellman found senior center Joseph Crane who scored two of his 16 points to tie the game. Watertown’s last second shot would not go in.

In overtime, the teams struggled to score for the first of the four minutes, but then Spellman scored nine straight. The final was 51-44. Watertown senior guard TJ Hairston scored the lone points of overtime for the Raiders. He led the team with a game high 17 points and 19 rebounds (including 10 offensive). 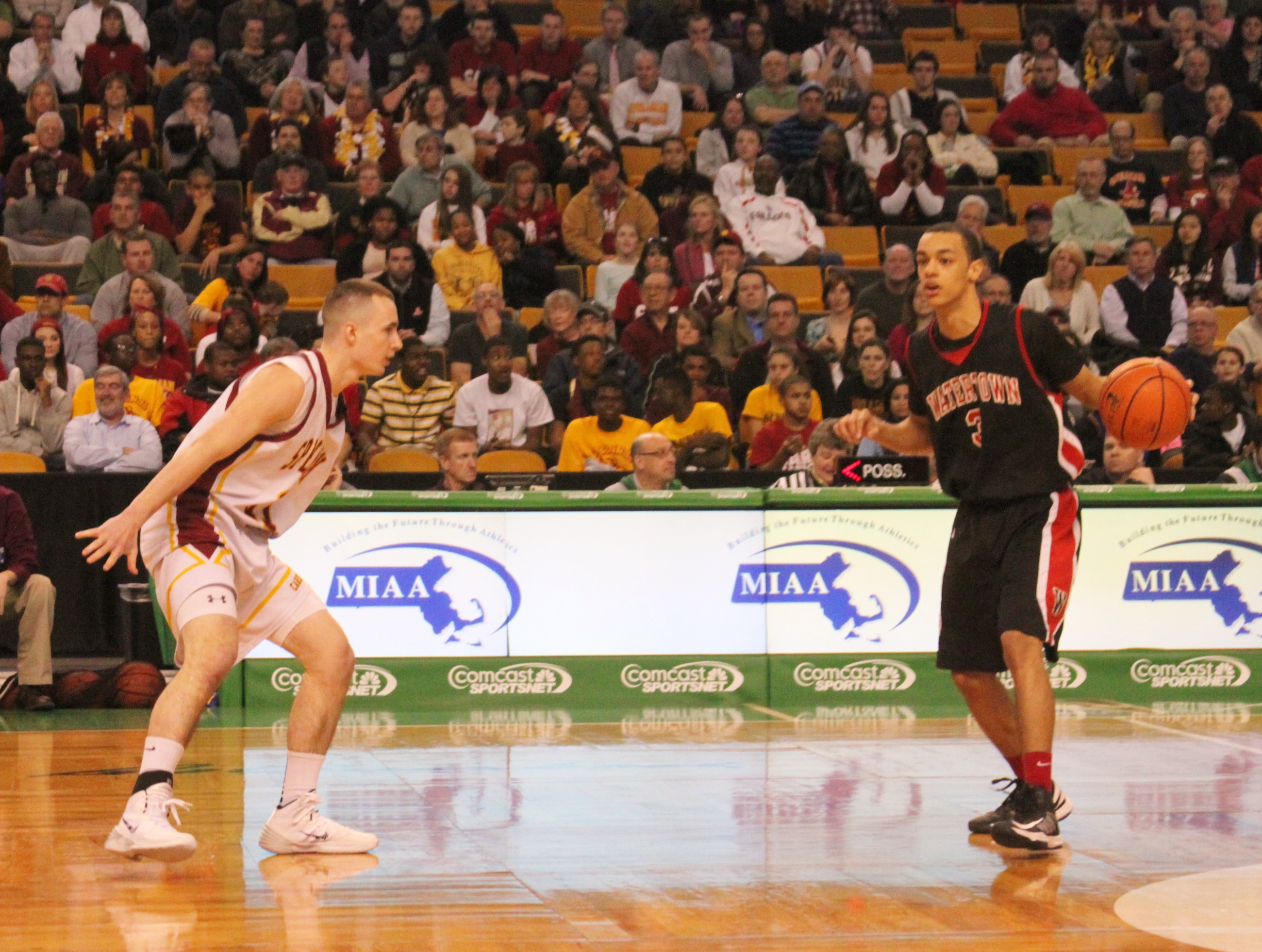 Spellman’s players dedicated this season to former Cardinal Spellman star Joey Glynn, who collapsed while playing a summer league game on the courts behind the Watertown Boy’s and Girl’s Club in June 2013. Their fans chanted Joey’s name and the players said they won the game for Glynn.

The last time that Watertown made the state semifinal, the Raiders took on Glynn’s Cardinal Spellman team. Watertown, led by Marco Coppola, won the game 56-36.

While disappointed by the result, Watertown’s Hairston said he was proud of the season the team had.

“It may not be the result we wanted, but every guy was in it for (the whole game),” Hairston said. “We had a fantastic season.”

Fulcar said he and the fellow seniors were able to restore the Watertown program.

“Our sophomore year we won six games and lost in the first round of the tournament,” Fulcar said. “I was not sure where we would go from there. We were not living up to the Watertown standard.”

While the team won the school’s sixth North Section final, Fulcar said Tuesday’s loss was a tough one.