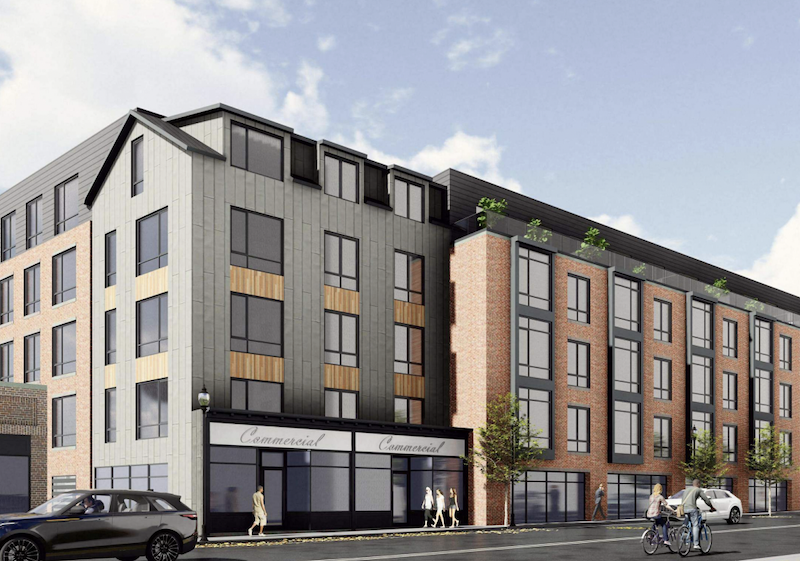 Icon ArchitectureA view of the proposed project at 104-126 Main St. from Main Street. The developers of the project proposed on Main Street in Watertown want to create a place where residents can live steps away from restaurants, stores, and public transportation available in Watertown Square. John O’Connor, senior vice president for acquisitions and development for O’Connor Capital Partners recently spoke with Watertown News about the proposal for the 104-126 Main St. The development would have 146 residential units in four stories above 5,450 sq. 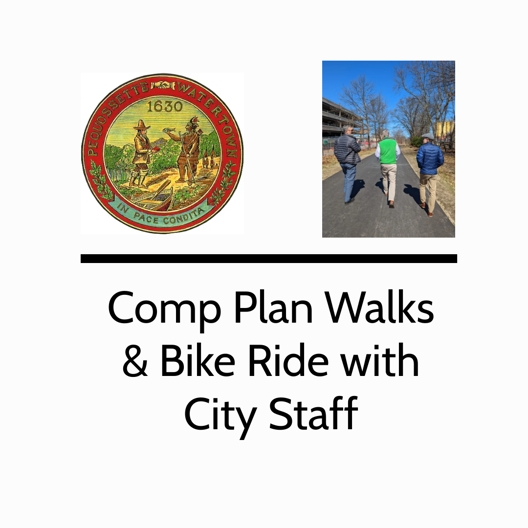 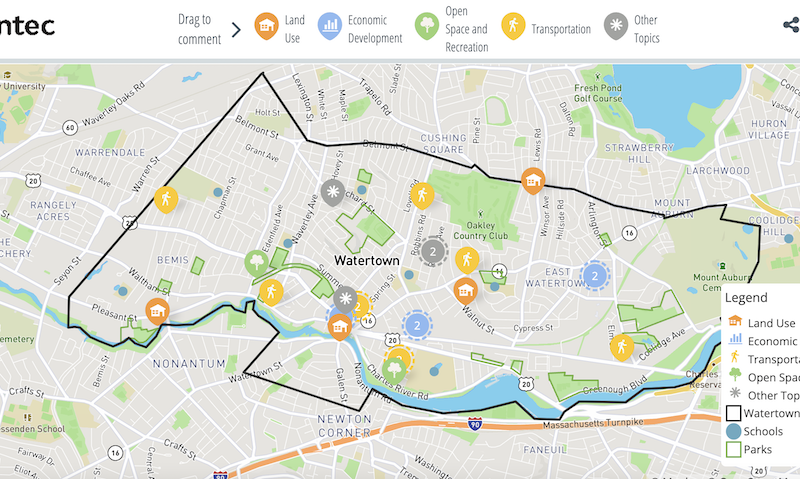 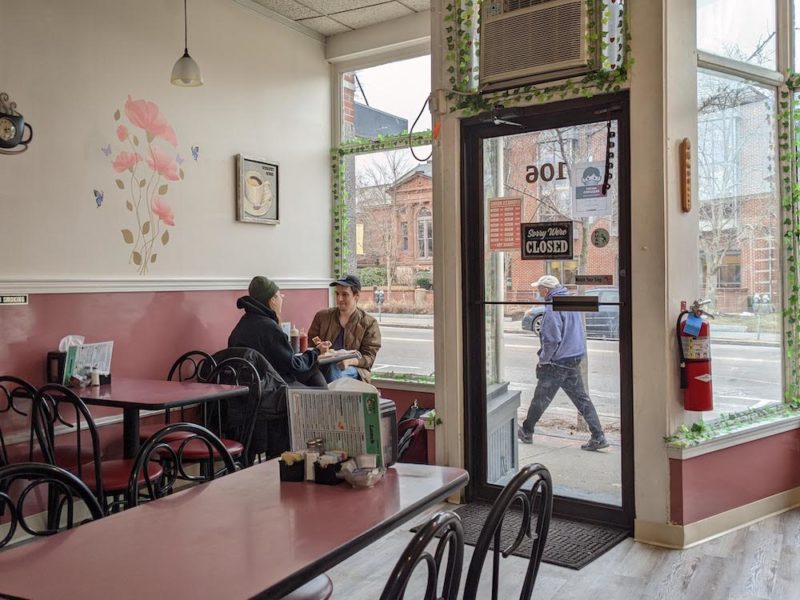 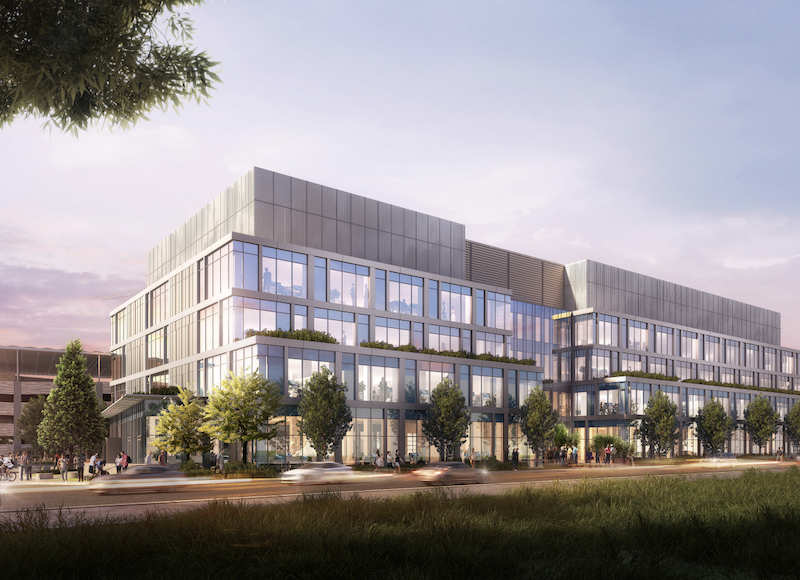 See What Developers May Do on the Former Russo's Site

Icon ArchitectureA view of the proposed project at 104-126 Main St. from Main Street. A five-story mixed use project with housing units on top of retail and commercial space may be coming to Main Street. The development would include properties that currently include the Post Office, a restaurant, a boutique and other properties. The pre-application plans were sent to the to the Watertown Planning Department for review on March 31 show 146 residential units in four stories.

Developer to Discuss Plans for Watertown Mall at Community Meeting

Linda ScottStumps remaining after several trees were taken down at a property on Olcott Street. An Open Letter to the Watertown Planning and Zoning Boards:

There’s a war on trees on Olcott Street. On a one block street where the only major street tree is dying, it was a terrible shock to me and my neighbors when we returned home from our work and chores to find that a developer who bought 45-47 Olcott St., had, in one day, chopped down at least five trees on this private lot … five mature trees that were homes and roosts for wildlife; provided shade on those extremely hot days that have become so prevalent; provided privacy, a commodity hard to come by in this dense neighborhood; and served as a sound buffer for traffic and neighborhood noises. The trees that remained were “pruned” to within inches of their lives. Trees which, in short, made Olcott Street a much more pleasant and livable place were felled without any thought for how this would Impact this neighborhood.

Boylston PropertiesA rendering of what the nine-story 100 Forge building at Arsenal Yards will look like. Developers are creating 165,000 sq. ft. of space for biotech companies. The following announcement was provided by Boylston Properties:

Boylston Properties, a Boston-based developer of mixed-use destinations, today announced that 100 Forge, its 165,595 s.f. life sciences building in the heart of Arsenal Yards in Watertown, is fully leased.

Charlie BreitroseLt. Gov. Karyn Polito spoke with Town Council President Mark Sideris during an event where she announced more than $3 million in grants to Watertown. The event was at the Hampton Inn & Suites at Arsenal Yards. Lt. Gov. Karyn Polito stopped by Watertown on Tuesday to celebrate the transformation of Arsenal Street and to give out more than $3 million in grants to help municipal officials continue the economic growth in the community. The event took place at the Hampton Inn & Suites, located in the biggest redevelopment project in Watertown — Arsenal Yards. Polito recalled how she used to visit the Arsenal Mall when she was a student at Boston College in the mid-1980s, when it looked very different.

LETTER: Resident Would Like to See Russo’s Redevelopment to Bring Life to that Part of Pleasant Street

Watertown will miss Russo’s. Tony has been a friend to many of us (and our dogs) and has worked to implement Watertown Local First, the single use plastic bag ban (in the days before the pandemic), and supported green issues in town. He also has taken it upon himself to organize cleanups of the public space beside his property to the river. We are sorry to see him sell, but I am most concerned about the land use between Russo’s and the river. Watertown has an important role to play in saving our long riverfront for access by the public.

Life Science Building in East Watertown Approved by Zoning Board

Elm Street PartnersA rendering of the new life science lab building approved to be built at 23 Elm St. The building to the right is the Residence Inn by Marriott hotel. Months after it first appeared before the Zoning Board of Appeal, a three story life science lab building at 23 Elm Street got approval to be constructed on Wednesday night. The proposal first came before the ZBA in February, at a meeting where board members expressed their concerns about the amount of parking for the then 78,000 sq. ft.

Hearing About Future of Arsenal on the Charles, Plan for Trees on Campus Continues Monday