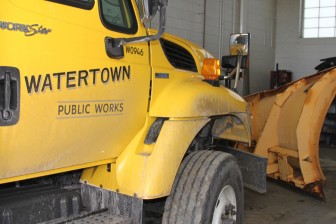 Watertown’s Public Works Department may not get the same heralding as the Police and Fire departments for the work during the search for the Boston Marathon bombing suspects, but the workers will get a big accolade this summer.

The American Public Works Association announced it will present Watertown with the Exceptional Performance Award in Adversity at the annual conference in Toronto this August.

On April 19, 2013, after Watertown Police faced off with the Boston Marathon Bombing suspects the Public Works Department closed off many streets in town and provided lights, among other things, to help law enforcement and the search for the second suspect.

“I appreciate their efforts and it is well deserved,” Town Council President Mark Sideris said at the meeting. “I don’t think we tell them that enough.”

The award is presented to the Public Works Department for the Boston Marathon Bombing Response, according to the email message sent to Mee by the AWPA.

Mee will speak at the associations conference in Toronto this August.