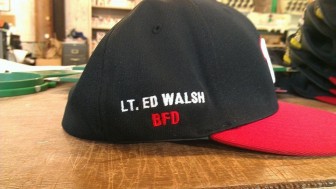 Players of the Watertown High School baseball team wear special hats this season with the words “LT ED WALSH BFD” embroidered on them to honor a former Raider player.

Lt. Edward Walsh, the Boston firefighter killed fighting a blaze in the Back Bay graduated from Watertown High School and he played for the Raiders on the baseball diamond.

Watertown baseball Coach Aram Manoukian is good friends with Ed’s younger brother Mike. After Walsh’s death, the team wanted to do something to honor him.

“The players decided pretty much immediately that they wanted to dedicate the season to him, for being the hero that he clearly was,” Manoukian said. “He was willing to do what 99 percent of men wouldn’t dare to do, which is to put himself into harm’s way to protect others.”

Another friend of the Walshes embroidered the team’s hats with Walsh’s name. The team now chants Walsh’s name before games and a moment of silence is observed before each game, Manoukian said.

The team also went out to line Mt. Auburn Street when Walsh’s body was brought to the funeral home in Watertown.

“I’ve heard stories of kids jumping the fence at the DPW to collect baseballs that he hit over the fence,” Manoukian said. “Both Eddie and Mike played baseball at Watertown. He loved the game. In fact, in 2012 we had a 12-10 record, which was the first time baseball had gone .500 or higher since Ed played here in the late ’80s.”