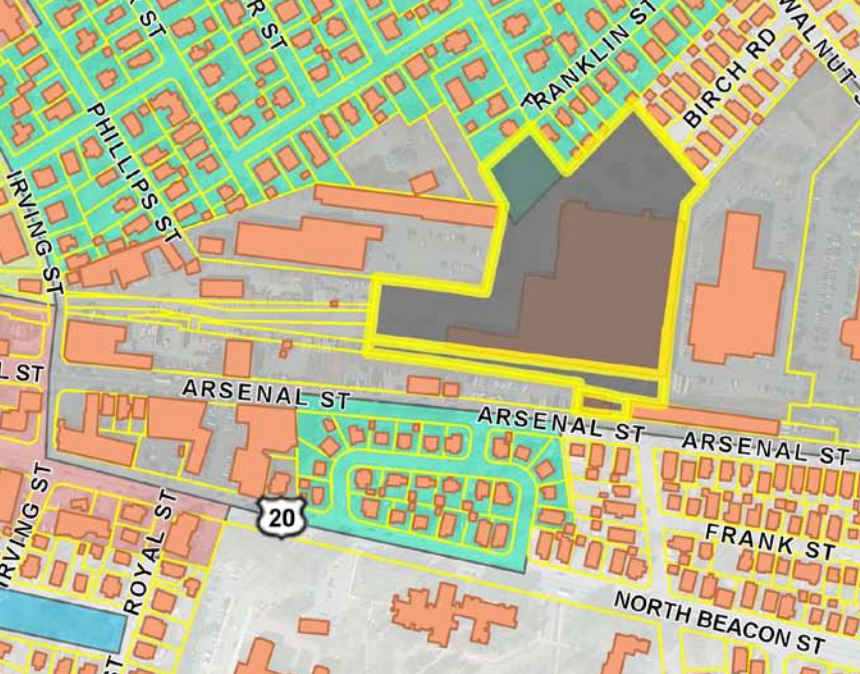 The grey area bordered in yellow on the map shows where the housing project with a market and restaurant will be built.

The grey area bordered in yellow on the map shows where the housing project with a market and restaurant will be built.

The proposed apartment complex, market and restaurant got a grudging approval from the Watertown Planning Board, and now needs a vote from the Zoning Board for full approval.

The project proposed by the Hanover Company and Cresset Development, includes a four-story residential building with nearly 300 apartment units (about 2/3 of which are one-bedroom units), space for a market, a restaurant and other retail along Arsenal Street.

Located at 202-204 Arsenal Street and 58 Irving Street, the project got a 3-1 vote of approval from the Planning Board, with some conditions. Planning Board member Neal Corbett voted against the project.

After the first Planning Board meeting, developers were asked to try to break up the look of the east side of the project to stop it from appearing like one big wall.

Architect Brian O’Connor of Cube3 Studio said that a notch has been made about halfway along the east side to make it appear like two separate buildings. Larger windows and a different color of building materials will be used to make a distinction between the notch area and the main building.

Planning Board members said they think the notch helps, but they had hoped for more.

“I understand about the economics of the project, but offering a notch is minimal,” said Planning Board member Fergal Brennock.

Planning Board member Jeffrey Brown said he would have like to have seen more, such as two such notches or breaking up the wall by creating new lines in the design.

They also tried to make the project more pedestrian friendly by making a service road around the building by making it off limits to traffic except for mail and garbage service once a day and for emergency vehicles.

Corbett said that he wants developers to make the path around the back of the complex, which runs from Arsenal Street, should be inviting to everyone, not just people who live in the complex.

“You need to celebrate those,” Corbett said. “Those are places you can go. They are not forbidden.”

Neighbors and other residents had mixed views of the project. While many said they would like to have the new stores, many others said the project has too many units and does not create a fit in well with the residential neighborhood behind it.

Chester Street resident Dave Sprogis said the project is too dense and has the wrong kind of apartments.

“It should be good for Watertown, and create community and that is not done with one bedroom apartments,” Sprogis said. “Why not construct one and two family buildings.”

Greg Wolff, who lives on a Beacon Park, a street across Arsenal Street from the project said that he thinks developers have done a lot to make life better for residents.

“My wife and I look forward to walking instead of driving to a grocery store and walking to a restaurant and cafe,” Wolff said. “They also agreed to pay to close the entrance from Arsenal Street to Beacon Park.”

The closing of the street must first be approved by the town, and would be done to prevent drivers from using the street as a cut through from Arsenal Street to North Beacon Street.

Chico Sajovic, whose family owns the parcel to the west of the project, said that his property will be boarded on all sides by garages a market. Along with the Hanover project, another garage is proposed to be built in a project that would be built on the land to the east of his which is currently owned by Pirroli and Sons. He tried to work out a deal with the developers but said it did not work out.

“We tried to work out a deal where we would get access to Arsenal Street, but they wanted to let the road be used by trucks making deliveries to the supermarket,” Sajovic said. “And we would be left with property facing two garages and the back of a supermarket. We decided it was not in our best interest.”

There is another parcel in the area north of Arsenal Street and east of Irving Street, making a total of four that could be redeveloped in the near future. Residents asked for the Hanover project to be held up so a master plan could be made for the larger area.

Corbett said he would like to see the projects considered together, instead of doing them one by one. That is not something the town can require, said Community Development and Planning Director Steve Magoon.

“If the four property owners decided they wanted to take part in such a process it would not be a problem,” Magoon said. “A master plan would require all the properties be owned by one entity. That is not the case. The properties have property rights.

“I do think it would be a problem to say to the property owner, yes, you have done what is required but you have to wait for us to do another plan.”

Planning Board Chairman John Hawes Jr. said he too would like to see a plan made for the area, but it is not likely.

“It hasn’t happened,” Hawes said. “It is all private ownership. It is like herding cats.”

The project still requires approval from the Zoning Board of Appeals, which will likely hear the proposal at its meeting on Wednesday, June 25 at 7 p.m.

One thought on “Major Arsenal Street Project Gets OK from Planning Board, Moves Onto ZBA”