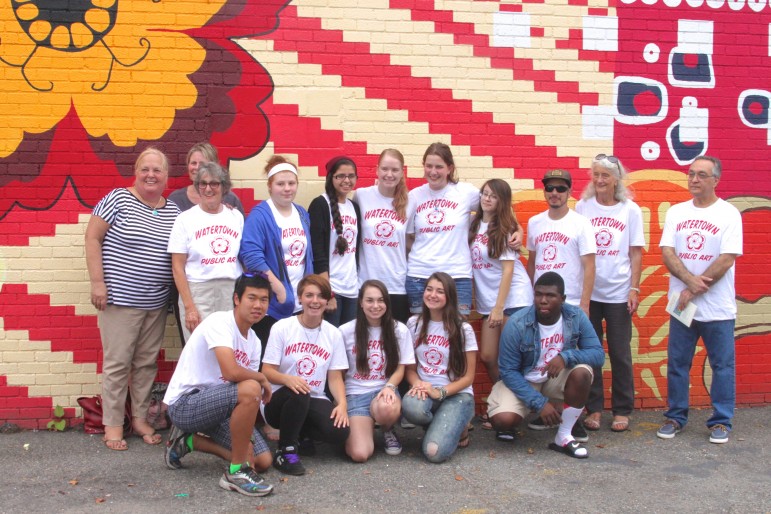 Students who painted the “Tapestry of Cultures” mural in Watertown Square pose with artist Gregg Bernstein (top row, third from right) and members of the Watertown Cultural Council.

What used to be a dingy wall overlooking a small parking lot, now beams with color from a mural painted by Watertown teens over the summer.

On Sunday, Sept. 21, a group came to dedicate “Tapestry of Cultures,” which is on the side of the a building along Baptist Walk.

Alan Dana, whose grandfather and great uncle bought the building in the 1910s, said the mural is a big improvement.

“It was a blank wall and it had some graffiti,” Dana said. “The great thing about a mural is graffiti artists won’t touch a mural. They consider what they do as art and they won’t paint over a mural.”

A panorama photo of the Tapestry of Cultures mural on Baptist Walk in Watertown Square during the dedication on Sept. 21.

The building now houses businesses like The Meat Spot and Watertown Sportswear, but it used to be the location of the first store of a famous chain, Dana said.

“A market that was the first in the Star Market chain was here in this building,” Dana said. “And the Meat Spot has been here since the 1950s, under two owners.”

The mural is the second one that artist Gregg Bernstein has helped create on one of Dana’s buildings. The other is on a wall in Allston.

It is also the second one in Watertown (see more here). The first was on the Community Path between Waverley and Whites avenues. Though the first one featured scenes from Watertown life, modern and historic, and the new one uses images from textiles, they are related, said Watertown High School student Julia Harrington, who worked on both murals. 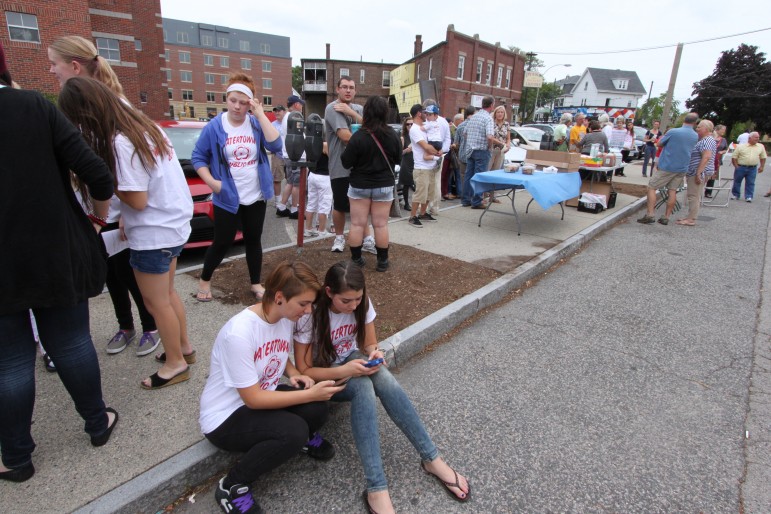 Students, parents and other fans of the mural gather on Baptist Walk for the dedication.

She enjoyed interacting with people walking by while she and other students were creating the mural, no matter what they thought of the project.

“Art is so unique. Everyone can have their own opinion,” Harrington said. “Gregg taught us that it doesn’t matter what people think. As long as you are proud of it, that’s what matters.”

James Vershbow said he is proud of his daughter Abi’s contribution to the town.

“We are all looking to make some sort of impression on our community,” Versbow said. “I look at this and the other mural and I burst with pride with what she’s done. They have created two beautiful monuments, which hopefully will stand the test of time.”

The materials for the mural were donated by Home Depot and Sherwin Williams, said Janet Jameson of the Watertown Cultural Council. The project received funding from the New England Foundation for the Arts, as well as athenahealth, Watertown Savings Bank and the Watertown Community Foundation.

She also thanked the Tufts Health Plan employees who primed the wall as part of a volunteer day.

Food and drinks were provided for the dedication by Russo’s, Danish Pastry House and Dunkin Donuts, Jameson said.