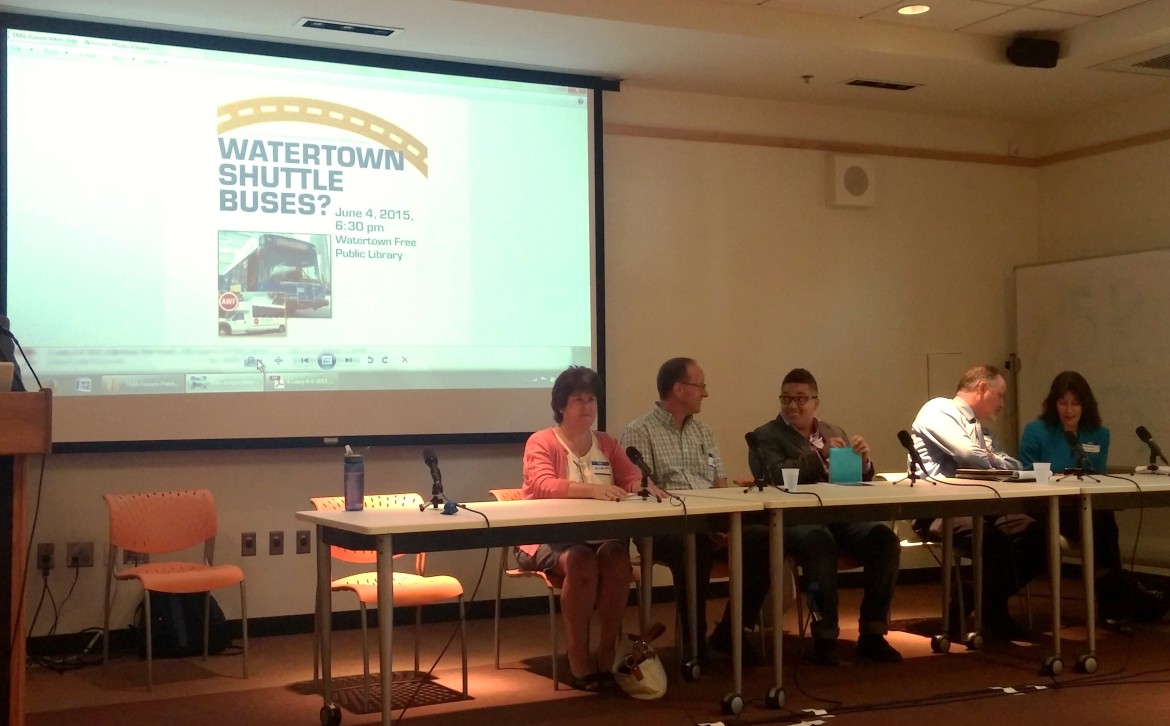 A panel of experts on transportation management associations spoke at the Watertown Free Public Library. 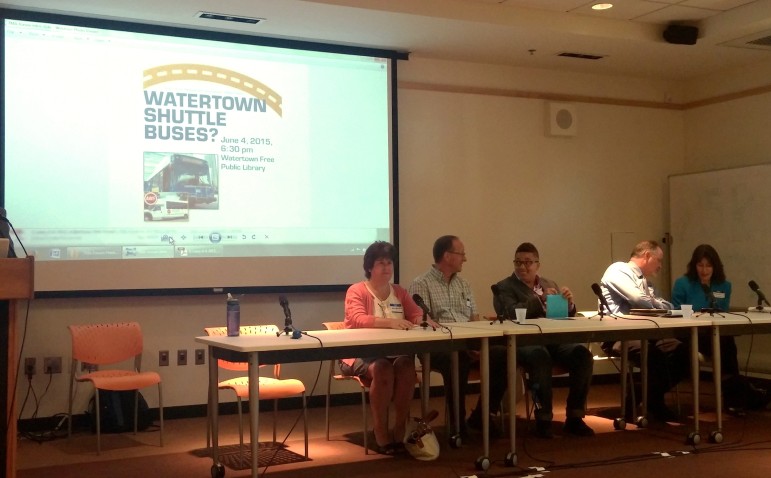 A panel of experts on transportation management associations spoke at the Watertown Free Public Library.

With the MBTA service in Watertown not meeting residents’ and workers’ needs, and a growth boom underway people are looking for ways to improve transportation in town.

One option often brought up is a local transportation management association (TMA), which could run shuttles and provide other transportation assistance. A forum about TMAs  held at the Watertown Free Public Library drew around 100 people. The event an initiative of the Watertown Public Transit Task Force which co-sponsored the event along with the Watertown Belmont Chamber of Commerce.

In recent years large developments have been built on and near Pleasant Street, and more recently along Arsenal Street. To deal with the new homes and businesses, the town has explored creating a TMA to provide transit along these two corridors, said Assistant Town Manager and Director of Community Development and Planning Steve Magoon.

“On the Pleasant Street Corridor, we’ve had discussions with a number of projects and there has been a lot of interest. The only project that we made a requirement to be part of a TMA is Repton Phase 2, known as Watertown Mews,” Magoon said. “On the Arsenal Street Corridor there has been significant interest from projects going in.”

The Elan apartments by Greystar, the Hanover/Cresset apartment complex and the Residence Inn by Marriott Hotel , and the office redevelopment at 480 Arsenal Street have made commitments to participate, Magoon said. Athenahealth, owner of the Arsenal on the Charles, has not committed yet, but has expressed interest.

Massachusetts already has 12 TMAs. They can take many forms, some serving only businesses, others open to residents and workers alike and some do not even have shuttles.

Other services can be coordinating ride shares, van pools, and linking to other transportation options, said Andrea Leary, president and founder of the Northeast Transit Planning & Management Corp and executive director of the Merrimack Valley TMA.

“If you can’t get to the new rail stop in Brighton a TMA could band together and help support that,” Leary said.

The ones that allow the public to ride usually have a cash charge. The Charles River TMA in Kendall Square charges $2, and Lexpress in Lexington charges $2.50.

Any TMA serving businesses should have a guaranteed ride home, said Allison Simmons, who currently runs the A Better City TMA and the Allston Brighton TMA.

Simmons said the reason a lot of people don’t use transportation is the “what ifs,” like what if my child gets sick or I have to work late and miss the last train.

“This gets rid of the what if,” Simmons said.

While TMAs can fill the gaps, they still rely on public transportation, such as the MBTA.

“We would be no where without the T,” said Jim Gascoigne, executive director of the Charles River TMA. “The people at the T work hard, but morale is low. Stop beating on the T and get together to see how you can make transportation more successful.”

Watertown could create its own TMA or join an existing one, such as the one run by the 128 Business Council. Executive Director Monica Tibbits-Nutt said her group not only coordinates shuttles but also gives added services.

“If Hubway is not expanding to your area, we can set up a bike share program,” Tibbits-Nutt said. “We make tourist maps and a map for conservation walks. We set up a map with walks you can do at lunch to get people who work in the community more involved in the community.”

Gascoigne said creating a shuttle is not always an easy sell to businesses. He was brought in to create one in the Kendall Square area and found that the companies already running their own shuttles liked the idea, because it was a less costly option. Those who did not have one saw it as an expensive endeavor.

One of the keys to a successful TMA is to have long-term funding sources.

“It takes a long time for a TMA to mature,” Gascoigne said.

The government used to provide money to help start TMAs, but that is becoming hard to come by.

The Merrimack Valley TMA got money from the Massachusetts Department of Transportation to get started. It was supposed to last five years, but she learned recently that the fund will not be funded this year.

Lexpress receives money from participating companies, from fares and from the town’s tax levy.