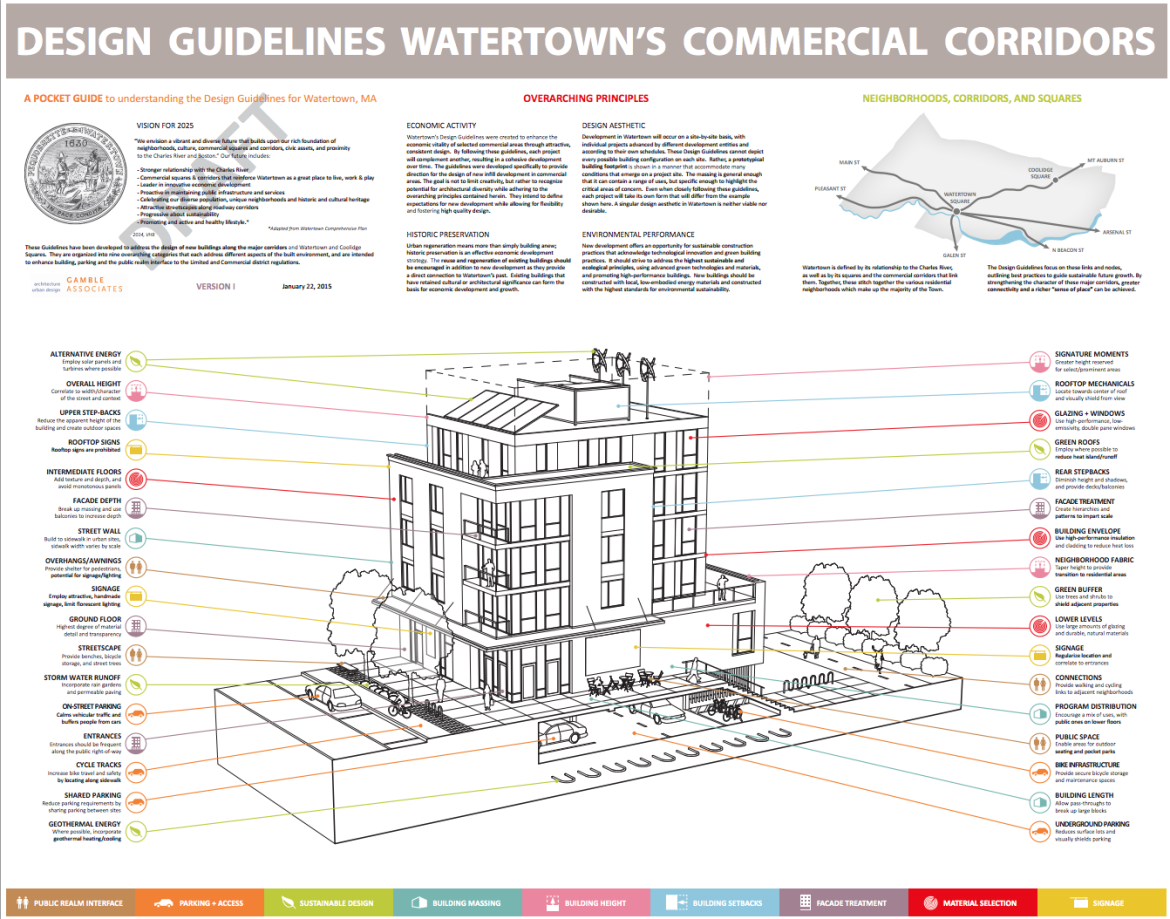 A poster was created to demonstrate Watertown's new design guidelines.

A poster was created to demonstrate Watertown’s new design guidelines.

After more than nine months of work, Watertown’s new Design Standards and Guidelines have been approved, but not without some concerns.

Before Watertown began working on the design guidelines and standards, developers only really knew what they could not build on a piece of land, said Assistant Town Manager and Community Development and Planning Director Steve Magoon.

The standards and guidelines were one of the recommendations of the town’s Comprehensive Plan, passed last week. They were also the result of a push for something to deal with the development boom in town.

“When developers come to town they have a poster and an 80 page document which are the design guidelines themselves,” Gamble said.

The design standards were approved with a 7-1 vote, with the lone “no” vote coming from East End Councilor Angeline Kounelis. She said she could not support some items such as reducing minimum amount of parking and making a minimum height of buildings 24 feet – or two stories – for mixed-use projects.

“A minimum is binding,” Kounelis said. “I cannot support this.”

Other councilors had concerns about the maximum length of buildings being 300 feet, but could be longer if developers get a special permit from the Zoning Board of Appeals. Resident Barbara Ruskin also was concerned, and said she hoped that the projects would not be able to go beyond 300 feet, even with a special permit.

Ruskin said she and other residents worry about how the new standards and guidelines will be enforced by the Planning Board and Zoning Board of Appeals.

“How is the public assured that the voting boards will be respectful to the design guidelines?” Ruskin said. “There is still so much discretion in the hands of the boards.”

Councilor Aaron Dushku asked whether the town should be satisfied with making projects environmentally sustainable by making them LEED certifiable, but not certified. Instead of requiring projects to go through the LEED (Leadership in Energy & Environmental Design) certification process – which can be costly – they must only meet the standards to be certified. Dushku said suggested the projects meet higher levels of LEED, such as Silver or Gold, but still not require certification.

One change made to the design standards and guidelines was to make sure that trees are planted properly. Councilor Susan Falkoff proposed the amendment that would require trees to be given enough room to grow to maturity. This would include space to allow enough water to grow and room for roots to grow to full size. The Council voted unanimously to approve the tree amendment.

The Design Standards and Guidelines have actually been applied to three projects already, including the recently approved Elan apartment and retail complex on Arsenal Street. Chris Regnier, attorney for the developer – Greystar – said he had mixed reactions when he heard the project would be a test case for the new standards.

“I said, ‘I’m concerned. It could go very bad,” Regnier said. “I have been very pleased with how the process went.”

The design standards were written right into the town’s Zoning Ordinance (see a list of the changes by clicking here).

Some of the Major Changes

• How building height is measured, especially on a sloping site, which will be measured using a plane created by the slope of the property.

• The maximum height can be exceeded in four cases:

• The maximum length of a building is 150 feet, unless developers get a special permit, which could make the building 250 feet long. They can be up to 300 feet of an offset 25 feet deep and 50 feet long are incorporated, and can go beyond 300 feet with a special permit

• A minimum height of 24 feet was added.