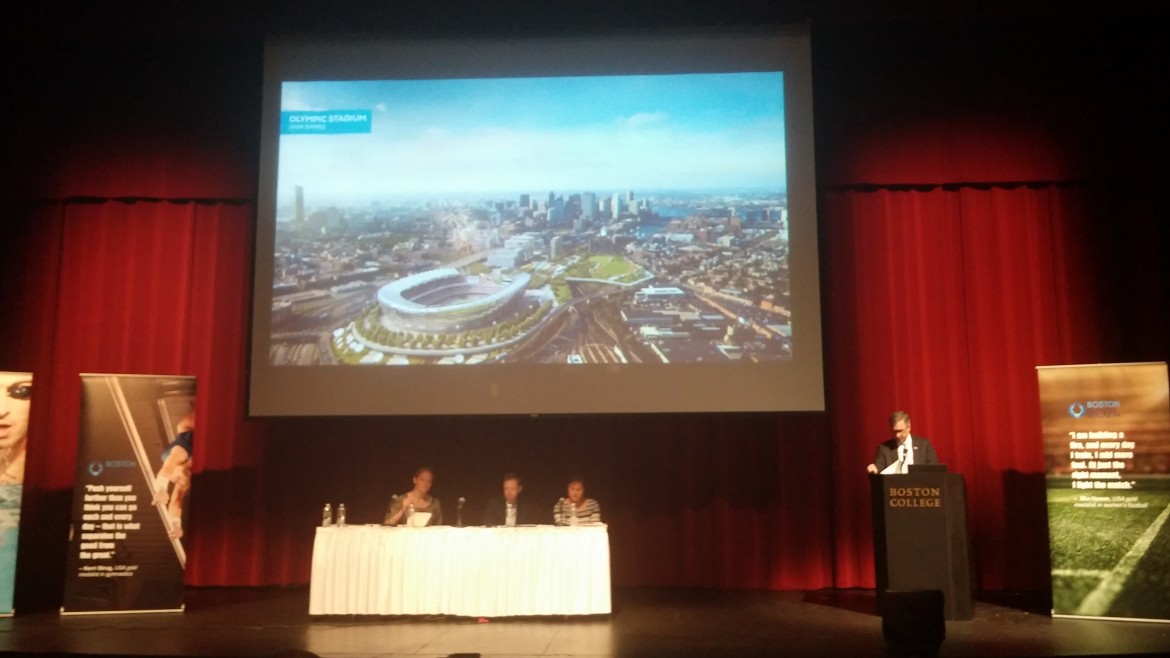 Organizers of the Boston 2024 Olympics bid show a drawing of what the Olympic Stadium would look like. 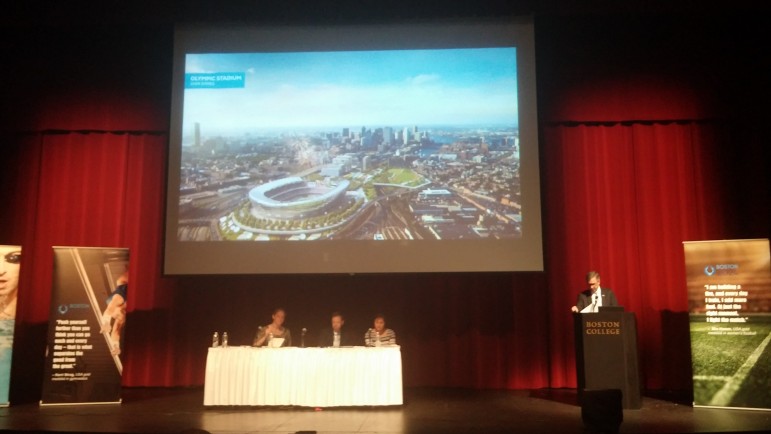 Organizers of the Boston 2024 Olympics bid show a drawing of what the Olympic Stadium would look like.

If Boston gets the Summer Olympics in 2024, the events will not be held in Watertown, but organizers said the event could be a boon for area jobs, transportation, housing and recreation areas.

The organizers of the Boston Olympic bid came to Boston College Wednesday to make their case for hosting both the Summer Olympics and the Paralympics in 2024.

Among the panel of speakers was Molly Schaus, who represented the United States as goalie of the women’s ice hockey team at the 2010 and 2014 Olympics. She dreamed of being in the Olympics since 1998 when she saw the women’s hockey team win gold, and Schaus said the experience exceeded the her dreams, that started when she was in elementary school.

Schaus and she would love to have Boston be one of the special places that hosts an Olympics. Part of every Olympics is the thousands of volunteers who welcome athletes to the area and help them get around.

“When someone mentions Vancouver or Sochi I get a special feeling. A piece of me will always be there,” Schaus said. “What a cool opportunity to make Boston than place for 10,000 more athletes.”

Newton Mayor Setti Warren said he believes the Olympics will help the Boston region meet needs it will have with or without the games.

“Think about what we want the Commonwealth to look like and be like. Look at things like transportation, affordable housing and workforce training,” Warren said. “At the end of the day, the citizens of the Commonwealth live together and move in the right direction for all these areas, and think can we use the Olympics to move the state forward.”

While Watertown will not have events in town, that does not mean residents will not get a benefit from the Olympics, said Nikko Mendoza, vice president of engagement and external affairs for Boston 2024.

“Communities in close proximity to Boston, like Watertown, are going to be important,” Mendoza said. “We want people’s ideas of what works best with the community. And we hope to deploy athletes to the community to share the Olympic spirit.”

Massachusetts voters will have a chance to vote on a ballot measure on whether to support the Olympics coming to Boston. The vote will likely take place in November 2016.

The venues for the events will include existing arenas and stadiums, such as the TD Garden (for basketball, artistic gymnastics and trampoline gymnastics), Fenway Park (baseball) and Gillette Stadium (soccer and rugby). See the venue planning document with drawings here.

Venues that would be near Watertown include Harvard Stadium (archery), Conte Forum at Boston College (wrestling and judo) and Boston University’s Agganis Arena (rhythmic gymnastics and badminton). BC’s Alumni Stadium is another possible venue for field hockey.

Organizers will also be looking for volunteers, Mendoza said. Any questions or inquiries can be sent by email to info@2024Boston.org

One of the largest venue, the Olympic stadium, would have to be built, said Richard Davey, CEO of Boston 2024, said a 69,000 seat stadium for the opening and closing ceremonies and the track and field events. The stadium would be 95 percent reusable or renewable, and the location, in Widett Circle – an area along I-93, south of downtown Boston. After the Olympics the area would be turned into residential and commercial developments, and have new park areas.

Other temporary venues would be in parks in Boston and other communities, Davey said. Temporary stands will be used in many cases, and the parks will have other improvements which would remain after the games.

Attendees wondered who would have access, and who could afford the tickets. Davey said ticket prices will range from $25 to “substantially more than that.” He said organizers plan to get children into events. Attendees asked for tickets to be available for those who would not normally be able to afford them.

Three sports will be free to the public, Davey said – the marathon, road cycling and rowing. The marathon and road cycling will end in Copley Square and will go through area communities, but the routes have not yet been planned. The rowing venue has not been decided, but could be in Lowell, Davey said.

Boston would benefit economically and in other ways from the Olympics, Davey said. Thousands of jobs would be created, Davey said: 4,100 leading up to the games, 54,000 during the Olympics and 2,200 after the games. Those before and after the games would mostly be construction jobs. During the games the jobs include venue management, security, IT and in tourism related areas.

Attendees said they are skeptical that the Boston area’s transportation system would be able to handle such a large event. Davey, who is former head of the Massachusetts Department of Transportation, said he believes the regions public transportation and roads can handle the influx of athletes and fans.

“Traffic in July and August dips by about 10 percent in Boston and Massachusetts with students out of town, vacationers and a lot of tourists don’t drive,” Davey said. “The same is true with the T. Ridership drops 8 percent in July and August. The games will start in mid-July and run through the end of August.”

The organizers will also contribute to improvements to the transportation in the Boston area. MBTA’s Green and Red lines need power signal upgrades, which would improve service and allow for more cars on the Green Line, Davey said. Those improvements would cost an estimated $455 million, but are not funded yet.

The organizers have proposed to fund $267 million in improvements and extension of roads in the area of the stadium and athlete village, improvements to the Boston Amtrak station and build a new commuter rail station in Widett Circle.

Thousands of new housing units will be built to house the athletes during the games, and afterward they will be used as apartments, college dorms and senior housing, Davey said. Widett Circle, where the temporary stadium would go, would have 4,000 apartments; and Columbia Point, near UMass-Boston, would have another 4,000 units, with 3,000 apartments and 900-1,000 dorm rooms. At least 13 percent will be rented or sold at affordable rates.

In total, organizers estimate putting on the Olympics would cost $4.8 billion, and they believe they can make that up through revenues from the games. Revenues include broadcast fees, major sponsorships (Coke, VISA, McDonald’s, etc.), tickets, domestic sponsorships, and licensing for the games and the torch relay.

Many said they worry about the taxpayers being left covering overruns or revenue shortfalls. Davey said $210 million of contingency funds have been built into the budget and $128 million in insurance policies will cover items from construction to lack of ticket sales.

Boston is competing for the Olympics with Paris, Rome and Hamburg, Germany. Budapest and others may also submit bids. The deadline for officially declaring as a bid city is in September 2015, and the application deadline is in January 2016.

In April 2016, the International Olympic Committee (IOC) will choose the finalists, or candidate cities. The ballot measure would take place in November 2016. The final application for candidate cities is due in January 2017 and the host city will be chosen by the IOC in the summer of 2017.