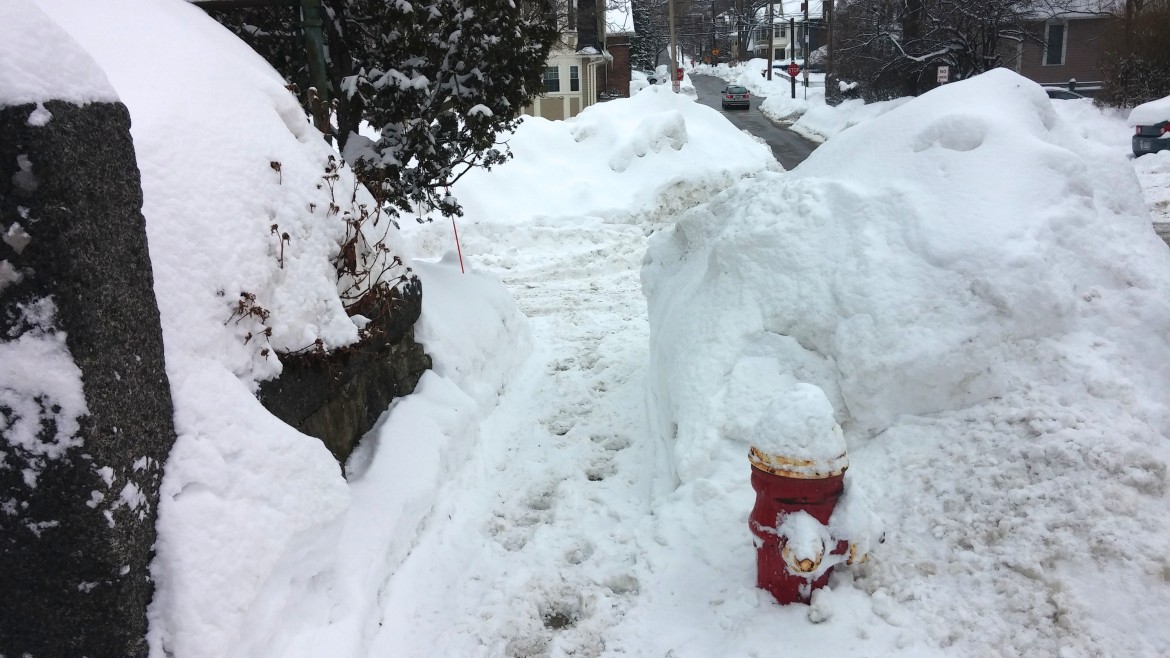 A cleared walking path in Watertown ends abruptly because a neighboring property has not cleared its sidewalk. 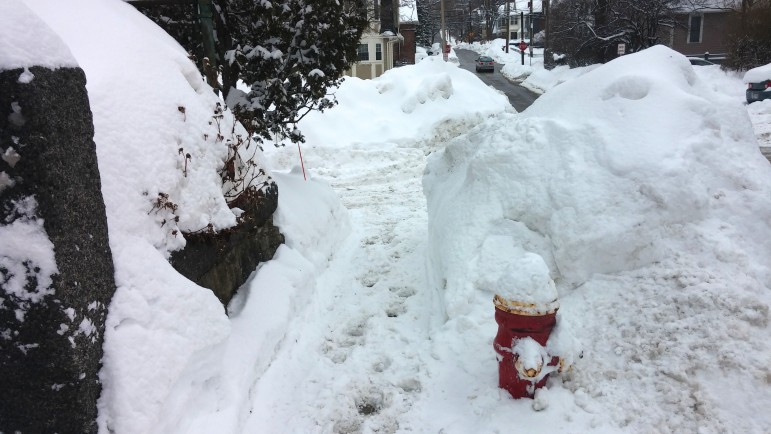 Two Council subcommittees seek to prevent situations like this where a sidewalk ends abruptly because snow on a neighboring property has not been cleared.

Avoiding a repeat of large amounts of snow piling up on Watertown’s sidewalks as it did this winter is the goal of two Town Council subcommittees, but how do to so was the big question.

The town has snow and ice removal ordinances that prohibits residents or businesses from putting snow onto public streets and sidewalks, and another that requires owners of commercial properties to shovel snow off sidewalks by 2 hours after the end of a storm.

The Councilors on the Public Works and Budget and Fiscal Oversight subcommittees and residents at the meeting Tuesday night agreed that these ordinances are not being enforced. Some say they want to take the snow ordinance a step further and require residential properties to shovel their sidewalks, but others say strict enforcement will burden some residents.

Whatever is done, Councilor Cecilia Lenk said she would like to see it made a priority.

“I would not like to go into next snow season without doing anything,” Lenk said. “What we do now is disparate. Sometimes we do nothing. Sometimes we write warnings. We do not send any tickets. Last year we saw what a disaster not enforcing (the snow ordinances) is.”

DPW Superintendent Gerald Mee said it can be hard for the DPW to track which properties had not complied with the snow rules.

Boston and Somerville issue tickets for violating the snow ordinance by taking photos with an iPad and sending it to property owners, said Town Council President Mark Sideris, who attended the meeting but is not on either subcommittee. He also heard that Somerville collected $800,000 in fines from these tickets.

That revenue was “intriguing” said Town Manager Michael Driscoll, who said he would want some sort of revenue source to fund additional staffing or shifting staff time to enforcing the snow ordinance.

The Watertown Police Department can enforce all of the town’s snow ordinances. The Town Manager, the DPW superintendent and a staff member designated by the Town Manager can enforce the ordinance preventing snow from being piled on public ways, but not the commercial ordinance.

Councilor Vincent Piccirilli said the list of those who can enforce the snow rules should be the same.

While the police can issue warnings and give tickets, they have other things to deal with, said resident Maria Saiz.

Some suggested that the town’s Zoning Enforcement Officer should be given the role of issuing warnings and fines.

“When it is snowing the Zoning Enforcement Officer is not doing building inspections, so he could look at snow ordinance violations,” said Councilor Angeline Kounelis.

Some residents say they have been waiting for tougher enforcement of the snow shoveling rules on the town’s sidewalks.

“It’s not just last year. In previous years we have had similar issues. It is a problem around public safety,” said Saiz, who is a member of the town Bicycle and Pedestrian Committee. “Other towns and cities have enforcement and it works.”

While the rule says piles cannot be left on sidewalks, the exception is at the ends of driveways, where it is OK if a 36-inch-wide path is cleared so people can walk along the sidewalk.

Even 36 inches can be a quite a challenge for some residents. North Beacon Street’s resident Dave Martin said this he could not keep up with the snow left on sidewalks by plows. Strict enforcement would also create a hardship for older residents.

“We do our best, but not all streets are equal,” Martin said. “Do we have to clear the sidewalk of natural snow fall, or are we also responsible for snow plowed on sidewalks?”

Some areas of town have little space to put snow when there is a heavy snowfall, said Kounelis, who represents the East End of town. She piled snow up to her first floor window this winter, and could not put more on top without it falling down, and this is common in her district.

“I can’t burden the people of the East End who will be fined for attempting to do something but are not able,” Kounelis said. “Certainly there are people who blatantly disregard the ordinance, but there are good people who try but cannot comply.”

The subcommittees were supposed to discuss a residential snow removal ordinance, but decided to wait until a future meeting to get into that issue.

Town Council Vice President Steve Corbett said he favors not only increased enforcement of current ordinances, but also would like to see a new ordinance requiring residential properties to clear snow off sidewalks.