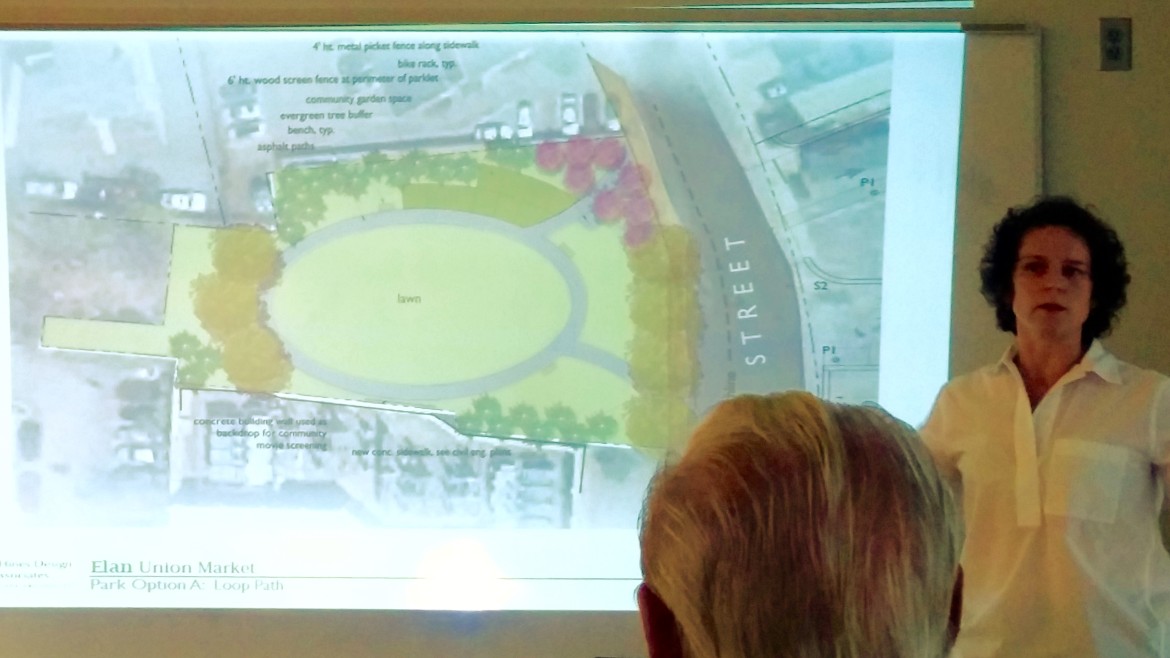 Landscape architect Katya Podsiadlo shows a possible layout for the new park being built by the developers of the Elan apartment complex. 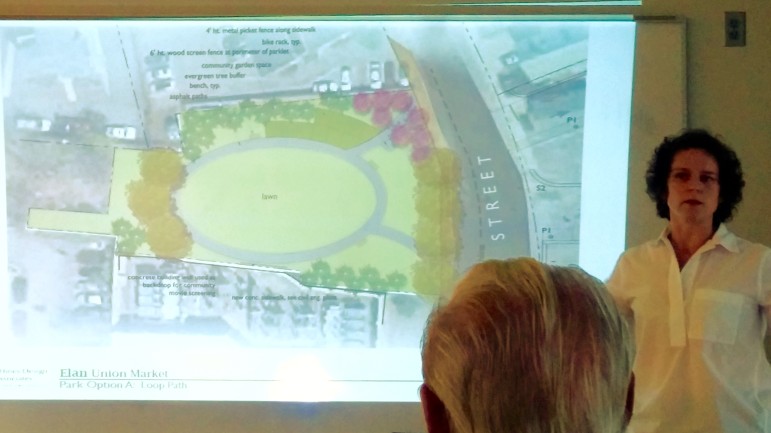 Landscape architect Katya Podsiadlo shows a possible layout for the new park being built by the developers of the Elan apartment complex.

Residents told developers of the half-acre park on Irving Street that they would like to see a nice green space where they can get outside, relax and perhaps play ball with their little kids.

Representatives from Greystar, which is building the Elan apartment and retail complex at Arsenal and Irving streets, gathered ideas during the first of two meetings held to help design the small park. The park would be owned and run by the developers of the complex.

Landscape architect Blair Hines of Blair Hines Design Associates, said the park is quite small. It could fit one full-sized basketball court, but he said that would likely not be the right use of the land. It sits across from the new apartments, and near existing homes on Irving Street.

“It could have people playing at night and potentially creating noise,” Hines said.

Katya Podsiadlo, a landscape architect with Blair Hines Design Associates, showed a plan that included a grassy space with an oval path around it with benches. There were trees around the perimeter, and there could be 10 or more small plots for community gardens.

“Another park would be a good addition to town,” Daly said. “We could always use more open space.”

A few residents said a gazebo or some other place where people can get out of the sun or rain would be a nice feature.

Resident Roberta Miller said the Watertown Community Gardens group is always looking for more plots, and with more apartments being built in town they could be a welcome addition.

Those already living on Irving Street said they would welcome a clean up of the property, which is now used by a towing company. They said there are rats and other pests on the site. It has tracks from the former rail line that ran through the property, which will be removed.

Some talked about adding a bike path to connect Arsenal Street to Watertown Square. Architects looked at connecting to Gilkey Court, a dead end street which ends near the park property. Councilor Cecilia Lenk said that is a private way, so it would be difficult.

Resident Lisa Feltner, who is president of the Concerned Citizens Group, said she would like to see the path to go through the park, and continue along the former rail line to Taylor Street which would then connect to Mt. Auburn Street. The rest of the former rail line is not owned by developers, but Feltner said she hoped something could be worked out.

The site has a building on it that dates back about 100 years, but Podsiadlo said it does not have historic significance. It could be used as a building headquarters during the construction of the Elan apartments, but will be torn down.

Some have said the spot could be used for outdoor film screenings. Podsiadlo said vines must be removed from the wall of the neighboring property used by Eversource to house electrical equipment. The park could work well for movie showings.

“The property slopes. The (north side) is about four feet higher than the other side,” she said.

Greystar will hold a second meeting to get more input from residents. The time and place has not been announced.