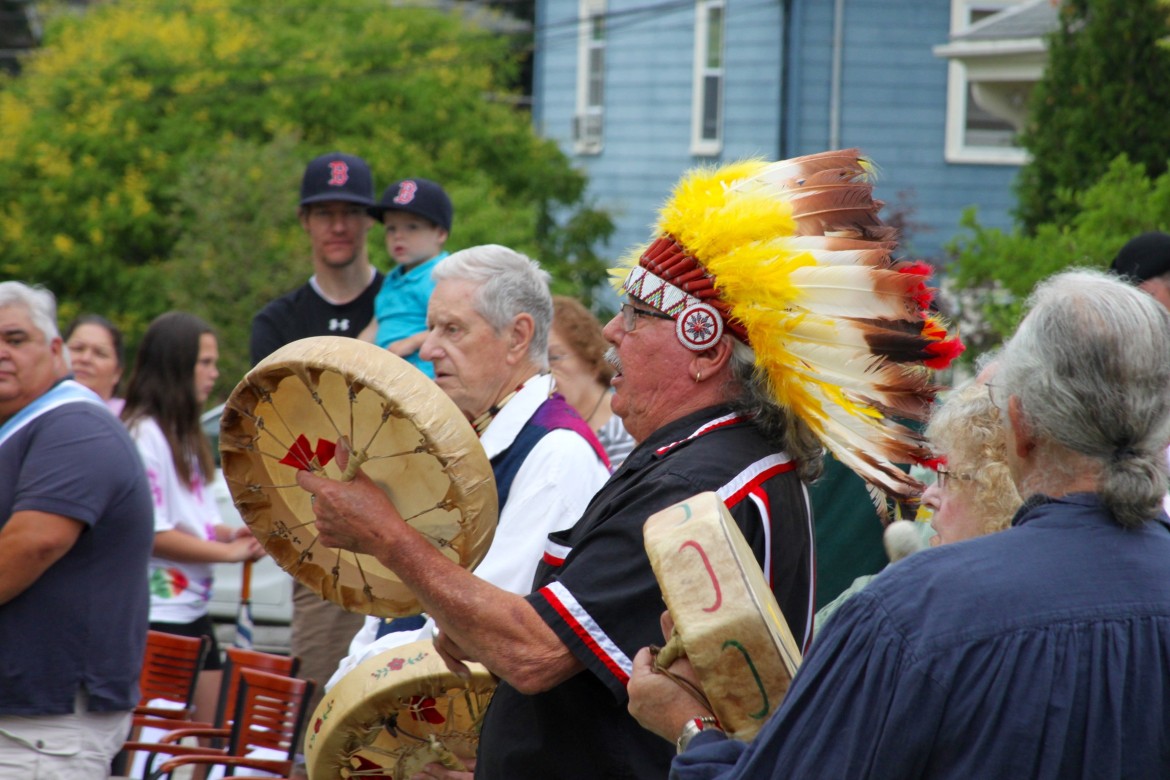 Members of the Mi'qmak Indian tribe sing and play drums during the reenactment of the signing of the Treaty of Watertown - the first foreign treaty signed by the United States. 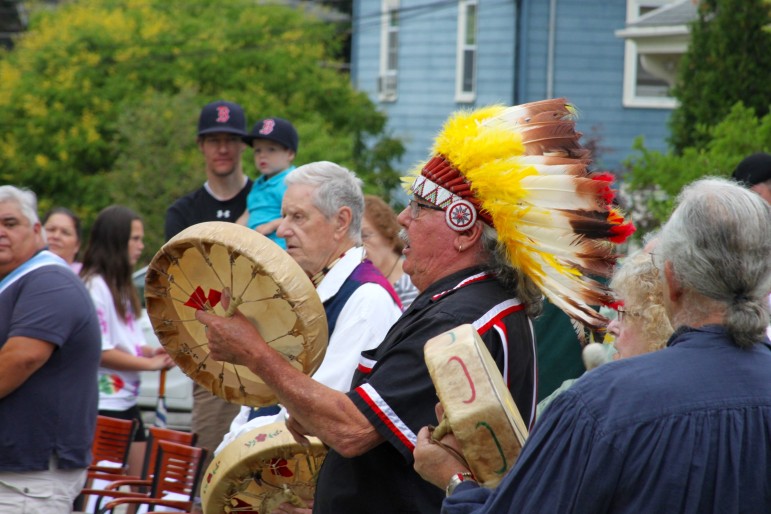 Members of the Mi’kmaq Indian tribe sing and play drums during the reenactment of the signing of the Treaty of Watertown – the first foreign treaty signed by the United States.

Descendants from a treaty signing that took place in Watertown more than three centuries ago gathered on town for the reenactment and celebration of two historic events that took place in town when the United States was just days old.

On Saturday, the Historical Society of Watertown held its annual reenactment of the first reading of the Declaration of Independence in Massachusetts and the signing of the Treaty of Watertown. The treaty was the first signed by the fledgling nation with a foreign group, in this case with two tribes of American Indians – the Mi’kmaq and the Maliseet (or St. John’s) Indians.

The Declaration of Independence arrived in Watertown on July 16, 1776, and was read for the first time in Massachusetts two days later from the window of the Council Chamber in the Meeting House, which used to stand where the Common Street Cemetery now sits. The reenactment was in the Edmund Fowle House on Marshall Street, which served as the council chamber, and now is home to the Historical Society of Watertown. The house is the original, but has moved about 300 feet from the corner of Marshall and Mt. Auburn streets. 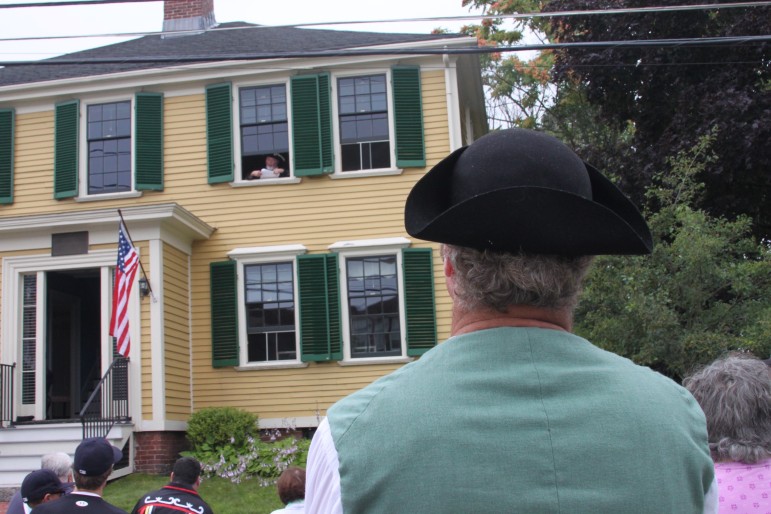 A colonial re-enactor listens to a reading of the Declaration of Independence from the Edmund Fowle House on Marshall Street during the Historical Society of Watertown’s celebration.

Pettito Devaney is the first member of the Governor’s Council from Watertown, and she explained that the elected body of eight Councilors approve nominations for judge, to boards such as the Parole Board and oversees the state budget and expenditures.

On Saturday, Bob Childs read the entire document from the second story window of the yellow house. 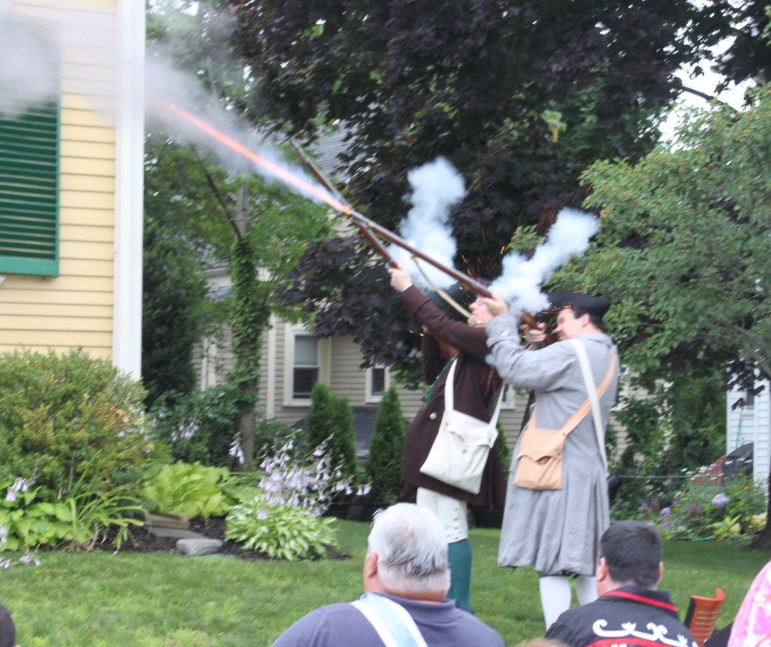 Colonial reenactors fire muskets to celebrate the reading of the Declaration of Independence, which was first done in Massachusetts in Watertown on July 18, 1776.

On July 19, 1776, the Treaty of Watertown was signed by members of the Governor’s Council and delegates of the Mi’kmaq and Maliseet tribes, which are located in what is now Maine and Nova Scotia, Canada.

One of the signees of the treaty, representing several Maliseet villages, was Ambrose Bear (his name was changed to Var on the document). Bear’s ancestor Henry Bear came down to Watertown from Maine. He serves as the Maliseet representative to the Maine House of Representatives. 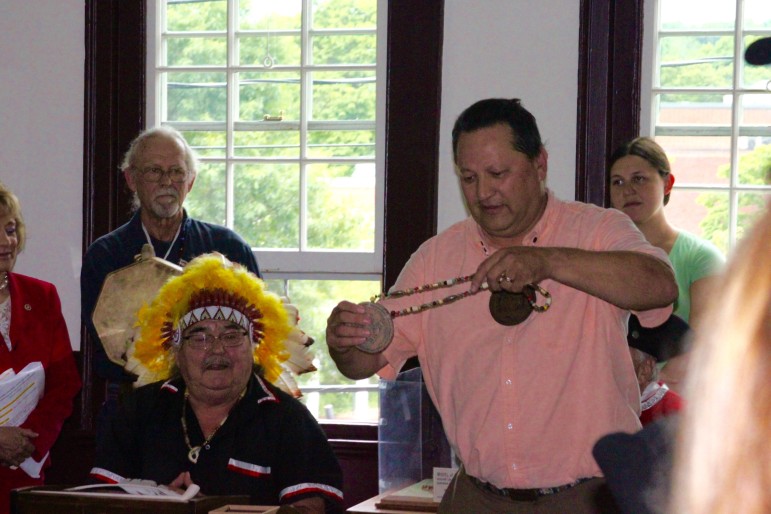 Henry Bear, right, prepares to give a medallion to Roland Jerome, left. Bear is the descendent of one of the signers of the Treaty of Watertown.

Bear attended the event last year, and for the first time this year a member of the Mi’kmaq tribe came down from Nova Scotia for the event. Ron Knockwood was appointed as district chief by the Segepenegatig District Council.

“I heard a lot about Watertown and I said, I have to come down,”

For many years, Roland Jerome, who is chief of the United Native American Cultural Center in Devens, has represented the Mi’kmaqs at the reenactment.

“I said I would be chief until someone from Nova Scotia comes down and I will pass it on,” Jerome said. “Today he has come. But that doesn’t mean I won’t be here next year.”

Also at the celebration was Wallace Dailey, the accessions archivist at the Massachusetts Archive, who presented a reproduction of the original treaty. The original is now housed at the Archive along with the copy of the Declaration of Independence read in Watertown in 1776, Dailey said.

{Note: The first version of the story erroneously stated that the State Legislature signed the Treaty of Watertown. It was the Governor’s Council.} 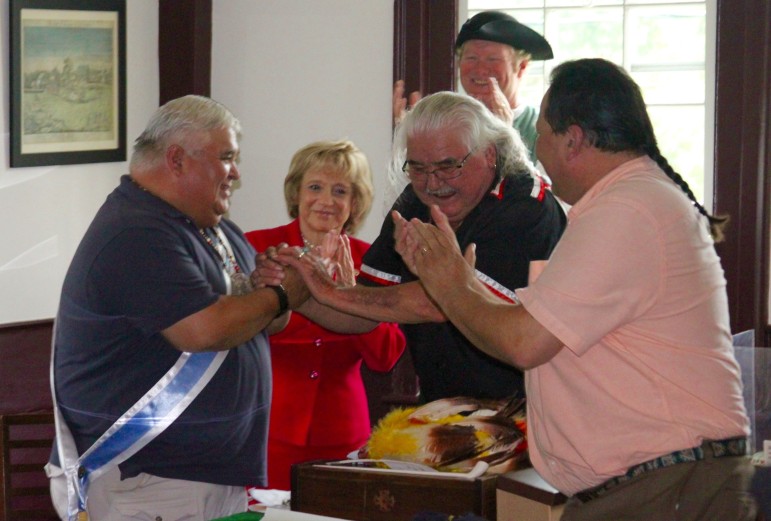 Roland Jerome, center, shakes the hand of Ron Knockwood after Jerome passed the role of the “chief” of the Mi’kmaq Indians during the reenactment of the Treaty of Watertown. Looking on is Governor’s Councilor Marilyn Pettito Devaney of Watertown, and Henry Bear, right, who represents the Maliseet Indians in the Maine House of Representatives.