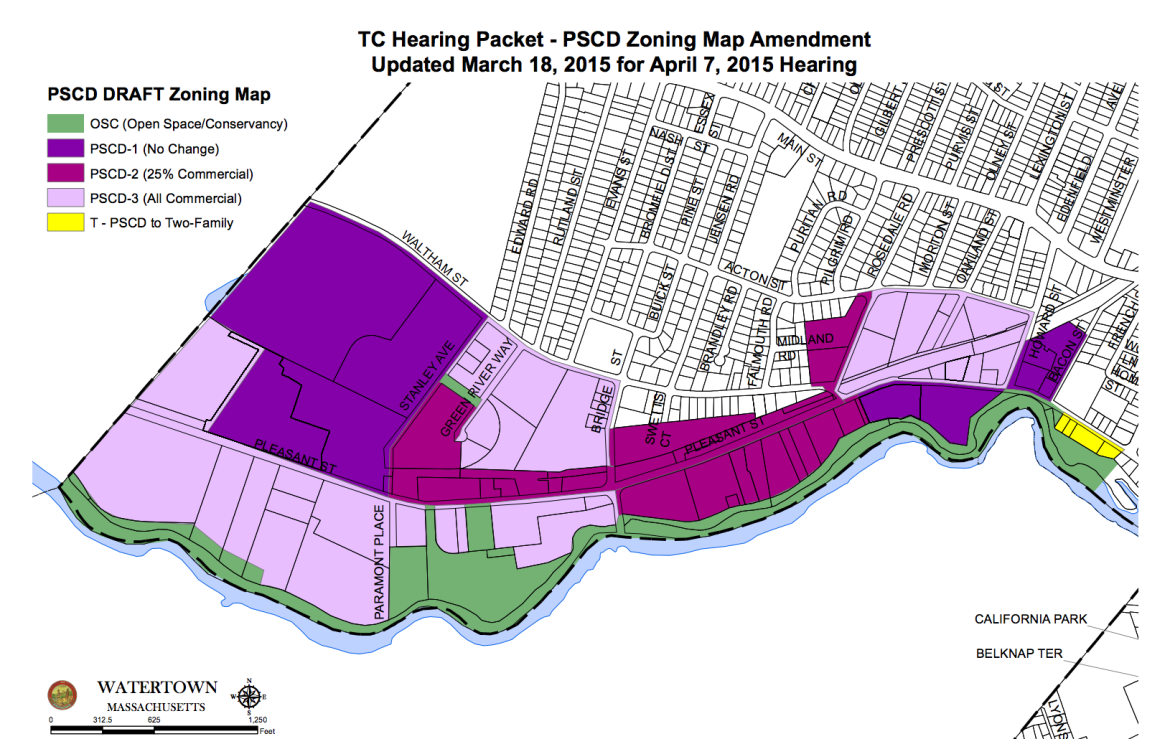 Proposed new zoning area in the Pleasant Street Corridor District on the westside of Watertown. 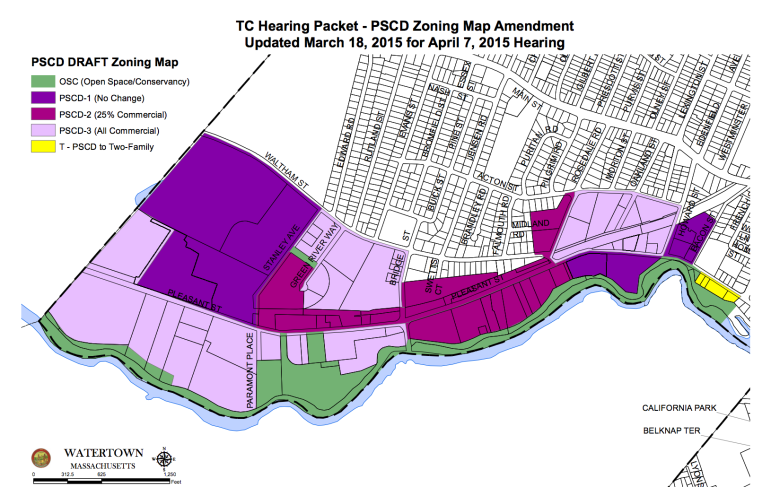 Proposed new zoning area in the Pleasant Street Corridor District on the westside of Watertown.

Tuesday night, the Town Council approved some major changes in what kinds of developments will be allowed in the Pleasant Street Corridor.

The changes to the Pleasant Street Corridor District Come just seven years after the area first got special zoning. Town Council President Mark Sideris said the original intent to provide a variety of new developments on unused or underused property did not turn out the way the Council had intended. Instead of a mix of properties, the town got several large residential projects.

“Several members were on the Council when we put in the Pleasant Street Corridor District zoning,” Sideris said. “When I saw what happened with the Haartz Mason building (now the Riverbend Apartments) I really became uncomfortable with (the zoning).”

The new zoning makes it harder to build residential properties, tries to reduce the “canyonization” effect by pushing buildings farther from the sidewalk and making taller building push upper floors back from the facade.

John McDonald, who’s company has property on Pleasant Street and Bridge Street, said that businesses need to know what to expect from zoning.

“My concern is instability,” McDonald said. “The area was just rezoned in 2008.”

Councilor Vincent Piccirilli said larger property owners can propose special zoning for their area, such as the Arsenal on the Charles owner athenahealth has proposed.

Westside Town Councilor Ken Woodland said there have been eight meetings to discuss the zoning changes, and said was time to vote on the changes.

“The original intent of the corridor was intended to bring mixed use to the corridor,” Woodland said. “If we do not pass this we will not get commercial projects. As we have seen the market has not brought commercial.”

When the Council finally voted, they passed the zoning changes 8-1, with Angeline Kounelis opposing them because she worries about parking requirements being too low and would result in more cars parking on neighborhood streets.

Some residential developments, or which include housing, will be allowed, but only in certain areas. The revised zoning splits the area into three different zones.

Traffic remains a concern for many. Several of the residents at the meeting said traffic has become much heavier since the new apartment buildings went up.

Councilor Aaron Dushku said he wants larger properties to monitor the number of vehicles going in and out of their parking lots, as well as how full lots get. He proposed an amendment to have properties over 10,000-square-feet provide data on vehicular traffic.

While many on the Council said they liked the idea, they said the believed the idea needed more work.

“I think it is a good concept and it could apply townwide,” Kounelis said. “There are too many unknowns to vote on it (Tuesday).”

Dushku ultimately withdrew his amendment, and the Council referred the idea to the Economic Development and Planning Subcommittee to discuss further.

Fearing that employees and residents from new developments will park on neighborhood streets, some residents did not like the idea of reducing parking requirements by 25 percent if developers show they are promoting alternative ways to commute besides driving. One way would be joining a transportation management association to create at shuttle or transit service that would be open to both employees and the public.

Kounelis proposed an amendment that would cut the potential parking reduction to 15 percent, instead of 25 percent, but no other Councilor would second the proposal.

While residential developments have been a seen as a problem by many, a number of Councilors said they wanted to allow a small amount in the area along the Charles River, which is part of PSCD-3, which allows no residential or even mixed use parcels.

Assistant Town Manager Steve Magoon, who oversees Community Development and Planning, said those properties are some of the few zoned for commercial and industrial.

“It is important to maintain a balance for the tax base,” he said.

Still, Councilor Tony Palomba made and amendment to allow one- and two-family homes in the PSCD-3 zone. The measure was voted down 7-2 with Palomba and Dushku supporting it.

Some other changes to the Pleasant Street Corridor zoning approved Tuesday include: