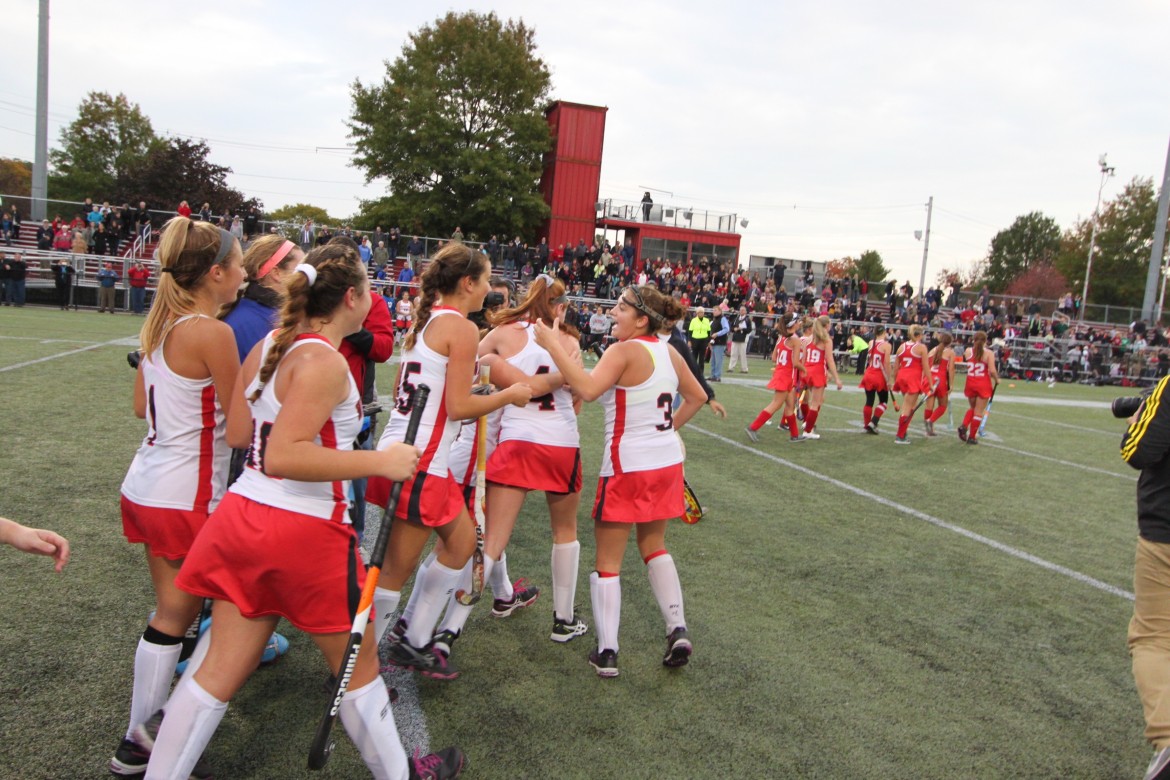 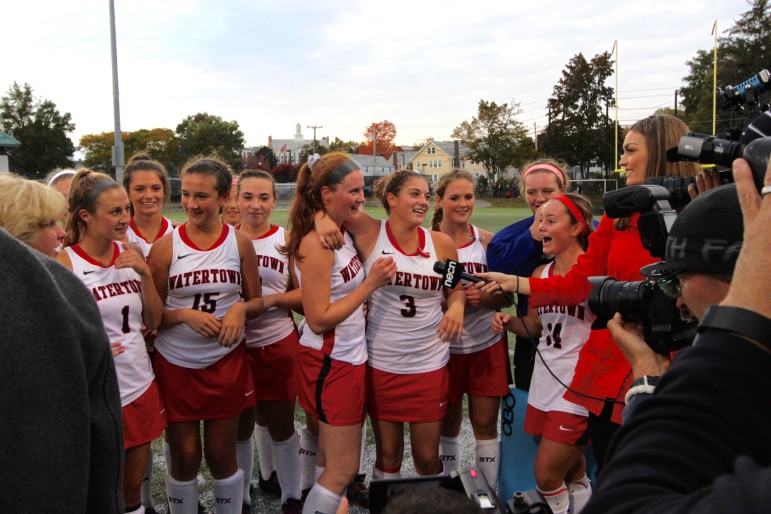 Watertown senior Michaela Antonellis has her arm around fellow co-captain senior Ally McCall during an interview after the Raiders clinched the national record unbeaten streak of 154 straight.

Watertown’s field hockey players hugged and danced on the field after setting a new national record for the most straight unbeaten games by a high school team Wednesday afternoon, but they were also quick to acknowledge the players that game before them.

After beating Melrose 6-0 and extending their unbeaten streak to 154 games, the Raiders invited all the former players in the stands to come down to pose with them for the throngs of media at Victory Field. They came in droves, some with children in hand.

Coach Eileen Donahue was glad to see her former players in attendance. 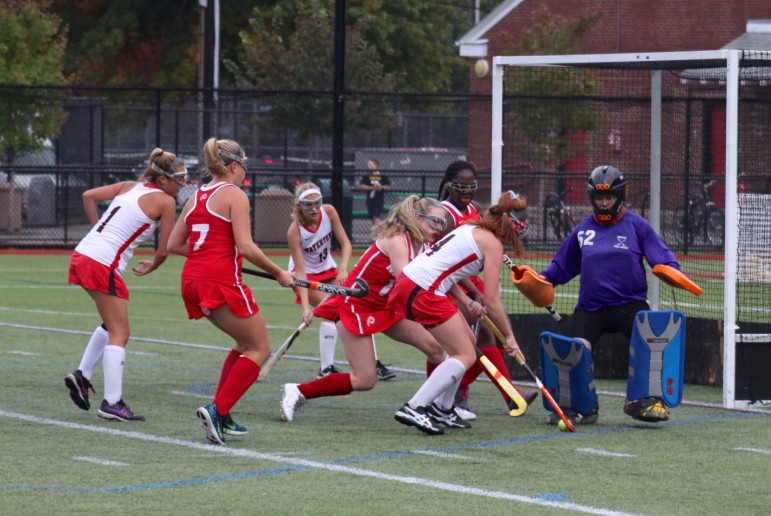 Watertown senior Ally McCall, No. 4, passes to teammate Grace Duguay who scored one of her two goals in the 6-0 win over Melrose for the record streak clincher.

When asked about breaking the record, senior co-captain Michaela Antonellis said: “It’s unreal, just the feeling … we are proud of everybody.”

“And all the teams the last six years,” Co-captain Ally McCall added quickly.

The streak, now close to seven years long, started a long time ago. Most of the team was in elementary school when the streak began in the fall of 2009. The seniors were sixth-graders at the middle school. 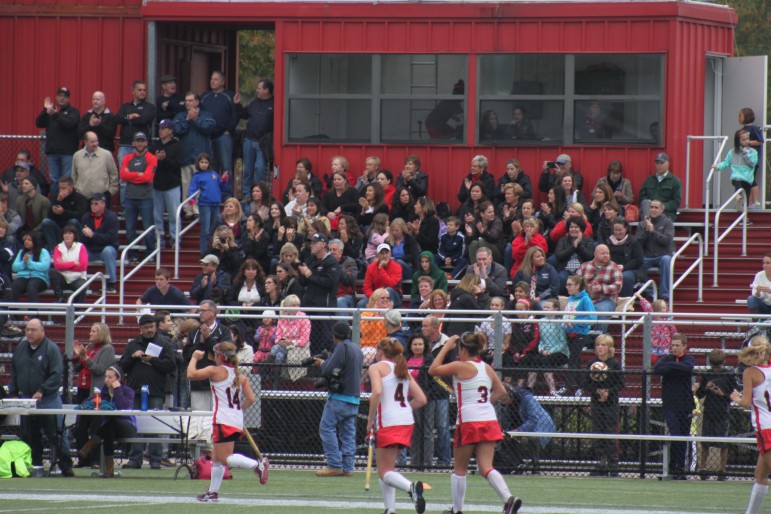 The Raiders got an ovation from the large crowd at the end of the first half of their streak clinching game at Victory Field.

The attendance was the size of a good football crowd, with the stands more than half full, and plenty of people standing along banisters and fences. In the second half, the game long over, a group of young children started chanting “Let’s go Watertown!”

The players appreciated the support.

“It’s different because not a lot of people come to field hockey,” Antonellis said. “The support this town has showed has been unreal today.”

The fans enjoyed being part of an historic afternoon. One fan leaving the game said, “It’s nice for Watertown to be famous nationally for something positive.” 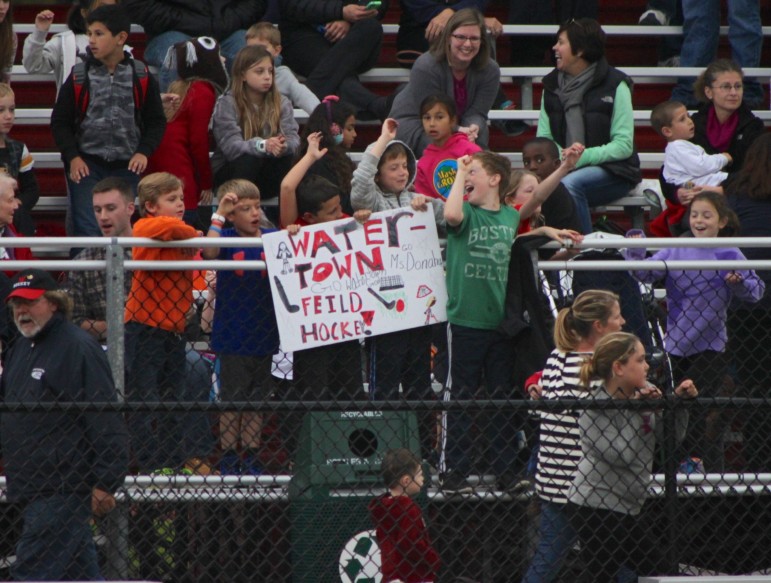 A group of children hold a sign cheering on the Watertown field hockey team in their 154th straight unbeaten game.

Watertown broke the record of Voorhees Eastern High School in New Jersey. Asked if they would want to play Voorhees Eastern, Antonellis responded, “That would be an awesome game.”

If and when the Raiders lose, Voorhees Eastern has a long streak of its own going, 122 unbeaten as of Thursday.

The Raiders have another national record not far off on the horizon. The national record winning streak is 106 set by Oklahoma City Casady School. Watertown now has 94 straight victories. 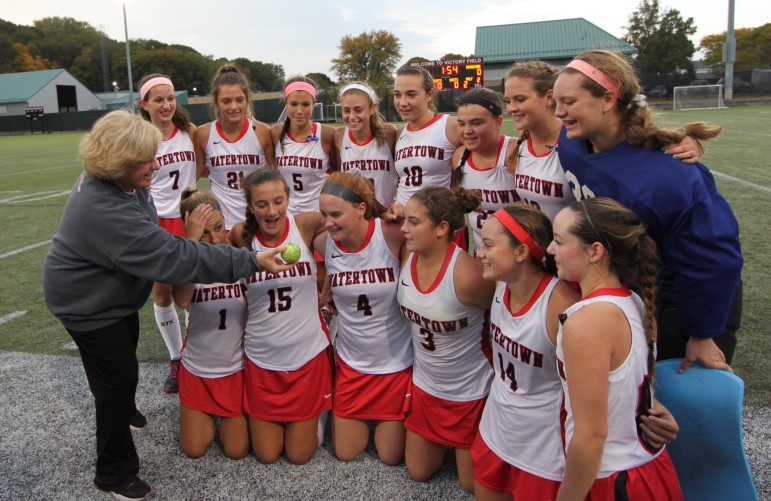 Donahue will not let the team get blinded by the spotlight. The day before the record streak clincher she put her team through a tough practice, the players reported.

Asked about keeping the steak going, Donahue said she will continue to work on getting the team focused.

“I am just going to focus on tomorrow’s practice,” Donahue said. “I am glad they can enjoy it today, because tomorrow is another practice. There a lot of talented programs out there and we have to prepare for them.”

Watertown has one more regular season game, Friday at 3:45 p.m. against Wakefield at Victory Field, then the playoffs, and the drive for a seventh straight state championship begins. 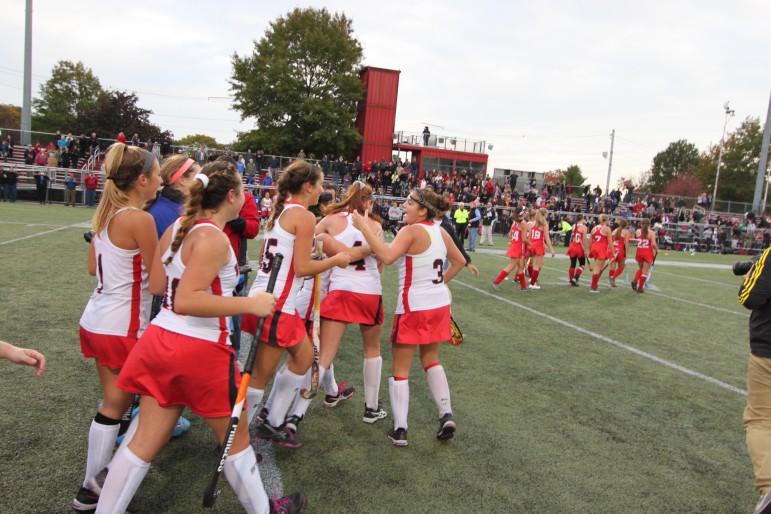