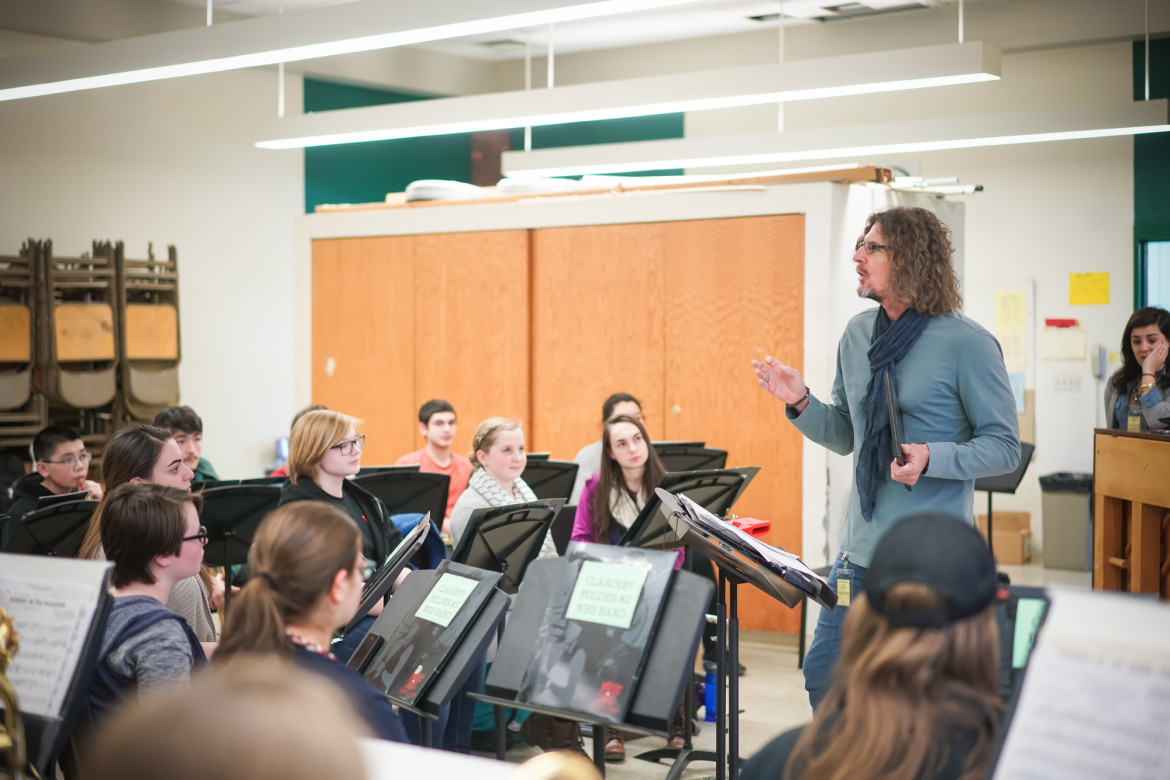 Ernie Boch Jr. dropped by a music class at Watertown High School to help celebrate the donation of $10,000 in musical instruments to the district.

Ernie Boch Jr. dropped by a music class at Watertown High School to help celebrate the donation of $10,000 in musical instruments to the district.

Watertown students will be making some sweet music on some new instruments thanks to a gift of $10,000 worth of new music equipment given to the Watertown Public Schools by Ernie Boch Jr.

The Norwood-based automotive dealer recently donated 18 pieces of new music equipment for the music program through a grant from his charity Music Drives Us. Boch visited Watertown High School Wednesday to present a plaque commemorating the award, and to listen to the 30 member high school band perform. He said that he started the charity 10 years ago to supplement budget cuts to school music programs.

“Every study tells us that if you study music at a younger age it makes you a better person in many, many ways,” Boch said. “It actually rewires your brain. It helps you learn a second language easier, music is a second language.

“There’s so many benefits to it, and out school system, for some reason, they keep cutting the music programs. So Music Drives Us it trying to do whatever we can to keep music in the schools.”

In Watertown, that commitment translated into 12 new hand-drums, two full keyboards, including stands and amplifiers, two base clarinets, one baritone saxophone, and pBone, or plastic trombone.

Dan Jordan, band instructor for the elementary, middle, and high schools, said that the new equipment would have a significant impact on the program. 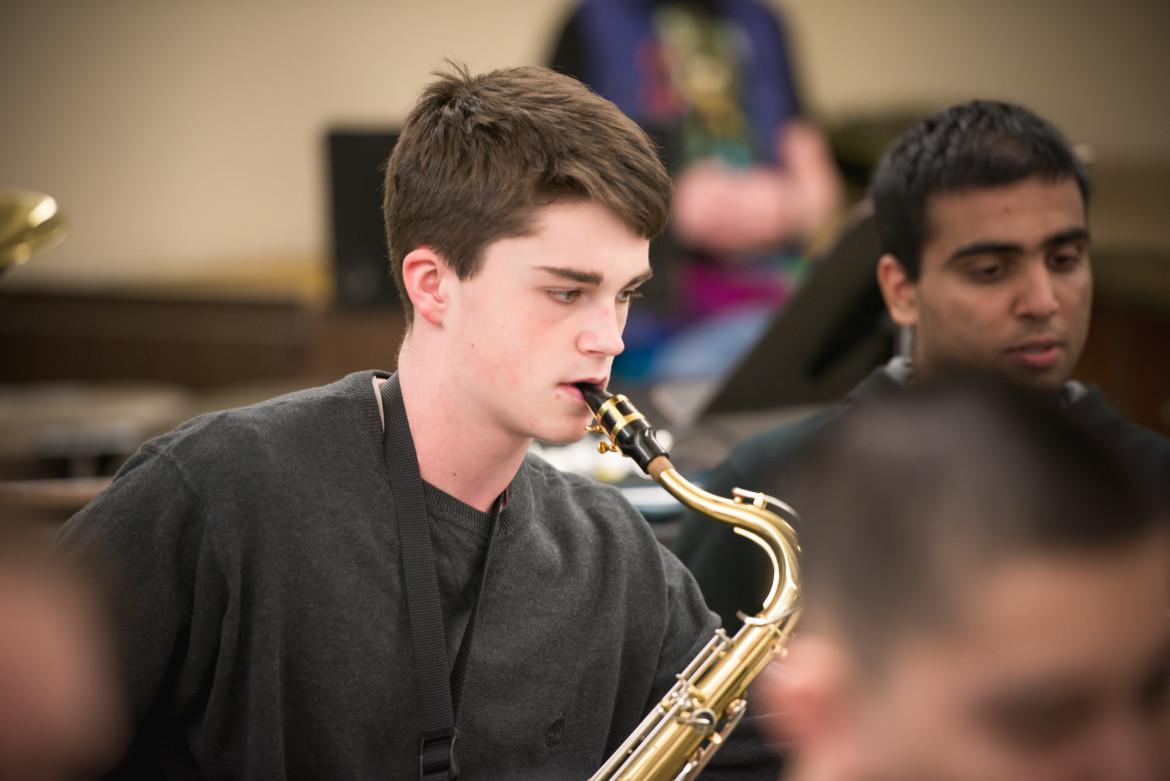 This baritone saxophone was donated by Music Drives Us as part of a major donation to the district.

Magen Slesinger, Coordinator of Fine Applied Performing Arts at Watertown Public Schools also said she was thankful to Bosh and Music Drives Us for their gift to Watertown Schools.

“That baritone sax costs more than our entire music budget at the high school,” Slesinger said. “It would have been completely out of our reach.”

“He brought the best one,” said after Boch presented the pBone to the class.

Holt said that the pBone was very similar to a trombone.

“It lighter, much lighter,” Holt said of the pBone. “If I were to march, it’s very steady. The tone is a little bit different, and it’s blue.”

Though she wasn’t sure which school was going to get to keep the pBone, she said she was going to use it as much as she could while it was at the high school.

“I don’t know where this is going. It might go to the elementary school,” Holt said. “But if we play for the rest of class I’m going to use it.” 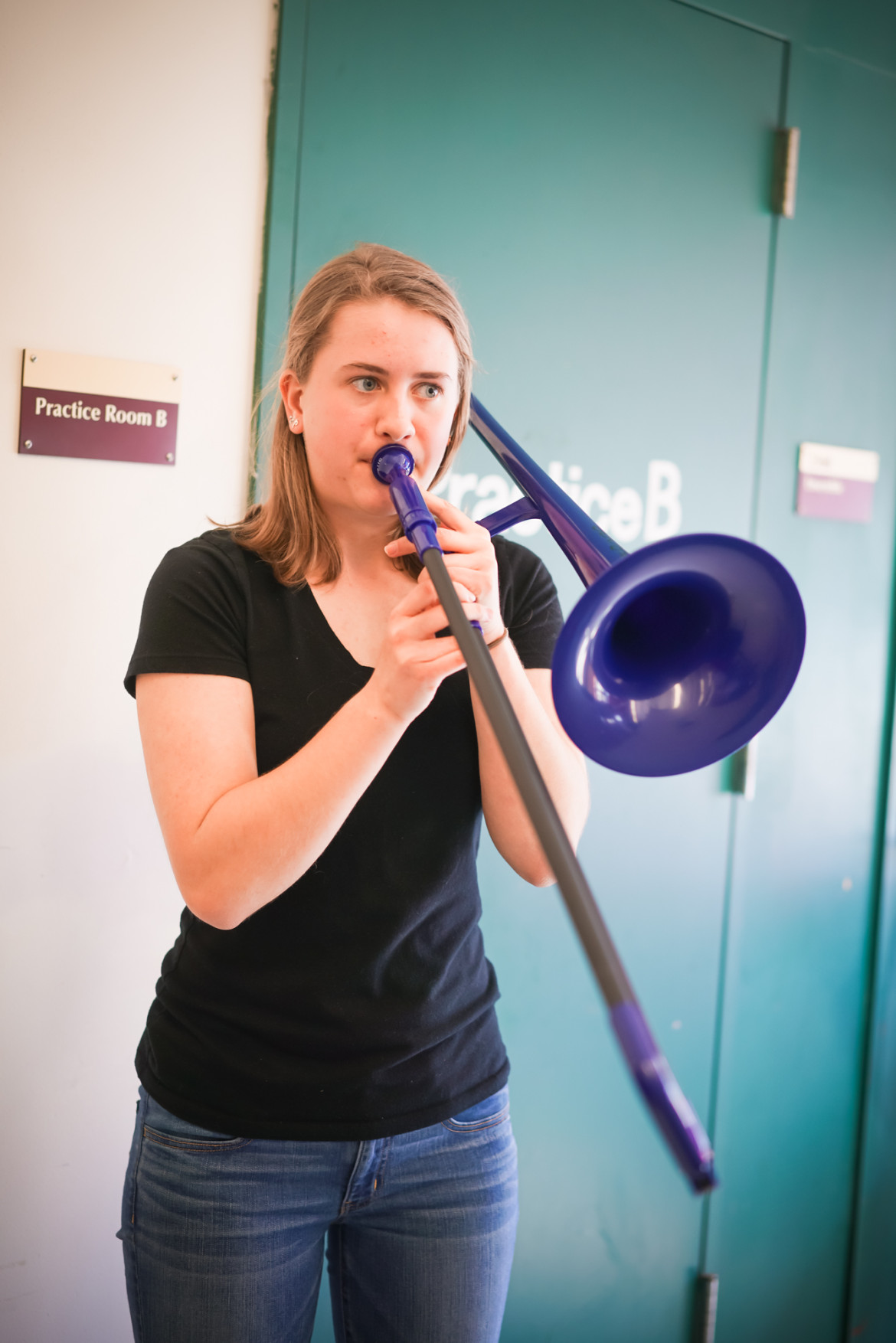 Watertown High School student Catherine Holt plays a pBone – a plastic trombone – which was donated to the district by Ernie Boch Jr.’s charity, Music Drives Us.

Senior Jeremy Holt was playing the school’s new baritone saxophone during the band’s performance for Boch, and said he could notice a significant different from his old instrument.

“The one we had before was full of dents,” Holt said. “It could barely play the low note, [and] had trouble with the high notes. [It was] really heavy cumbersome, really awkward, but this is a lot better to play.

“It’s just what a bari sax is supposed to be like,” Holt said.

You can hear of Watertown’s young musicians perform at MusicFest on Friday, April 8 from 5:30-9:30 p.m. at Watertown Middle School, which benefits Friends of Watertown Music.

One thought on “Gift from Ernie Boch Jr. to Watertown Schools Will Make Sweet Music”