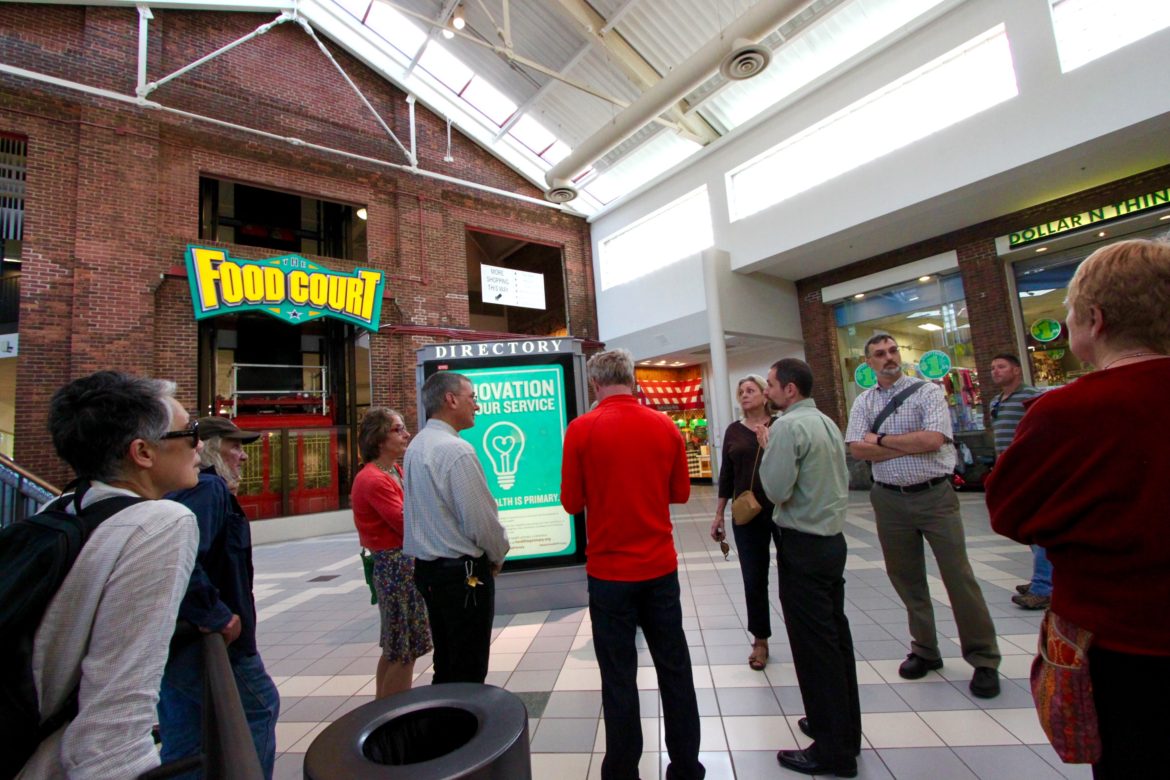 This atrium area inside the mall will become an outside grassy area linking the mall with Arsenal Park under plans for renovating the Arsenal Mall.

This atrium area inside the mall will become an outside grassy area linking the mall with Arsenal Park under plans for renovating the Arsenal Mall. The brick facade will remain.

Interested residents got a firsthand look at where the buildings at the Arsenal Mall will be going in the newly renovated mall.

Wednesday evening, the folks designing the mall led a walking tour of the area to try to give people a better idea of how the new project will look.

There will be some major changes, including three buildings in what is now the main parking long in front of the mall. Also, a residential tower at least 12 stories high.

Some familiar things will remain – the two long historic brick buildings that date back to the time when the property was part of the Watertown Arsenal. Gone, however, will be the 1983 addition that links the two long buildings along with the underpass that drivers can now use to drive from the front lot of the mall to the one behind Home Depot.

Standing in the large atrium below the stairway leading down from the food court, Jeffrey Heidelberg, project manager for Boylston Properties, told the tour the area would become a wide, green walkway linking the mall to Arsenal Park. 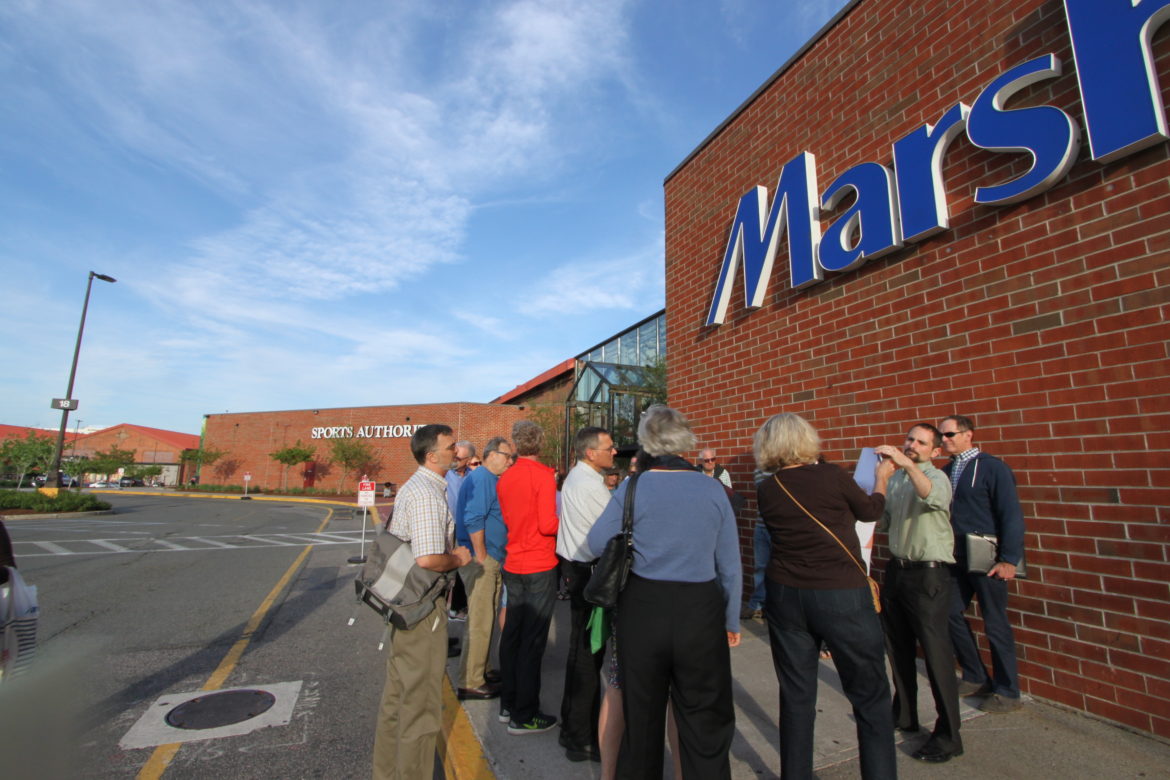 The tour of the Arsenal Project stand in front of the mall. The building with Marshalls will remain, but the addition added in 1983, including the section with the Sports Authority sign will be torn down.

“We’re in the middle of the green space,” Heidelberg said. “We will re-expose the brick facade.”

Unlike the current layout, most of the stores in the new mall will have outside facing entryways, Heidelberg said.

On the other side of the green area, known as the River Green, will be a building with one floor of residential, three floors of parking and a couple stories of residential on top.

One of the back corners of this new building will be near the corner of Arsenal Park – the end with the tennis courts. There will be cafes, outdoor seating areas and a restaurant in that area.

Tom Wilder, of the company managing the mall – Wilder Cos. – said designers hope to work with the town to make improve the park, too.

“We are open to working with the town to improve the park,” Wilder said. “We are designing our buildings to activate the park.” 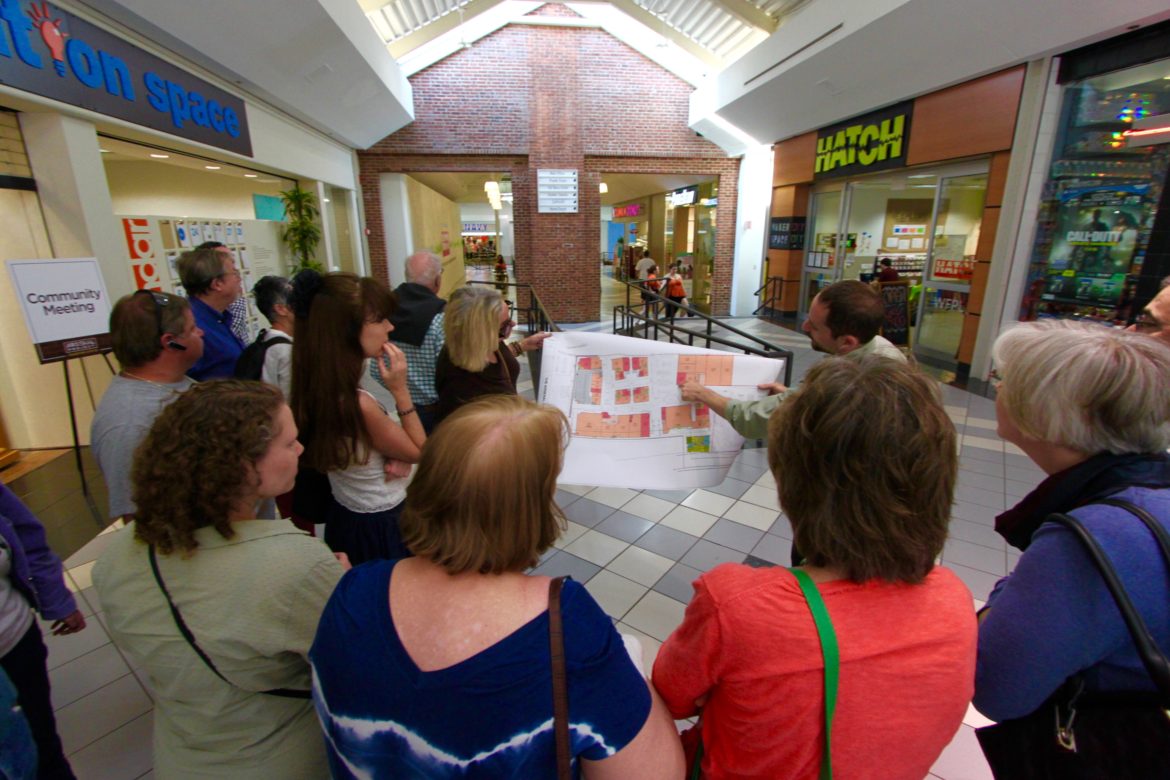 The new part of the mall, where the tour group is standing, will be demolished, but the brick wall of the building where Old Navy is located will stay.

Resident David Leon suggested that a walking path be created from Greenough Boulevard, through the back of the property to Arsenal Park and into the Arsenal on the Charles. The mall owners said not all the property belongs to them, but Leon asked them to work on that.

“You, the town and Athenahealth (owners of the Arsenal on the Charles) can work together (on the path),” Leon said. “It’s a three legged thing.”

The front lot will have new buildings covering most of the current parking area. Designers plan to keep the three major entryways off Arsenal Street. The main entryway will continue to serve that purpose. The one to the west, near Harvard Vanguard Medical Associates, will have bike paths on both side to link bike paths along Arsenal Street to Arsenal Park and the Charles River beyond, Heidelberg said.

The buildings along Arsenal Street will be six stories high and have retail on the bottom and apartments on top.

More drawings and illustrations can be found on the project website, www.corbanize.com/arsenal-project.