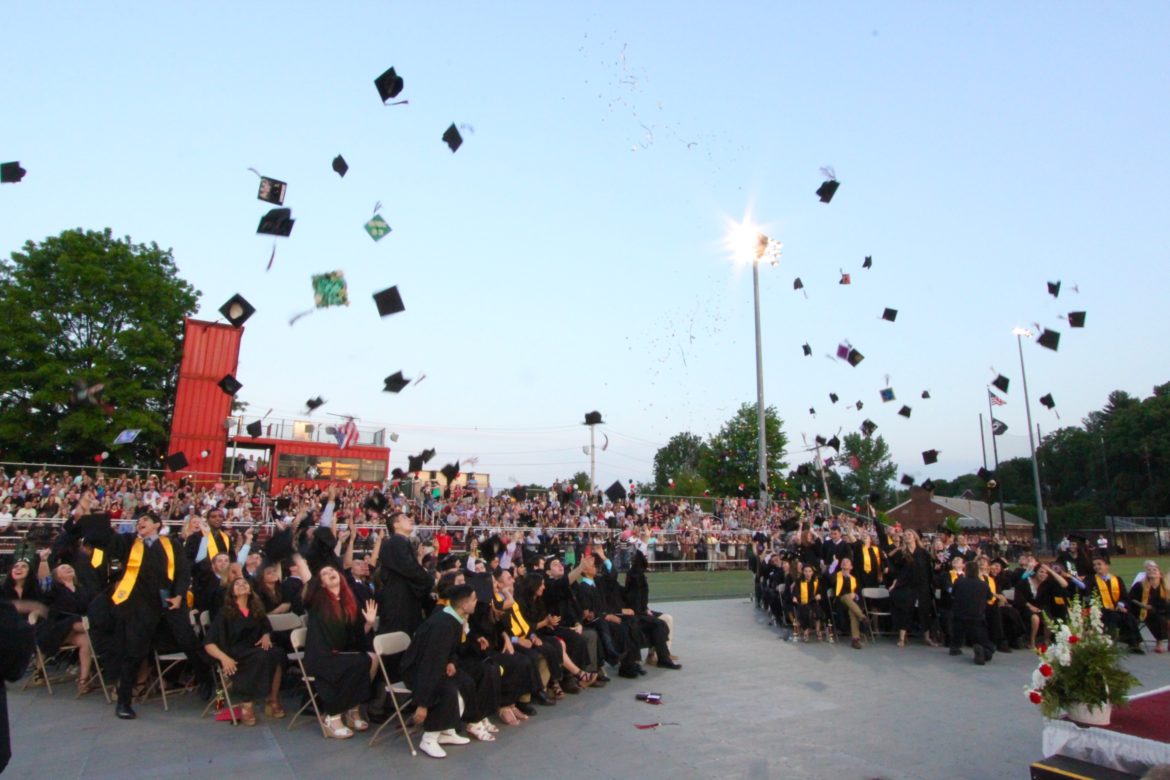 The hats fly as the Class of 2016 celebrates their graduation.

The Class of 2016 bid farewell to Watertown High School in a way that seemed to fit their class, and the school in general – with some humor, good spirit and kindness.

Principal Shirley Lundberg noted that the school had been examined thoroughly by a team of accreditors this spring, who looked at all parts of the school, the classes, the teachers, along with the students and their work. Many of the accreditor team’s tours were lead by WHS students, and afterward they told Lundberg one thing that stood out about Watertown High.

“They said their entire team had one large impression. They found community of Watertown High School to be extraordinarily kind,” Lunberg said. “I was struck by what a tremendous compliment the team paid to the Watertown community and the high school.” 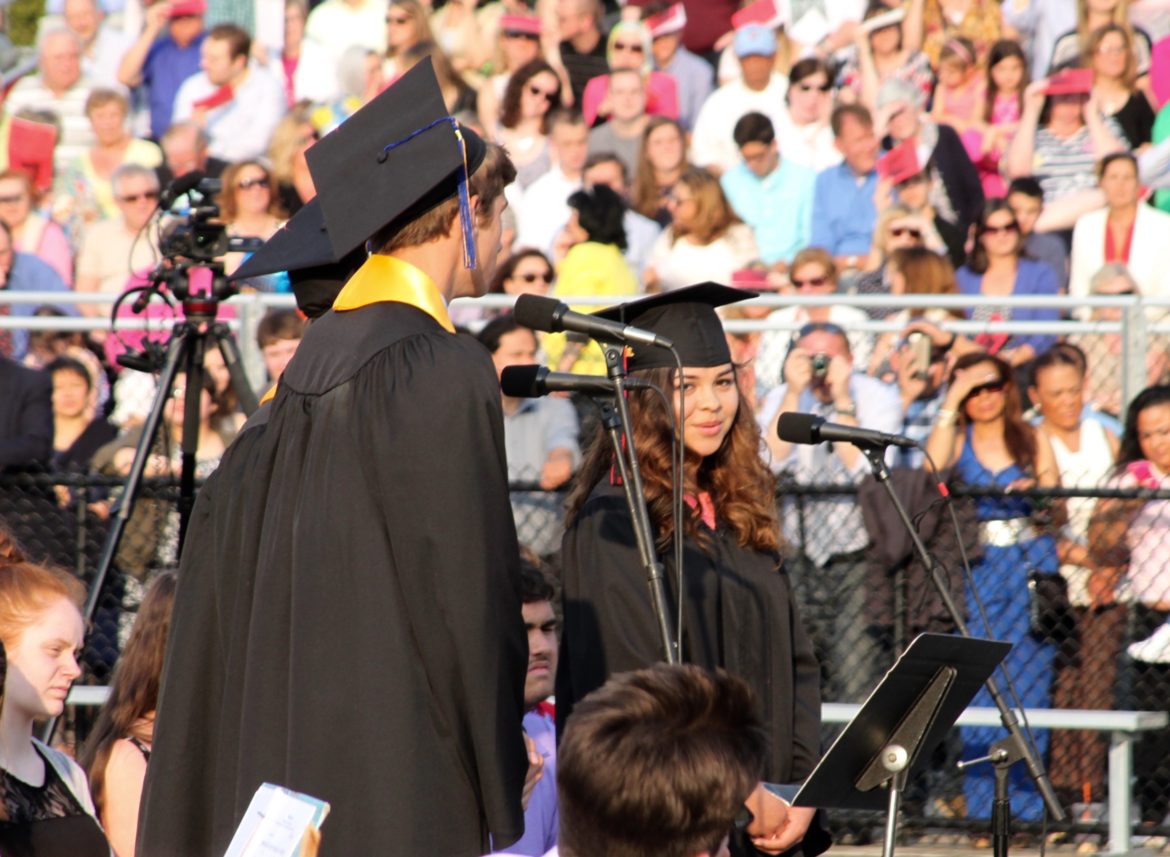 The seniors not only celebrated the end of their high school career, but also thanked teachers and staff from the high school, and from the elementary schools and middle school which they attended before WHS.

The packed stands at Victory Field enjoyed several musical performances by members of the Class of 2016, and heard the thoughts of three seniors. 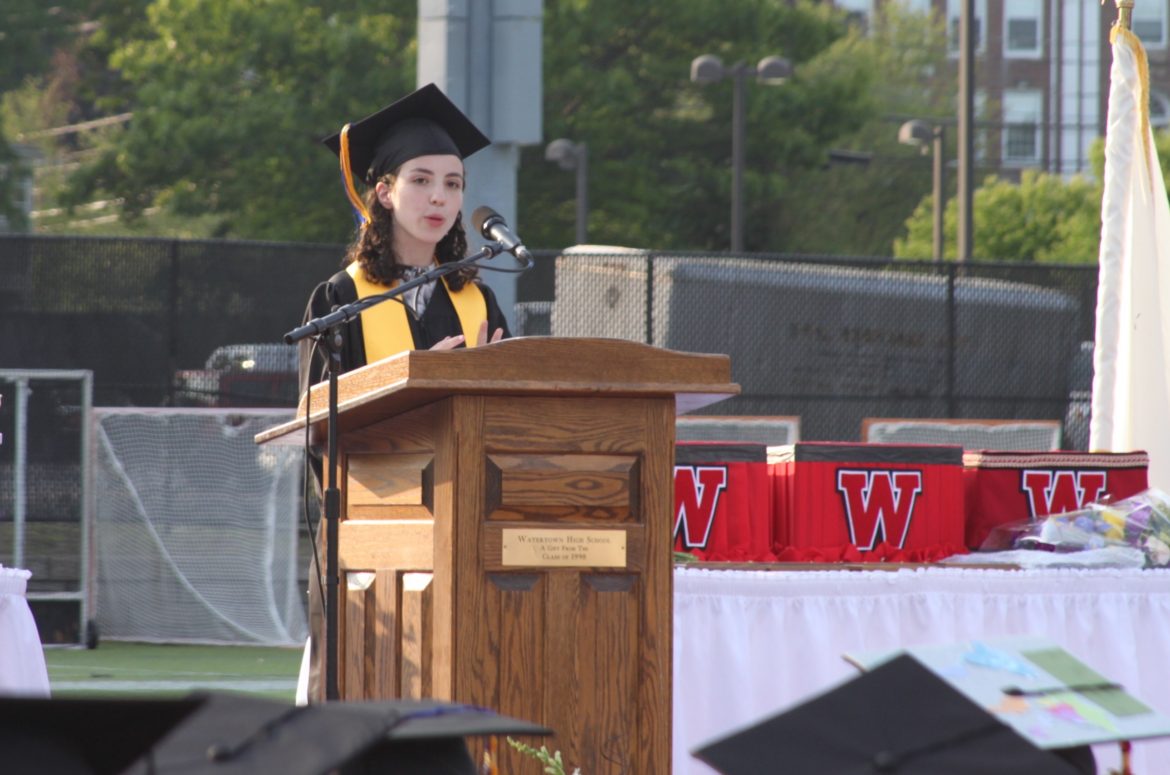 Valedictorian Zoe Grodsky recommended that her classmates follow the three-to-one rule, where they think of three positive things for every negative one. Otherwise it is easy to get overwhelmed by the negative.

She said there were plenty of times she had negative thoughts at WHS, including when she was square dancing in a hot gym along with a class of bewildered teens. Grodsky said she will also remember the good things, such as the history teacher always willing to give extra help, Larry the custodian who had a smile and kind words after theater practice and the integrated special ed class that combines mainstream and special needs students. 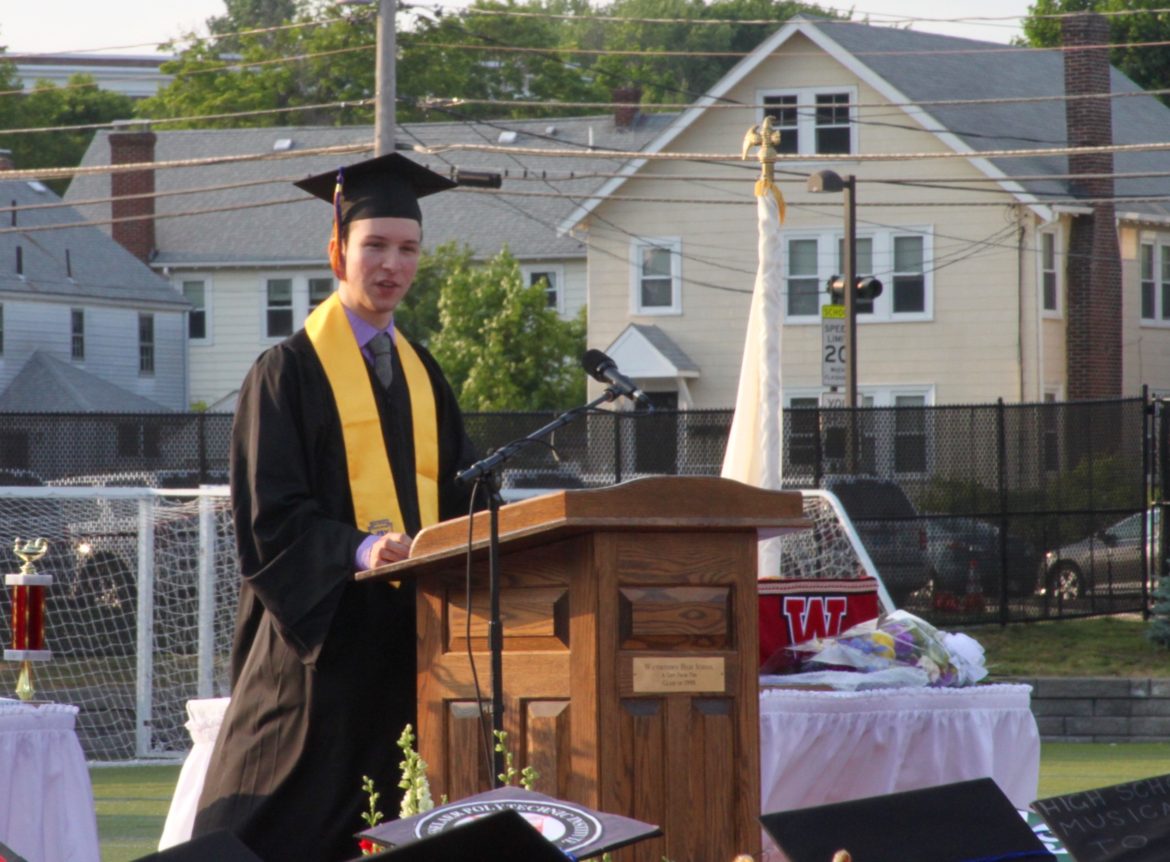 Salutatorian Chris Rohlicek wondered why he “suddenly became a slacker” and waited until the day after prom to write his speech.

The speed that high school went by, however, amazed Rohlicek. Senior year ramped up with exams, papers and projects, “then suddenly it was all over. Life doesn’t slow down for you to appreciate it. The only way you can do that is to live life as if it every one is an unforgettable moment.” 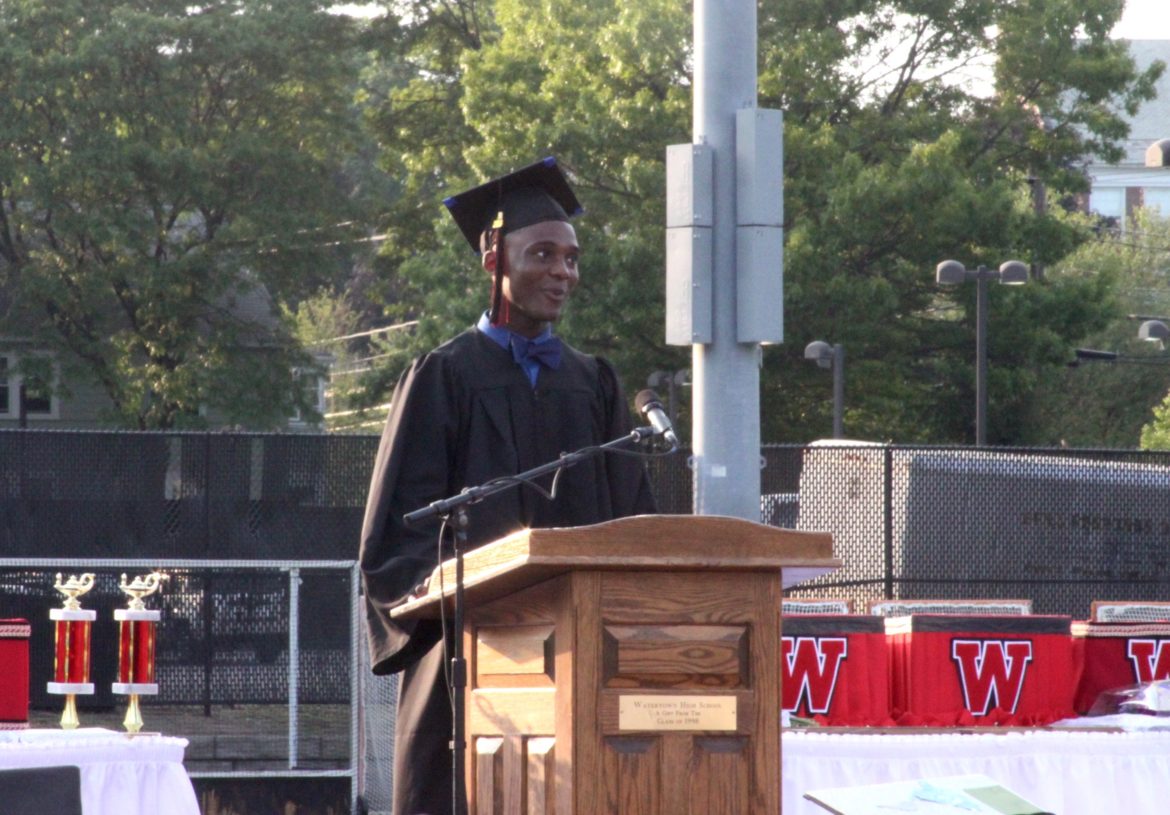 Class President Farid Mawanda said the class has really been together since they came together in fifth grade at Watertown Middle School. He remembered all the times they had together, including the trip to Washington, D.C., coming to high school as freshmen, sophomore year “when we really got the hang of it,” hitting the books junior year and now senior year, when everyone stressed about what their future.

The graduates will go out into the world and represent not just themselves, Mawanda said, but also their parents, teachers, coaches and their community.

“From this day on you are the one making the decisions … OK, maybe your parents will make some decisions,” Mawanda said. “One love, Class of 2016!”

See the names of all the graduates by clicking here. 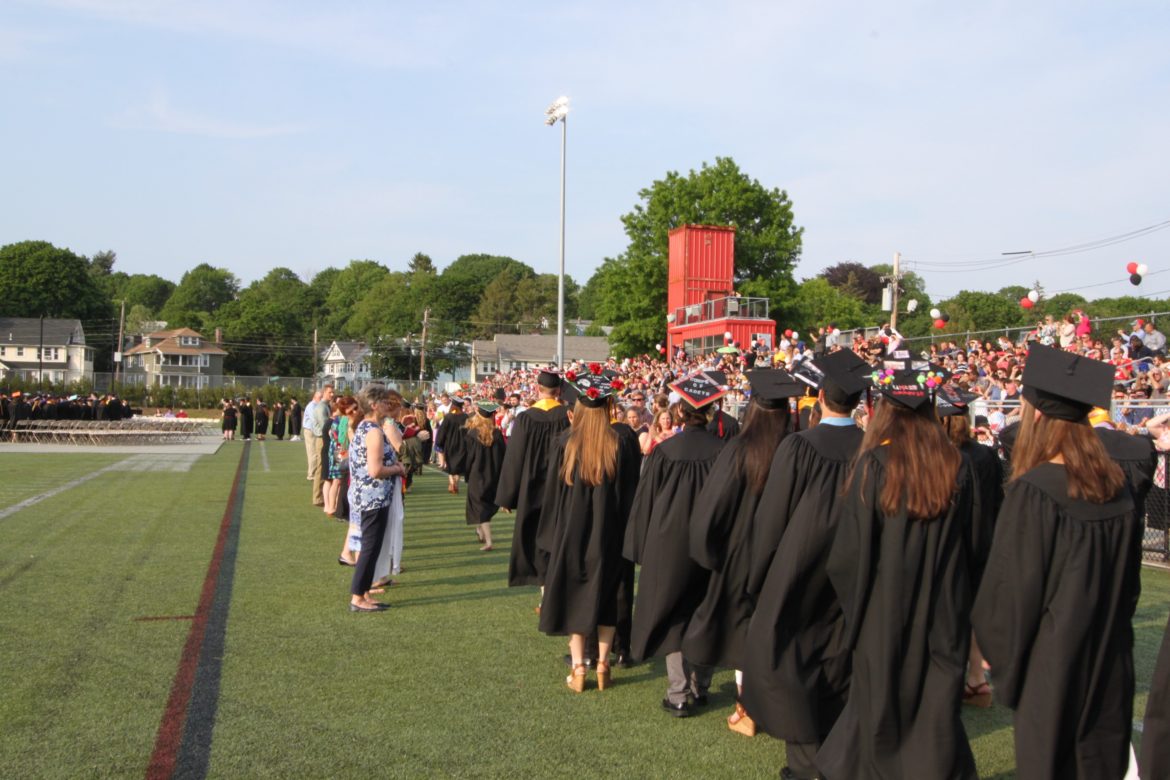 The procession of the Class of 2016 into their graduation ceremony at Victory Field Friday.