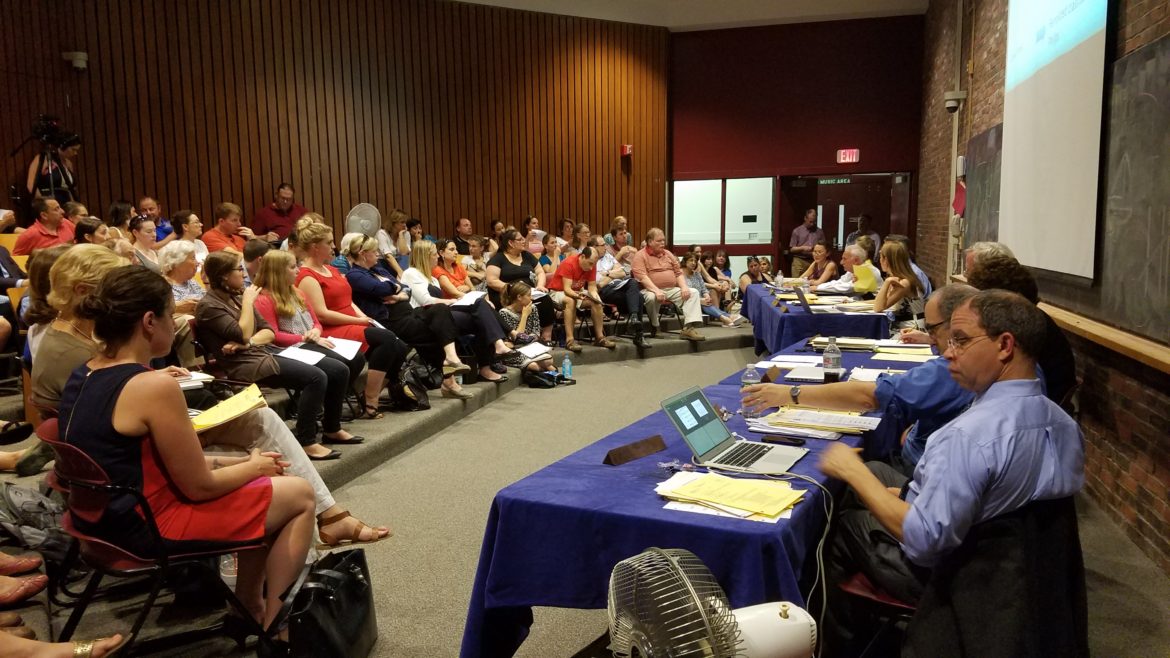 After hearing the concerns of parents about a proposal to move preschool, Pre-K and even kindergarten classes around the district, Watertown School officials presented a second plan, which got better – but still mixed – reviews at a packed meeting at Watertown High School Monday night.

The new plan calls for moving one Early Steps Integrated Preschool class from Hosmer Elementary School to the Phillips Building (an old school on Common Street) which along with another Early Steps class already slated to be at the Phillips. In addition, one PreK class each from Cunniff, Lowell and Hosmer elementary schools would move to the Phillips, too, Superintendent Jean Fitzgerald said.

At a pair of meetings held last week, parents complained about the amount of driving around town, if they had children at multiple schools, and having students start school at one campus before moving back to their neighborhood school.

Fitzgerald said she and her staff heard the parents concerns and used those to come up with the new proposal.

“This is still just a proposal,” Fitzgerald said. “There is no perfect solution. This is a way to deal with it in the short term.”

Fitzgerald said she would meet with parents and others to talk about the plan for moving the Pre-K classes to the Phillips Building on Wednesday, June 8 at 8:15 a.m. at the Hosmer School Library, 1 Concord Road, Watertown.

The new proposal would give some space at the elementary schools, but Mena Ciarlone, principal of Cunniff said she would still have art and music traveling around the school on carts.

Cunniff will likely combine some second and third graders into one joint class of about 21 students. Hosmer Principal Bob LaRoche said moving the Early Steps and Pre-K would free up a classroom freed – though it would be a different room – to create a new fourth grade class. At Lowell School, Principal Elizabeth Kaplan said she has large first and third grades next year and one would be the focus of reducing the class size.

Many parents said they like the new proposal, especially those who had been faced with their children going to the Hosmer for Pre-K or kindergarten instead of their local school – either the Cunniff or the Lowell.

One Cunniff parent, Jim Cairns, said he prefers the first model because it would give Cunniff another classroom, and therefore art and music teachers would not have to travel around the school. He proposed having buses from Cunniff to get students to and from Hosmer, so parents would not have to drive across town each morning, and in some cases make two drop offs and pick ups.

Another Cunniff parent said he was glad to see the new plan because his child could settle into his new school, and not have to attend kindergarten at Hosmer before coming back to Cunniff.

A few parents told Fitzgerald that they just need to know what the decision is because the have deadlines to decide whether or not to send their child to preschool programs outside the district.

The parents and children of Watertown are not the only ones impacted by the decision. The Phillips Building sits right next to the Watertown Senior Center, but Burt Greenberg, a member of the Council on Aging, said that the supporters of the Senior Center feel left out of the planning.

“(School Committee members) John Portz and Kendra Smith said they will improve communication (with the Senior Center),” Greenberg said. “I’d like to point out that there were none. … Whatever you do, you must consider us.”

A few parents said they think the Watertown Public Schools need to do a better job informing parents about what is going on.

“You need to do a much better job communicating,” said parent Diego Hammerschlag. “You must establish dialogue, build trust and seek feedback and ideas.”

Parent David Stokes suggested school officials create a space where people can “not only ask questions but make comments.”

The School Committee will meet Monday, June 13 at 7 p.m. in Town Hall. At that meeting they are expected to vote on and adopt a plan for next fall. Also at that meeting, DecisionInsite will present its enrollment projections for September (the presentation was delayed from this week’s meeting because of some errors in the calculations).

At the same time, the district has started a long-range planning group (which will include parents, teachers, staff and school and town officials) to look at longterm fixes to Watertown’s space problems. School officials also hired a firm, SMMA of Cambridge, to create a facilities master plan.

Town Council President Mark Sideris, who is also a School Committee member, said he worries that the schools may be “putting the cart before the horse.”

“We are conducting a master plan for the schools. But we could spend a significant amount of tax dollars on the Phillips School without the benefit of the study, which may say something different,” Sideris said.

(CORRECTION: A previous version of this story incorrectly stated that Lowell would have a co-taught class with students from two grades).