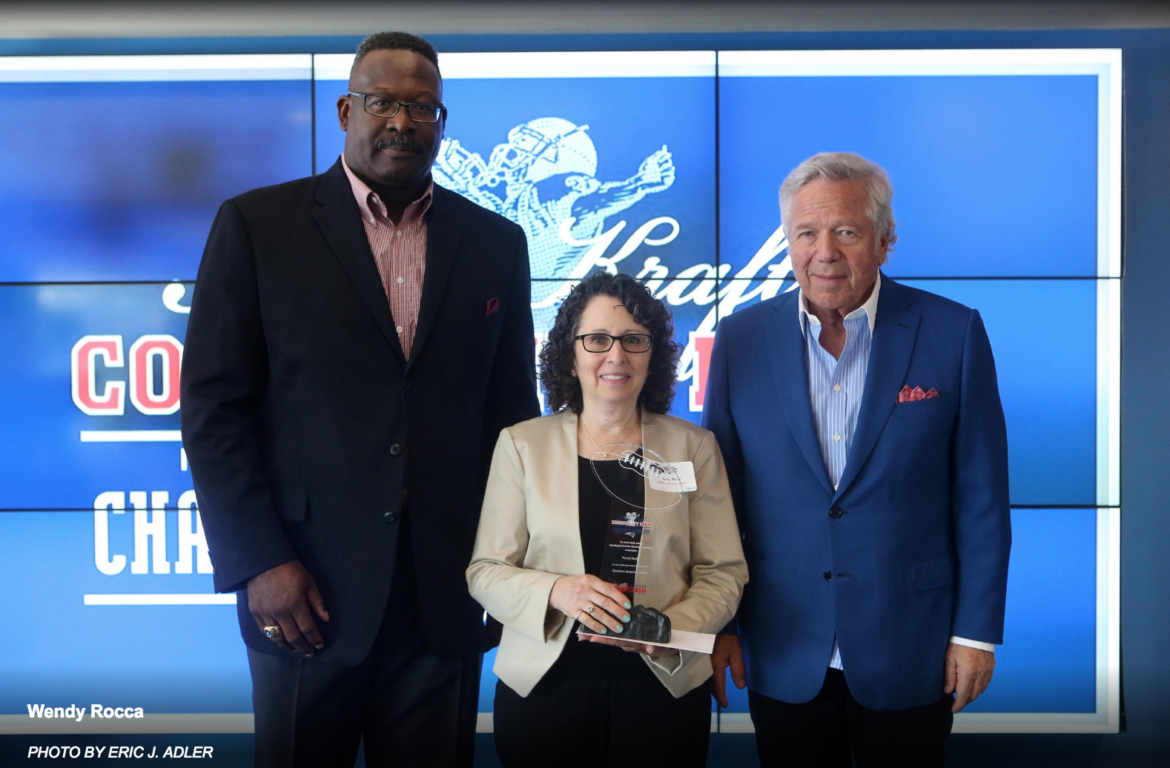 Operation American Soldier received an award from the New England Patriots Charitable Foundation for its work sending care packages to American servicemen and women across the globe from its base at the Marine Corps League’s Charles J. Shutt Detachment in Watertown.

Founder Wendy Rocca was one of 26 recipients of the Myra Kraft Community MVP Award at a luncheon held on June 2 at Gillette Stadium. Among those on hand were Patriots Owner Bob Kraft, QB Tom Brady and tight end Rob Gonkowski.

“It was a wonderful, memorable experience!” Rocca said. “The other 25 recipients were amazing people, there were so many wonderful charities served by the people in attendance.”

Operation American Soldier started in 2003 when Rocca’s daughter Tracy was serving her country in Iraq. Rocca would often send Tracy care packages and after hearing that some of the other soldiers weren’t receiving any support from home Rocca began sending packages to other soldiers.

“Founding Operation American Soldier was not an intentional move,” said Rocca. “When we heard that some were not receiving any support from home, we had to change that. The thought of our troops not knowing how much we appreciate them keeps us going. It’s something that is necessary and so important to them. And quite truthfully, it’s part of who we are.”

Operation American Soldier collects items such as snacks, toiletries, and reading material to send to troops. Volunteers package the items and include a note to the recipient. The main cost is postage, which is paid through donations.

The group has sent more than 15,000 packages, Rocca said.

Each year, the Kraft family and the New England Patriots Charitable Foundation host the awards program as part of the ongoing Celebrate Volunteerism initiative in honor of Myra Kraft’s example of being a lifelong volunteer, according to an announcement from the Patriots.

“There were a record 450 applicants,” Rocca said. “We are humbled and honored.”

This year, 15 New England-based organizations – including Operation American Soldier – were presented with $5,000 grants in honor of their volunteers’ work. Ten others received grants of $10,000 and one grand prize winner was presented $25,000, according to the Patriots.

“This event will always be one of my favorite community programs that we do,” said Patriots Chairman and CEO Robert Kraft. “The story of each recipient and the cause they are supporting is so unique and inspiring. I know that, just like Myra, none of these winners were looking for any recognition but we are happy to shine some light on the great work they are doing in their communities.

“We are thrilled to offer our support to each of these 26 nonprofits in honor of their outstanding volunteers.”

Find out more about Operation American Soldier at www.OperationAmericanSoldier.com.