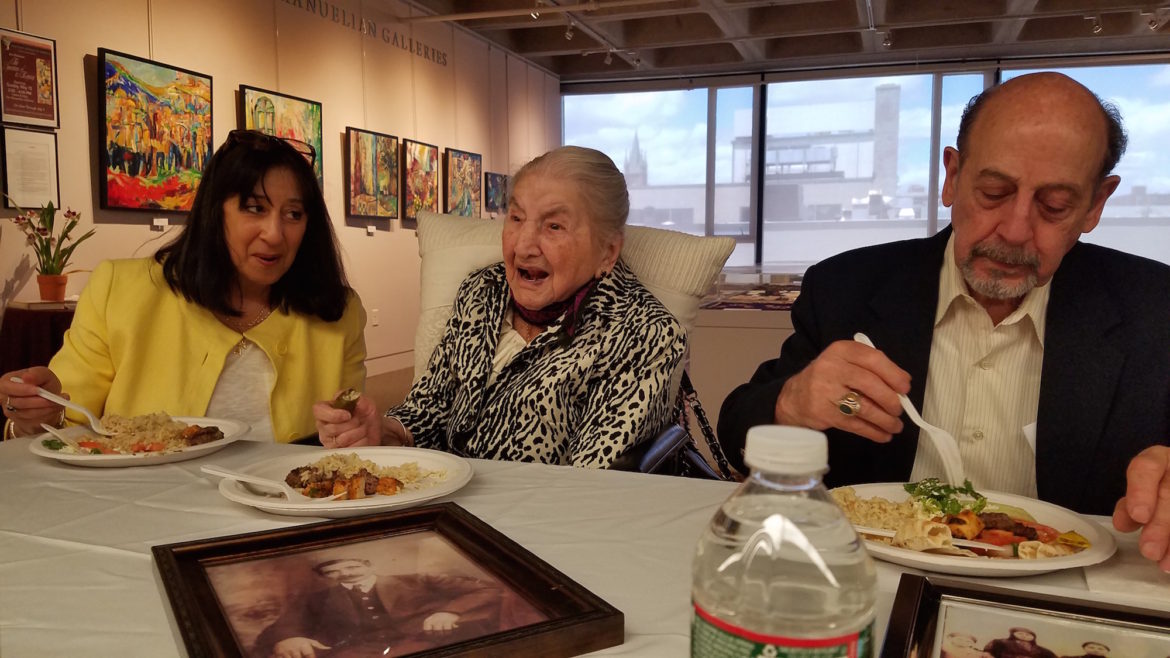 106-year-old Armenian Genocide survivor Asdghig Alemian enjoys lunch before sharing her story with educators at the Armenian Museum of America in Watertown. She is sitting with her daughter Claire and Alan.

Seeing the cheerful personality and smile on the face of Asdghig Alemian’s face, you would never know the horrors and harsh conditions she lived through as a young girl.

At the age of just five, Alemian watched family members die, was separated from her mother and made a harrowing journey just to be taken in by an abusive Turkish family.

Now, at age 106, the Weymouth resident is one of the “last surviving survivors of the Armenian Genocide,” said Roxanne Makasdjian, a member of GenEd Board of Directors and UC Berkeley Manager of Broadcast Communications who interviewed Alemian at the Armenian Museum of America in Watertown.

The interview was part of a day-long program by The Genocide Education Project, called “Understanding the Armenian Genocide through Primary Sources,” to teach educators about the Armenian Genocide and was attended by teachers from the Watertown Public Schools, St. Stephen’s Armenian School, and other schools in the Boston area.

The stories of survivors vary greatly, Makasdjian said, but those that made it out have similar characteristics.

“Those that made it out had some combination of  connections, luck and ingenuity,” Makasdjian said. “The vast majority of Armenians around today descended from those lucky, clever ones.”

Alemian, whose maiden name is Tetezian, grew up in Keghi, an area with many Armenians in what is now Turkey. She remembers happy times, such as going on picnics with her family – her father, mother, two brother and a sister.

In 1915, however, things changed. One day all the men of the village were told to meet so they could get food rations.

“It was a ploy. They were all killed and the women and children were put on a march,” said. Makasdjian said. “All roads of the death march, if you made it, ended in the Syrian desert.”

Alemian’s mother literally tried to hide the horrors of the march from her young daughter.

“Her mother told her to keep hiding behind my skirt so she didn’t see what was happening,” Makasdjian was told by Alemian. “But her two brothers died along the way. She remembers her mother carrying one of her brothers, who had died, looking for a place to bury him.”

Right after she was able to put one of her sons to rest, the other one died. Alemian’s mother knew she had to do something to save Alemian and her sister Anna, who was two years older.

She found a police officer who the family suspects she knew or figured out was Armenian, and begged him to take them to safety and promise not to give them to anyone who is not a relative.

The girls were snuck out in a sack full of plums and put on the back of a mule. They made it to Mardin, where they were taken in by a Turkish family. Life there was not great, however.

“They took my beautiful dress,” said Alemian, adding that her mother had made the dress. “I thought they were going to wash it, but she folded it neatly, saving it for her her (unborn) daughter.”

What she wore instead, was very meager.

“They put a pillow case over my head and cut a hole for my head and two holes for my arms,” Alemian said. “And pardon my language, but they gave me no panties.”

Speaking Armenian was not just discouraged, it was punished by a slap.

She also recalls her name being changed. Asdghig means “star” in Armenian, but they called her the word for “brilliant” in Turkish.

Eventually she was moved to another family, who live in Aleppo, in what is now Syria. That meant, however, being separated from her sister.

Eventually, she felt more part of that family, and when they had a child she helped care for it.

One day, several years later, a woman knocked on the door saying she was looking for work, but Alemian suspects she was really searching Aleppo for Armenians.

“The woman asked, ‘Are you Armenian?'” Alemian said, who at first said, no. “She said, you are afraid to say you are Armenian. I am Armenian.”

The woman asked Alemian’s last name, but she could not remember. She did remember her father’s name. The woman went to an orphanage where young Armenians lived after being saved, and asked the children if they knew this young girl, and one said “That’s my cousin!”

She was reunited with her sister Anna, who had escaped after a man had visited the family in Mardin looking for his daughter. She told the family he was her father, and escaped and made her way to Aleppo.

Her uncle Garabed had made it out before the genocide, heading to the United States in 1908 and settling in Weymouth. In 1922, he somehow figured out that Alemian and her sister were in the orphanage in Aleppo, said Alemian’s son Alan.

“Either he heard that they were there or he had been contacting orphanages looking for them,” Alan said. “He sent for them. My mom came over on Oct. 4, 1922 and her sister a month later.”

The memories of the genocide are still with her, Alemian said, but so are her good memories.

“At night, that is what I think about. My children say, Mom, don’t think back,” Alemian said. “When I can’t sleep, that’s what I’m thinking about. I go back – the good, happy times, the sad times. I have to live like that when I close my eyes.”