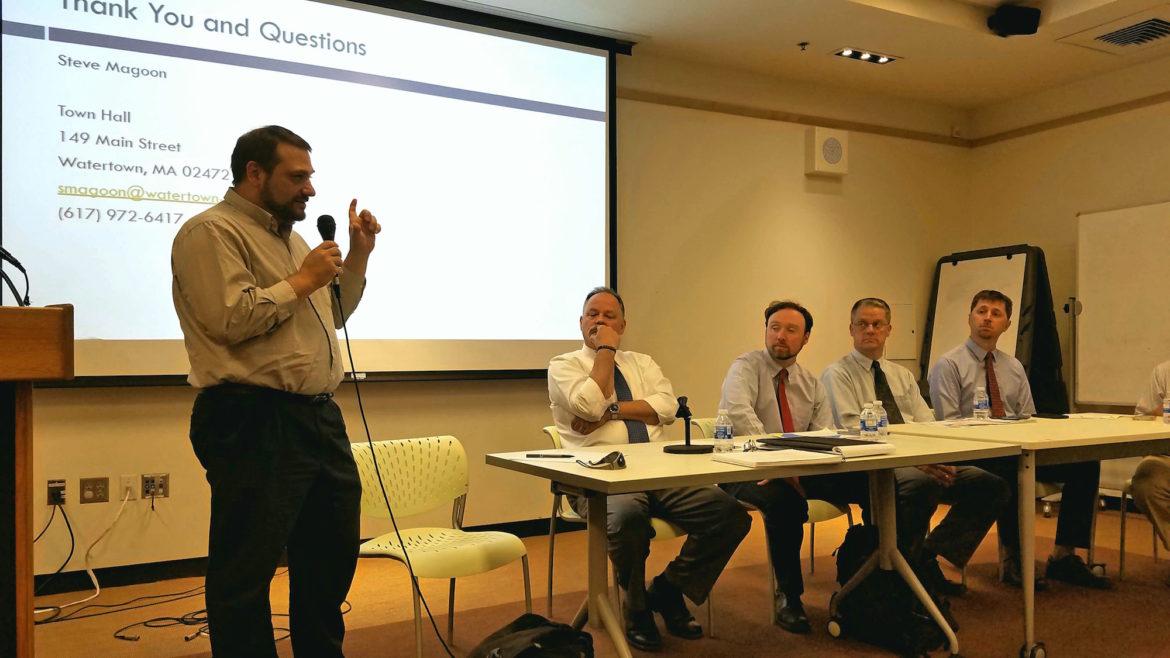 Local efforts to improve transportation when Watertown officials have little influence on the MBTA can be tough, but they looked at what some neighbors are doing for inspiration.

Transportation directors from Newton and Waltham, as well as a consultant who works on transportation plans, came to a forum on June 16, organized by the Watertown Pubic Transportation Task Force, the Town Council an the Department of Community Development and Planning.

Both Waltham and Newton have completed extensive transportation planning efforts and are close to making recommendations a reality.

“Plan for things you want, not the things you are afraid of,” DiNisco said.

He said it is key to think about all users of the streets: motorists, bicyclists, public transport riders and pedestrians.

He added that parking is what tends to drive everything else, partially because it is one of the things the town tends to have control over.

When designing a project or intersection, many things should be considered, from where the driveway will go, where bus stops and crosswalks fit best and more, he added.

Both Newton and Waltham have big changes planned for parking in their major commercial areas.

Newton will let price determine where people park and for how long, said James Freas, chief planner for Newton. In Newton Centre, there will be three parking zones: one in the center of the area where it costs $1 an hour, another area a little farther out that costs 75 cents an hour, and finally a free area.

“The goal is to have 10-15 percent of the spots available all of the time,” Freas said.

The zones will be adjusted every so often to fine tune the plan, Freas said.

Other strategies were used in specific cases. One street in Newton Centre, Union Street, was always 90 percent full, and the city got complaints from merchants. When they looked into it many people parking on that stretch were employees. The city worked out a plan to give workers permits to park a few blocks away.

Newton also did studies of how people commute to work from their homes in Newton, and to work at businesses in the city.

Both Newton and Waltham will soon have parking apps where people can pay for parking using their cellphones.

The plans take time to form, and roll out. Waltham hired a transportation consultant 1.5 years ago, and Newton first started thinking about transportation two years ago. Implementing the recommendations have just started in both communities.

For Waltham’s transportation plan, officials looked at 91 intersections in town, reviewed traffic counts, accident statistics and how many people get on and off transportation at those spots.

The plan calls for major changes to more than a dozen intersections, including some very close to Watertown: Main Street at Gore Street/Barbara Road, Grove Street at Gore Street/Seyon Street and Trapelo Road at Waverley Oaks Road. Garvin said people can submit feedback on the ideas until June 30 by clicking here.

Helping people visualize changes to area is an important part of the process. Garvin said Waltham held meetings where they put up large drawings of each of the recommendations, so people could look at the up close.

In Newton, city officials tried to show people what changes could look like in real life, Freas said.

“We had a demonstration project at Walnut and Washington streets (in Newtonville) where we put in bump outs and better defined bike lanes, transit stops and crosswalks,” Freas said. “We estimate we talked to 1,000 people and the response was overwhelmingly positive.”

People said the bump outs, which were marked out with bales of hay, made crossing the major street feel safer because they could see the traffic more easily ad did not have as far to cross. A dedicated bike lane on the bridge over the Mass Pike on Walnut Street made cyclists feel more confident going over the short but steep bridge where visibility is tough, Freas said.

Sometimes, people will not be able to visualize, or will not be in favor of a plan, no matter what officials say. Garvin pointed to taking the section of Lexington Street north of Totten Pond Road heading northbound and shrinking it from two lanes to one lane. Garvin said the road can handle the traffic load with one lane and it will calm the traffic.

Watertown officials may face that sort of criticism in upcoming plans to remodel Mt. Auburn Street. Steve Magoon, director of Community Development and Planning, said the road will be reduced to one lane each way for most of its length, with turning lanes added or kept to allow traffic to go through intersections.

Residents also wanted to know about the shuttle that is planned as part of Watertown’s Transportation Management Association. Magoon said it will primarily run in the morning and evening commute times to take people to and from large businesses in town. He expects it to serve Arsenal Street, which is underserved by the T, and Pleasant Street, which for part has no T service. He did not expect to have the shuttle do many if any north-south travel through Watertown.

An upcoming meeting of the Town Council’s Transportation subcommittee will focus on the shuttle, said Councilor Aaron Dushku. It will be held on Wednesday, June 22 at 7 p.m., in the first floor meeting room of Town Hall.