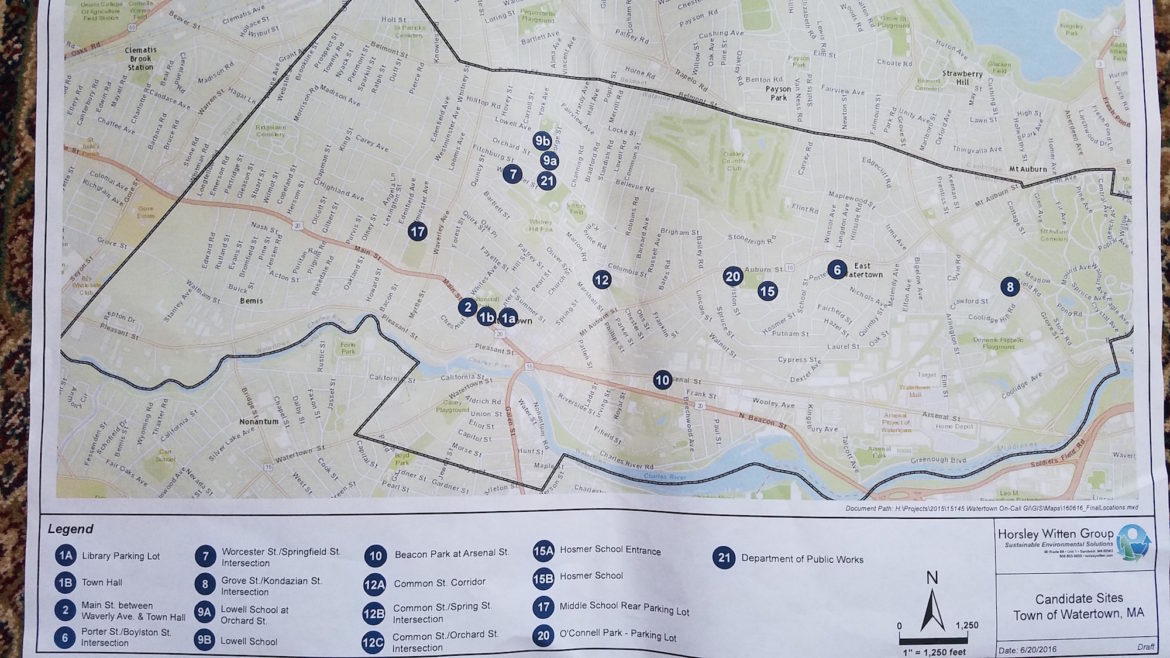 A map showing the proposed Green Infrastructure projects around Watertown.

A map showing the proposed Green Infrastructure projects around Watertown.

Spots around town are being considered to put “green infrastructure” projects that will reduce the amount of rain runoff going into the storm sewers and eventually into the Charles River.

Tuesday night, consultants working with the town presented more than 20 options for places on town-owned property where project such as rain gardens, tree trenches that collect stormwater or permeable pavement can be installed.

The efforts grew out of the town’s need to meet new, more stringent stormwater regulations from the federal government, which requires the town to reduce the amount of pollutants, such as nitrogen and phosphorus, going into the river.

The water going into storm drains does not get treated before going into the river.

Interested residents filled the Town Council chamber to hear more about the effort. Janet Bernardo, an engineer with Horsley Witten Group presented 21 projects. Some projects received more weight because they would handle water from a large catchment area, they are in an area with large amounts of stormwater, or are in an area slated to be part of an upcoming project.

Two projects will be chosen as pilots for green infrastructure, and another important factor is that the project be visible, said Richard Claytor, president of Horsley Witten.

“We need to make it visible so people can see it and try to get the ball rolling (on other projects),” Claytor said.

The proposed projects are located at town buildings, schools, parks and on streets around town.

Common Street has a three proposed projects, including turning the traffic island at Common and Spring streets into a bioretention area, where water will run down into and slowly percolate into the ground.

Several people got behind this idea.

“It is great to see Common Street on the list because it is undergoing a huge renovation project,” said Town Councilor Lisa Feltner. “Just about everyone at one point gets on Common.”

Bernardo had high hopes for a smaller bioretention area in the parking lot behind the Watertown Free Public Library, but the town may be redesigning the area to make the library, Town Hall, and other facilities into more of a campus, she said.

Lowell School has a few places where green infrastructure could be used, including something simple like putting rain barrels under gutter downspouts or more a more complex undertaking like a a bioretention area at the bottom corner of the playing fields (at the corner of Orchard and George Streets).

Other schools had potential projects. One was a bioswale in the rear parking lot at Watertown Middle School, where stormwater goes into a vegetated strip. Hosmer School has a spot near the main entrance where a bioretention area could go, and take in water from the surrounding driveway.

Councilor Tony Palomba said he would like to see a project at a school and hopes it could be used to teach students about stormwater and other subjects. It could have other benefits.

“It might open up more opportunities for grants,” Palomba said.

An area that seems perfect for a bioretention area is the spot where Beacon Park hits Arsenal Street. The entrance will be closed off, and developers of the apartments at 202-204 Arsenal St. have agreed to pay for work there. Bernardo said it could collect water from Beacon Park.

Another bioretention area could be placed in the parking lot at the Department of Public Works facility, too.

Some projects that did not rank well include projects at intersections around down, such as Porter Street/Boylston Street, Grove Street/Kondazian Street, and Worcester Street/Springfield Street. These area shad large intersections, but are either tricky to make work or would need major changes to the intersection, Bernardo said.