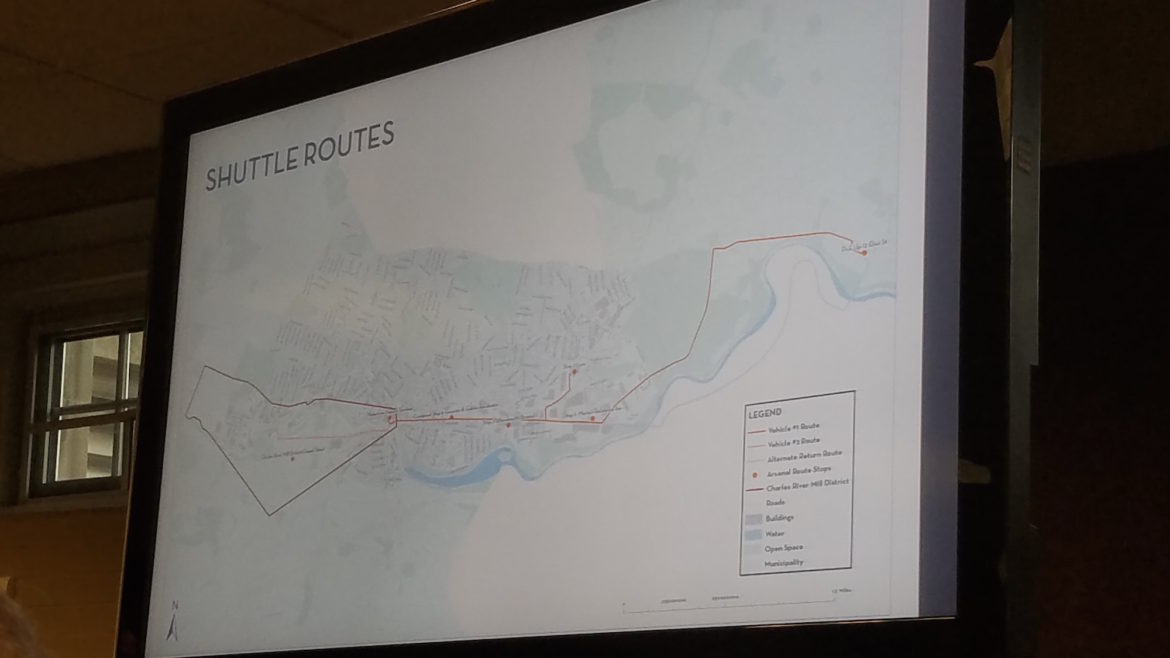 An image of the proposed shuttle routes in Watertown.

An image of the proposed shuttle routes in Watertown.

A shuttle that would enhance Watertown’s public transportation offerings has been proposed that would link businesses and residents on Arsenal and Pleasant Streets to Harvard Square, but other routes would not be part of the service, yet.

The proposal came from the 128 Business Council, which is working with the town to create a Transportation Management Association (TMA), of which the shuttle would be a piece.

Patrick Sullivan, of the 128 Business Council, told the Council’s Transportation subcommittee that he believes a shuttle could make six runs in the morning and six in the evening if it went from Harvard Square, cut down Coolidge Avenue and ran along Arsenal Street, and finally turned around in Watertown Square.

While the stops are at certain businesses and apartment complexes, it would be open to everyone. Employees of corporations would ride for free, and a fare would be charged to other riders, but how much is not known yet.

Sullivan’s plan called for stops at:

That route could be served by one shuttle bus, Sullivan said. The buses would run from 6-10 a.m. in the morning and 4-8 p.m. in the evening. He based the travel time on data from the cellphone app Waze, which collects travel time data from users.

If a second was added, it could express from Harvard Square to Watertown Square, and then make stops along Pleasant Street, ending at the Bell Watertown apartments on Waltham Street. Sullivan did not have exact data for this route, but said he thinks it could make 4 or 5 runs in the morning and afternoon.

The buses would be nicer than riding an MBTA bus and faster, said Monica Tibbits-Nutt, executive director of the 128 Business Council.

A route run by the 128 Business Council that serves Waltham cuts the number of stops from Alewife to Waltham Center from 59 to 9, she said. The buses also have wifi.

“This is high speed wifi so people can use their laptop and do work on the shuttle,” Tibbits-Nutt said.

The two proposed routes would serve the businesses and major residential developments along Arsenal and Pleasant streets, but Councilor Tony Palomba said he wanted to see something that would serve other residents in town.

“I am still feeling there is not enough in this proposal that benefits the residents of Watertown,” Palomba said. “There are people in the community do not need laptops on their lap. They just want to get from one place to another.”

The proposal is not just for a shuttle serving big companies, Tibbits-Nutt said.

“I don’t want you to think we are a corporate shuttle company serving millennials,” Tibbits-Nutt said. “We also want to serve people working in facilities, who are not working in these businesses, who want to find and easier way to get to the library and do it in a way that does not cost $10.”

Before more routes can be added, Tibbits-Nutt said, the key is to get a shuttle on the ground and build publicity and momentum.

The cost of the TMA and shuttle would be approximately $600,000 a year, with two shuttles. With buses holding 24 people, and doing six runs a morning, that works out to about $2,000 per commuter, said resident Mark Peterson.

Tibbits-Nutt said companies do not think that way.

In other shuttles, more and more companies signed on, which reduced the cost, and allowed it to expand. One of the most successful shuttles is in Lexington, where the group runs the Rev Bus. There, residents can ride for $1.

The town will also have to decide how the TMA will be managed. Sullivan presented two models: either where the it is a subsidiary of the 128 Business Council, or it is run independently.

The pros of a subsidiary, Sullivan said, is the executive director of the TMA would be a 128 Business Council employee and have access to all their expertise, however, that board’s authority could not supercede that of the 128 Business Council. An independent TMA would not have that problem, but would have to build its own staff and likely find office space.

The subcommittee, Palomba and Councilor Vincent Piccirilli (Aaron Dushku could not make the meeting) decided to recommend the subsidiary model.

The 128 Business Council will be back again to update the council on the progress of the shuttle and TMA.