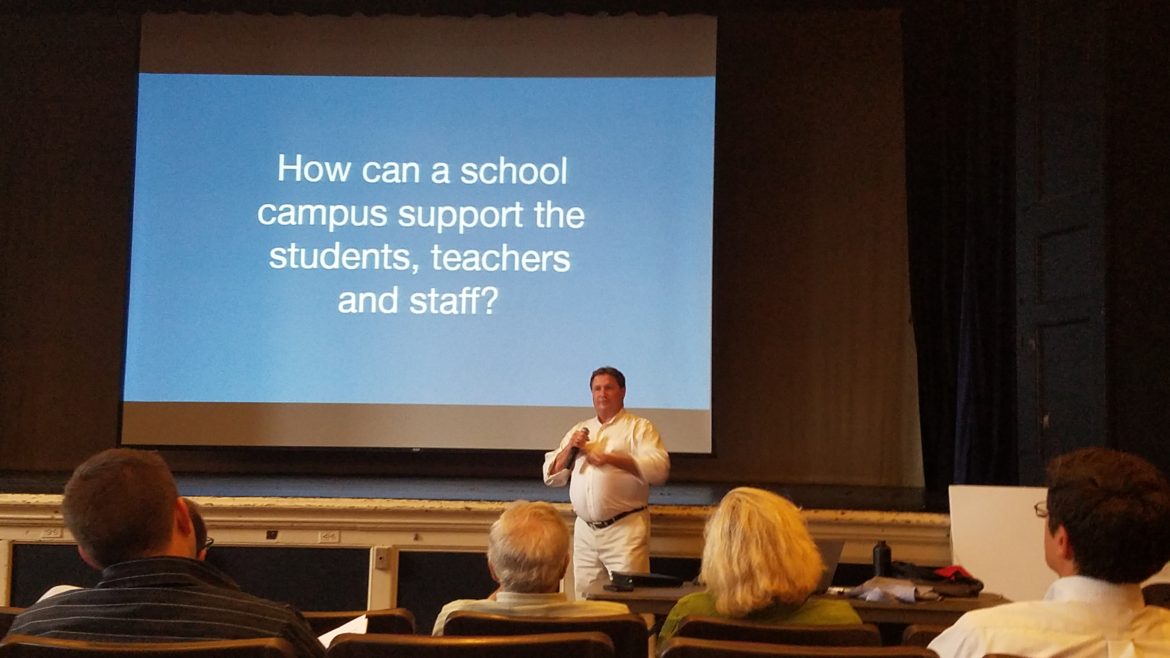 Michael van Hamel, a consultant working on Watertown's school master plan, talks about the needs of modern schools during a community forum.

Michael van Hamel, a consultant working on Watertown’s school master plan, talks about the needs of modern schools during a community forum.

This summer will be an important one for the future of the Watertown Public Schools, and a first step toward designing new schools for 21st century learning was taken Monday night.

Parents and community members gathered in the Watertown High School Auditorium for the first of three community forums being held as to help come up with the School Facilities Master Plan.

Those at the forum were asked to try to think about the schools of the future, and how they might be built using the current schools or in new ones. Also, organizers wanted to know what educational qualities people want to see in Watertown’s schools.

Michael van Hamel of  SMMA, the group doing the master plan for the district, showed some modern classrooms. They are designed to be more flexible, with more natural light and allow for more movement by students.

Some rooms have furniture that can be moved around and reconfigured so students can work in small groups. Some classrooms have walls that can be opened so classes can combined and subjects taught together.

“Take chemistry. You need math to do science, so you can open up the rooms and learn together,” van Hamel said.

Some schools are moving education out of the classroom and into the hallways, to the staircases and outside the building. Hallways can be places for small groups to work together, and van Hamel showed an example of a school that has two stairways coming down from a large open area which can be converted into a amphitheater-like area.

Project based learning is one focus of many modern schools, van Hamel said,

“Kids do a lot better when they have a project, have a goal and they make it,” van Hamel said.

Another push in education today is STEAM, which stands for Science, Technology, Engineering, Art and Mathematics.

“STEAM is not the subjects separately,” he said. “It is delivering all the components in a setting where they are all together.”

When thinking about building new schools, the town has to work within the guidelines of the Massachusetts School Building Authority, which approves school projects that receive state funding. They say rooms must be 850-950 square feet, for example, Some of Watertown’s rooms fit into that range, but many are either too small or in some cases too large.

The district does not have to build new schools, van Hamel said.

“You have double loaded halls – with classroom on either side of a hallway,” van Hamel said. “You can change these by taking out non-bearing walls and reconfigure the rooms.” 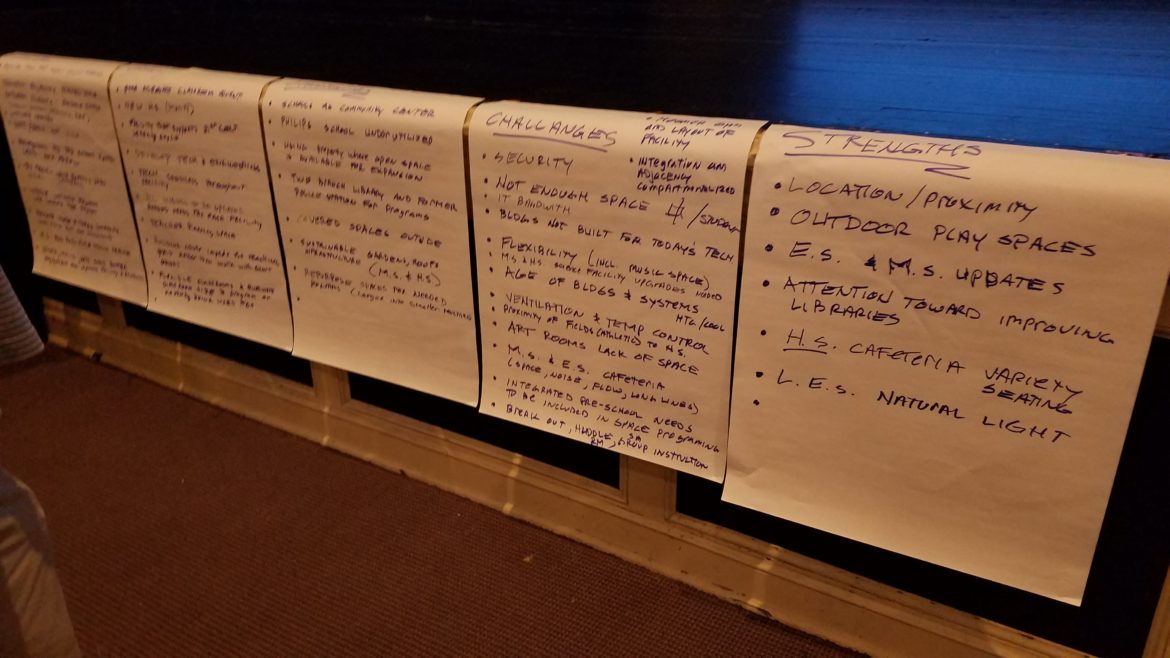 One focus group’s suggestions for the Watertown Public Schools. The consultant will use this input to draft a master plan.

The attendees then broke into groups and discussed what the strengths, challenges, opportunities and goals for the school’s facilities and Watertown’s education program.

People liked the fact that the schools are neighborhood schools, and that most campuses have good playgrounds. There were more challenges, including space, the age of the buildings, problems heating and cooling, and lack of specialty spaces.

Opportunities include reconfiguring rooms at the schools more flexible, create more maker spaces, make them more “green” and expand them.

Some of the educational possibilities include improving the reputation and results of Watertown schools, multi-subject teaching, including the arts and including some vocational programs.

The consultants will take the groups’ suggestions and use them to help the shape the master plan. There will be two more community forums, one on July 27 when consultants will talk more in depth about the design of the schools, and one on Aug. 24 when they will get more input from the public about the plan.