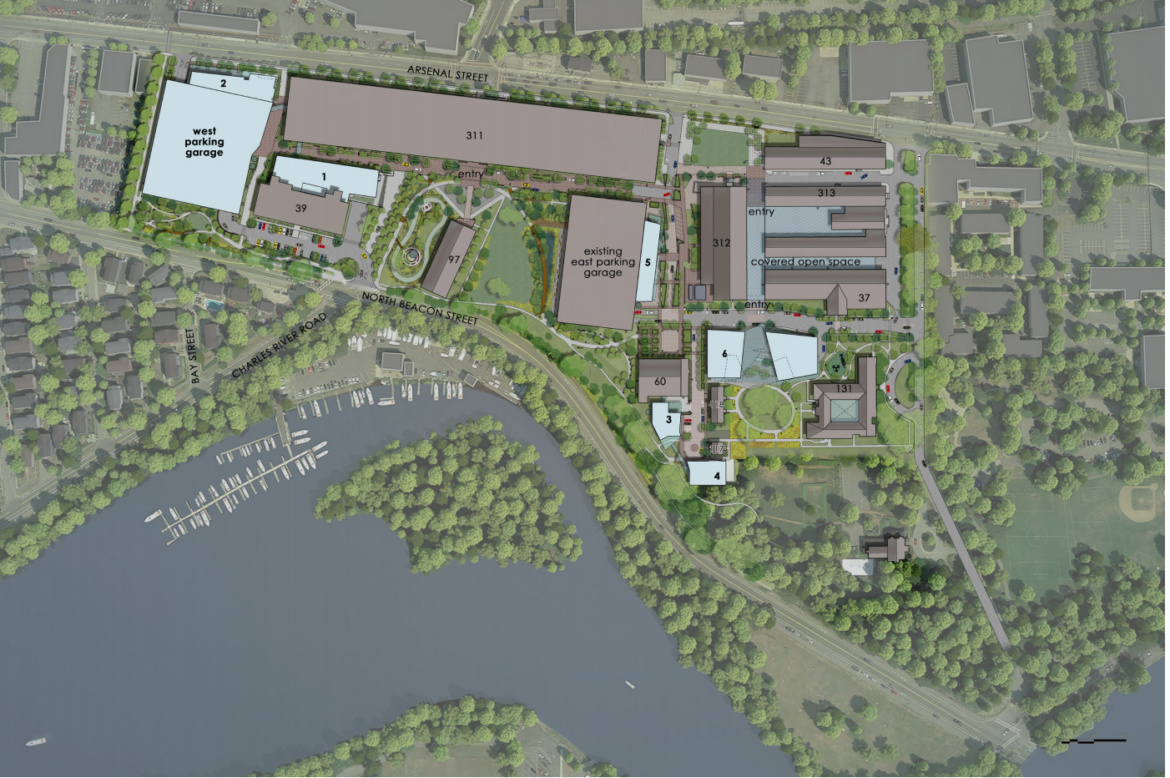 An overhead view of the Arsenal on the Charles complex with the proposed new building shown in white.

An overhead view of the Arsenal on the Charles complex with the new building in the approved master plan shown in white.

A plan put forward by the owners of the Arsenal on the Charles complex to add several buildings and increase the number of employees was approved by the Planning Board Monday night.

The board unanimously supported the plan, but before any building can be built, the owners – athenahealth – must come back for approval of that each of the plan. Additions include several office buildings, new retail space, a restaurant, more open space including a pocket park and a new glass roof over the spaces between the long “finger buildings” east of the Arsenal Center for the Arts building. (Read more about the plan here).

The company purchased the complex, between Arsenal and North Beacon streets, from Harvard University in 2013. Soon after planning started to renovate the complex to make expand the headquarters of the company.

In 2015 the town approved the Arsenal Overlay Development District, which allowed the creation of a master plan, rather than having to come to the town each time they wanted to do a building.

The Planning Board heard the final presentation over two meetings – last Wednesday and Monday night. The plan, however, had been hashed out during dozens of meetings with the public, and with town officials.

The plan largely got good reviews, even from some who had been critical at first.

“I would like to thank the (athena) group for coming up with hopefully what will be some snazzy architecture and some decent planning,” said resident Barbara Ruskin. “And I am grateful to the board for their openness to public input.”

Town Council President Mark Sideris said the plan is “significantly improved,” including the several story garage on the west side of campus. He noted that the company will also provide over $6 million in mitigation money to make improvements to things like traffic lights in the area.

“This is a large project, and I am proud to say athena wants to make Watertown their home,” Sideris said. “It is a little different from a developer wanting to put up 40 apartments and turning around and selling project. They are going to be a large employer and a lot of those people live in the community. These people will use our restaurants, our stores, our shops.”

“There is a lot parking being removed, and a lot of new buildings being proposed, but there is also 2.8 acres of usable open spaces where surface parking used to be,” Schreiber said.

The project will be built in several phases, the first of which will include the 1,623 vehicle garage. The mitigation money will come when the first phase is approved, said Jeffrey Dirk of Vannasse and Associates, the traffic planner for the project.

How quickly they are built depends on the speed of athenahealth’s expansion (they plan to add 1,000 employees to the current 3,500), and the economy, Bob Corning, senior principal with Stantec and a member of athena’s design team, said on Wednesday. 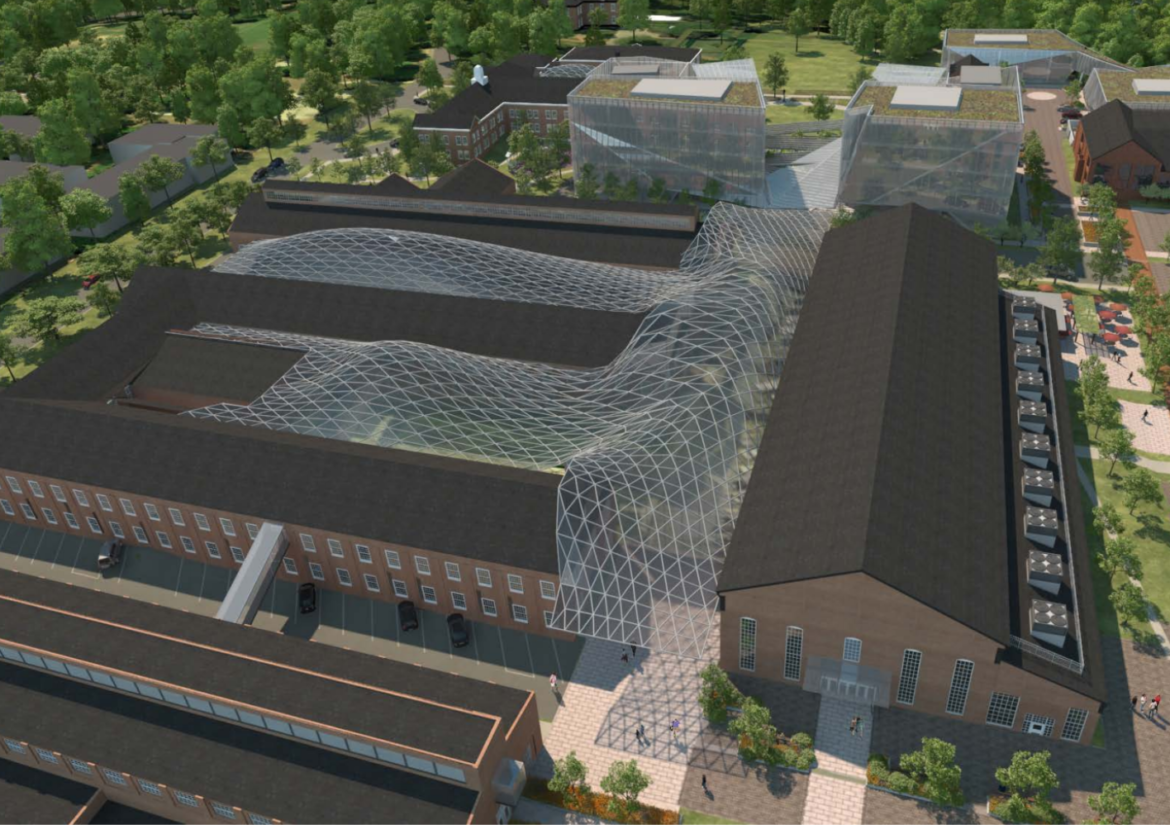 A glass-like roof will create covered open space on the east side of the Arsenal on the Charles campus, with a new office building in the background.

One of the biggest concerns with the project is the traffic created by the renovated site. Monday’s meeting focused on ways to improve traffic and cut down the number of people driving solo to work. See their plan here.

The area already has high traffic volume, with 18,5oo trips per day on Arsenal Street and 19,500 on North Beacon Street each day, according to Dirk. In the morning peak hour the campus has 1,289 trips and there are 1,552 in the evening peak hour.

The campus will have 25-30 percent more employees after the expansion, and traffic from the site would be expected to increase the same amount, Dirk said, but the company is committed to cutting the number of single-occupant vehicle trips (i.e. solo commuters).

They set a goal of reducing the SOV trips by 15 percent overall for the campus and by 20 percent for athenahealth employees, Dirk said.

They put together a Transportation Demand Management plan, which includes an number of incentives and new programs, including:

Town Councilor Lisa Feltner said she likes the measures proposed, especially the free MBTA passes, but suggested that there also be a cash incentive. She said that route has been successful in California.

The company will monitor the number of vehicles coming and going by installing sensors in the pavement of the four driveways, Dirk said. Also, athenahealth employees will be surveyed to find out how they get to work, and all employees will be required to participate.

After a baseline is established, athenahealth will have to report to the Watertown Planning Department annually to see if the are meeting their goals. If not, they will have to take measures, such as increasing the number of incentives, or contribute money toward other efforts to reduce SOVs and improve transportation in the area. 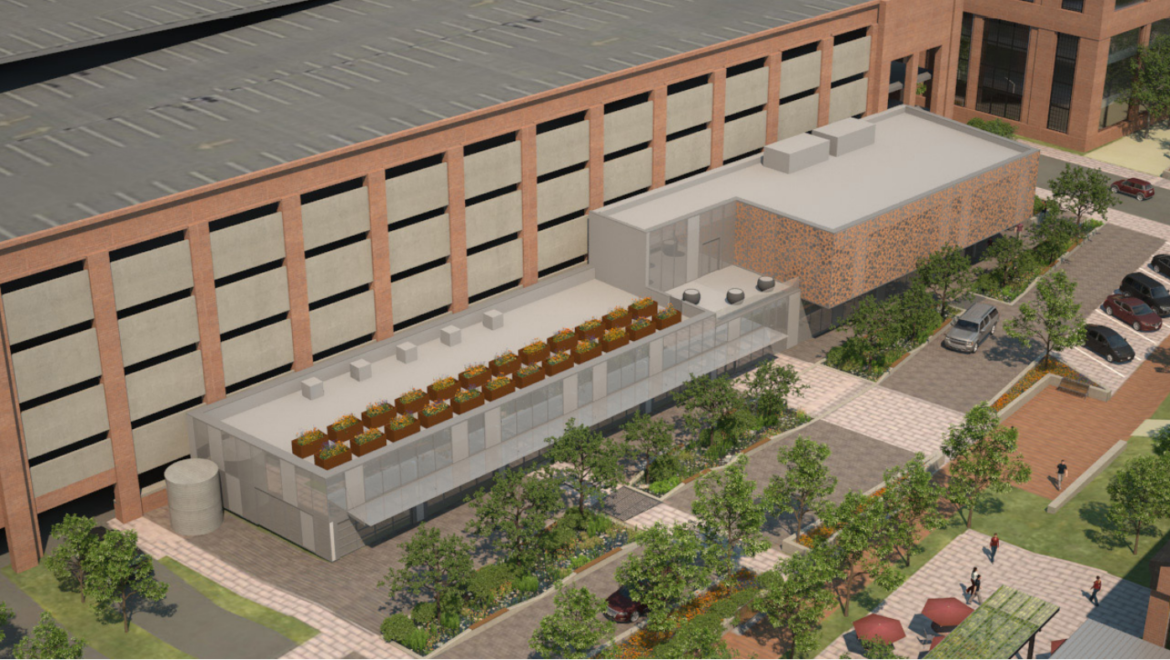 The new retail plaza planned for the Arsenal on the Charles includes a new building with retail and a restaurant that will go in front of east face the current garage.

The company will contribute financially toward improving streets in the area as part of the mitigation, Dirk said.

They will contribute $250,000, or about half the cost to redesign the traffic signals in Watertown Square. Also, athena will pay $2 million toward the reconstruction of Arsenal Street.

They will also participate in the effort to put in new traffic signals at Greenough Boulevard and Arsenal Street and Greenough and North Beacon Street. Both areas have high crash rates and can very congested.

On North Beacon Street they will pay to install a radar speed limit sign that shows drivers their speed as the go past the sign. The unit also collects data so police can time when to put officers out to enforce the speed limit.