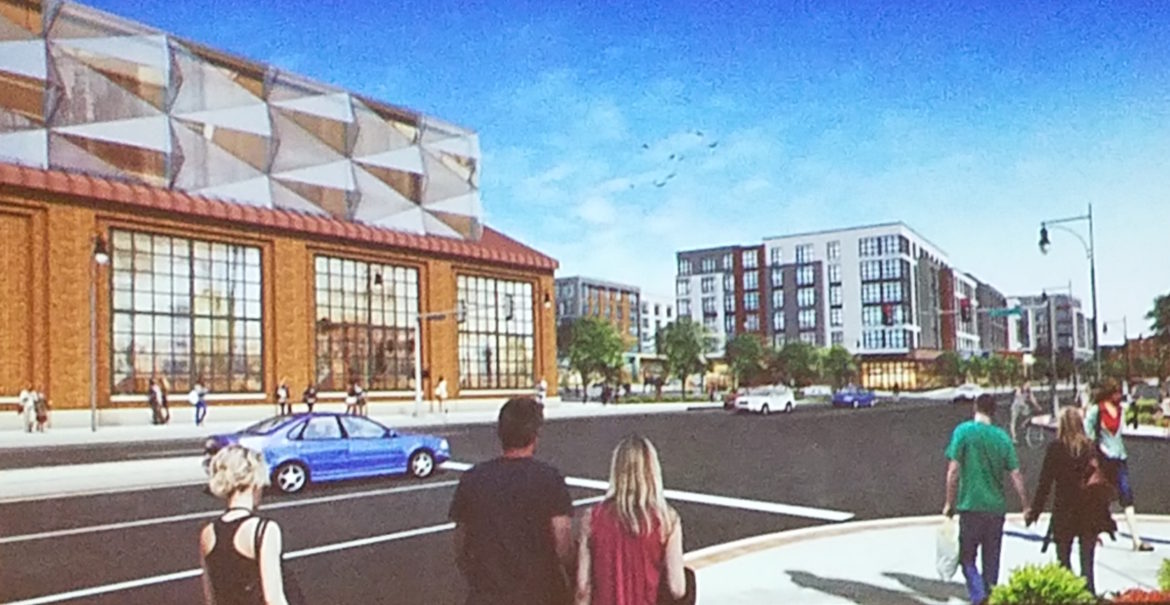 A view of the proposed new Arsenal Mall looking west down Arsenal Street. The building on the left now houses Old Navy but is proposed to have a movie theater. Further down the road are some of the new buildings that would have retail on the ground floor and housing on top.

Some significant changes to the roadways around the Arsenal Mall could be in store as part of the major renovation project.

The master plan for the Arsenal Project will soon be submitted to the town, and the architects and planners behind the project met with the public for the fifth time Wednesday night. Traffic and transportation was a major focus, along with some updated views of the mall.

The plan for the mall includes a movie theater, a grocery store, a bowling alley, more restaurants and a few hundred housing units. The new development would add more than 6,300 trips (a car going to and leaving counts as two trips) during a typical weekday, according to Giles Ham, traffic engineer with Vanasse & Associates.

“Movie theater, bowling alley, supermarket and residents – with all of those uses, yes there is traffic, but not at the same time,” Ham said.

The theater and bowling alley have the most traffic on Thursday, Friday and Saturday nights, while the heaviest use of the supermarket is Saturday at midday, Ham said.

The impact on Arsenal Street is expected to be an additional 5 second wait, at most, at intersections, Ham said.

The project has a Transportation Demand Management plan to reduce the number of solo drivers coming to and from the site by 15 percent, Ham said. They plan to offer residents MBTA bus passes, encourage employers to offer free MTBA passes, and will have a Hubway bicycle station and Zip Cars available on site. 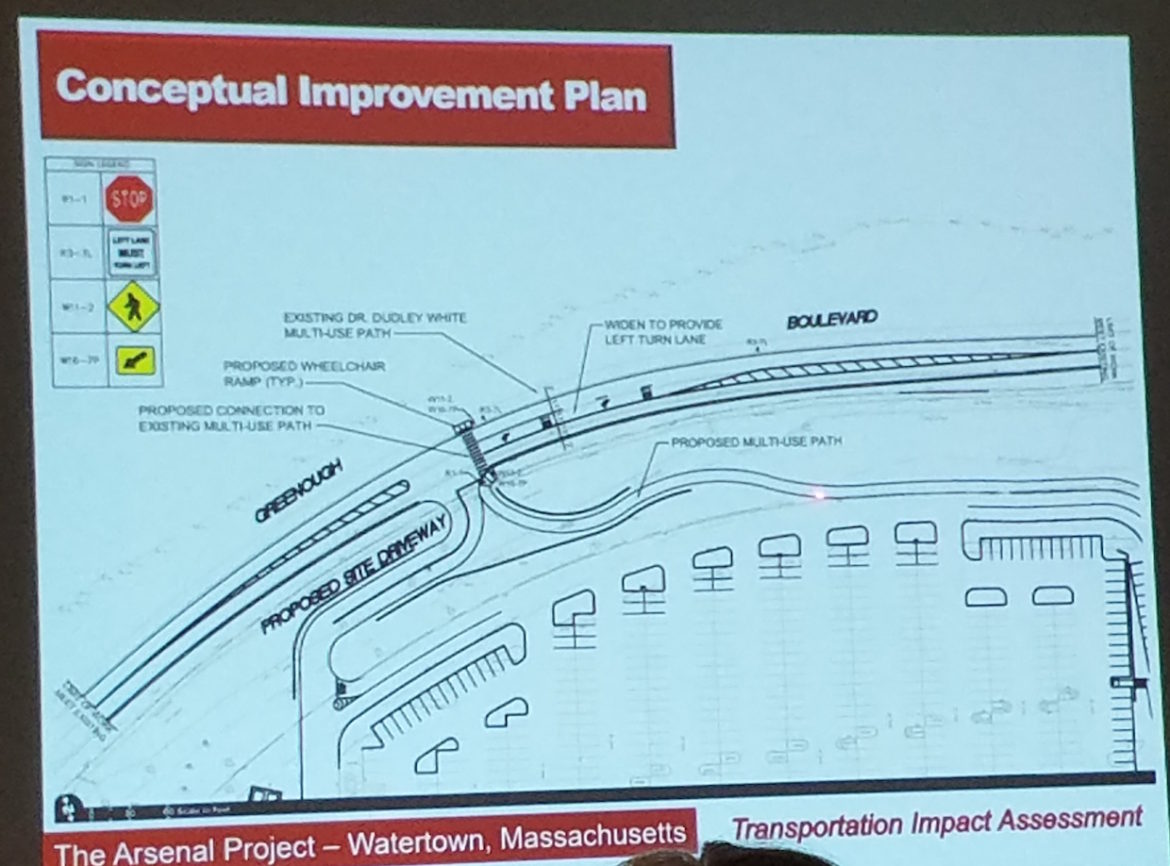 A drawing of a possible new driveway (on the left) on the back of the Arsenal Mall property leading out to Greenough Boulevard. It has been proposed by the Department of Conservation and Recreation. The area also has a proposed bicycle and pedestrian path coming from the right side and intersecting with the driveway.

Another way to reduce congestion on Arsenal Street is by increasing the number of access points, and improving intersections, said Jeff Heidelberg, project manager for the owner of the mall, Boylston Properties.

During the presentation, designers showed a couple of ideas floated by state officials.

One would be a new entrance to the mall from the back of the site, off Greenough Boulevard. There would be not only a driveway for motor vehicles, but a separate path for pedestrians and cyclists that would be handicap accessible. The intersection would not have a traffic signal.

The proposal to put the driveway and path, which would do and ‘S’ through the sloped area behind the Home Depot parking lot, displeased some at the meeting.

Maureen O’Sullivan said she worried that many trees and shrubs would be lost by installing the roadway and path.

“Where you are putting it I feel is a disruption from an are that is beautiful, a gem of the area,” O’Sullivan said.

A call was made by some other residents to wait and see if the entrance is needed. The developers said they will continue to look at that as an option in their master plan.

“We didn’t invent the idea. The DCR (Department of Conservation and Recreation) did,” said Boylston Properties Principal Bill McQuillan. “It came from people thinking outside the box. I think we have to think about how to lessen traffic on Arsenal Street.”

Another proposed change would be realigning Coolidge Avenue, so it no longer intersects with Arlington Street at Arsenal Street across from the mall entrance near Home Depot.

The proposal by the Massachusetts Department of Transportation would move the roadway so it connects with the intersection of the west side of Greenough Boulevard at Arsenal Street. This proposal, however, would require using land that is now privately owned.

Doing so, however, would make the intersection much less complicated, McQuillan said.

While mitigation is planned for the east end of Arsenal Street, Town Councilor Lisa Feltner said she wants to see more improvements made on the other end of the street in Watertown Square. She noted that 30 percent of the traffic from the mall is expected to go that way.

Part of the plan calls for putting in multi-use paths, which can be used by walkers, joggers and bicyclists. One would be put at the entrance closes to the Harvard Vanguard Medical Associates building, and would connect from the Watertown Greenway, which runs behind Target, through the mall property and to Greenough Boulevard.

Heidelberg said the hope is to link to other paths in the area, too, including making new paths through next door Arsenal Park to the Arsenal on the Charles property owned by Athenahealth.

“It should be more of a network of paths,” Heidelberg said.

Feltner said she would like to see a separate path for bicycles and for pedestrians. Maria Saiz, who commutes by bicycle into Boston along the path by the Charles River said she agreed. She said she struggles to navigate around walkers and joggers, some of whom stop suddenly and turn around right into the path of cyclists. 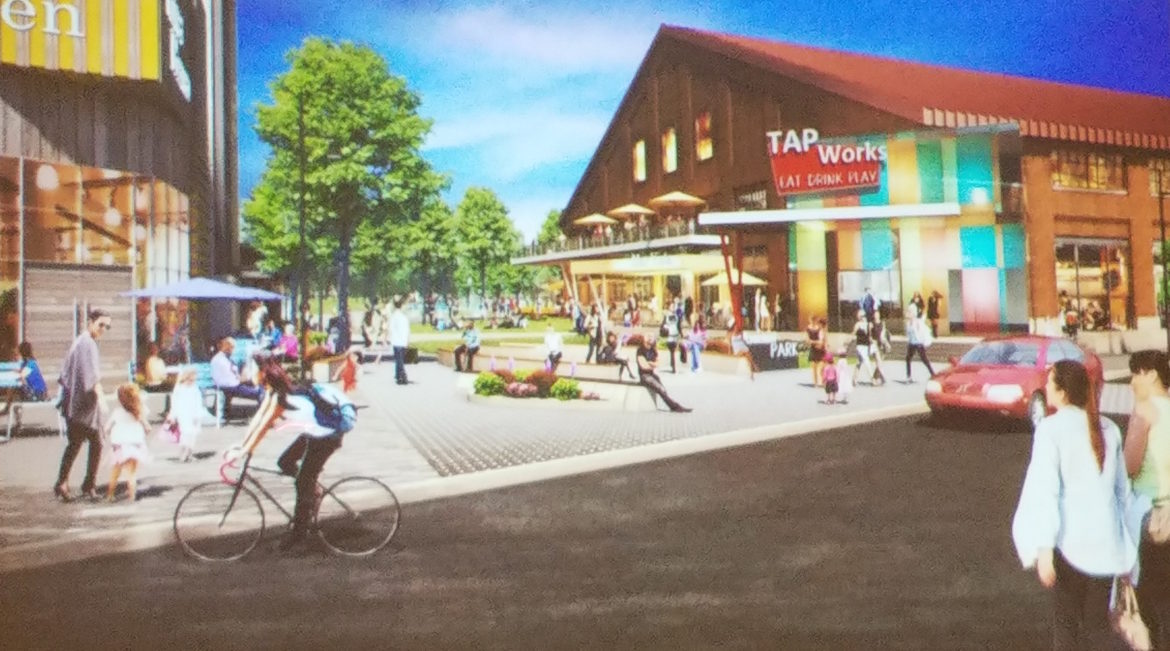 A look at the proposed new outdoor area which would be below where the food court now sits in the Arsenal Mall. In the background is Arsenal Park.

Designers also presented some new views of what the new mall would look like, including three animated “drive throughs” of the project. Those will be posted on the project website, which can be seen by clicking here.

Some at the meeting said they believe the buildings along Arsenal Street, which will be six stories and 69 feet tall (the size of the new Residence Inn by Marriott) are too big, and block the view of the historic Arsenal building where Marshall’s is now located.

Eric Brown, an architect with PCA, said there will be spaces between the buildings where you can see and walk through to the older building.

Another addition to the site would be a 12-story residential building, which would sit near the back of the property, east of the building with Marshall’s and south of the one with Old Navy.

McQuillan said the proposal is not nearly as dense as allowed by the town’s zoning. It could have a floor area ratio (FAR) of 2.0, but the proposal would have an FAR of a bit over 1.1.

Even then, McQuillan said he and his team are struggling to make sure the project is financially viable.

Developers plan to submit the plan to the Watertown Community Development and Planning Department in September so they will make it onto the October Planning Board schedule. If the Master Plan is approved, then they will have to come back to get approval for each building in the plan.