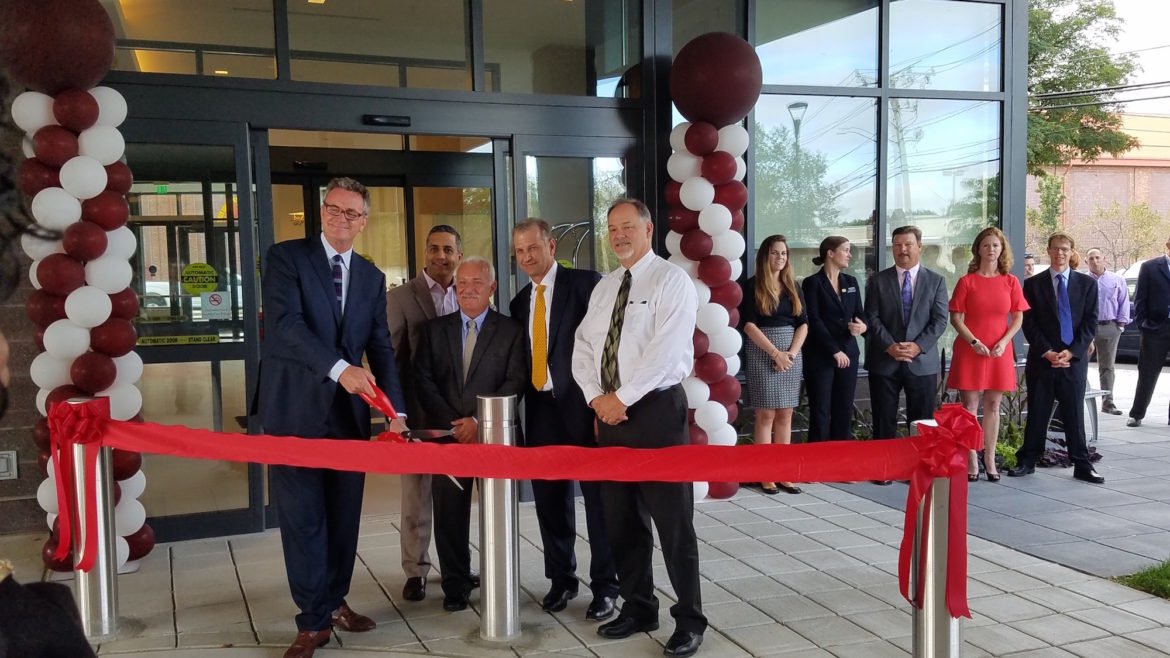 Since the 1980s, Watertown officials have talked about having a hotel in East Watertown, and this week the Residence Inn by Marriott had a ribbon cutting to officially open the new 150 room hotel on Arsenal Street.

The hotel went up on the former site of Charles River Saab, across from the Arsenal Mall. The owners, Boylston Properties, also own the mall and have plans to renovate that area too.

Boylston Properties Principal Bill McQuillan thanked his colleagues, designers ADD Inc., builders Procon Inc., and Stonebridge – the operators of the hotel – for “turning and idea into a beautiful, much needed amenity for Watertown.”

While the ribbon cutting was held Sept. 20, the hotel opened nearly three weeks prior on Aug. 30 and they instantly had customers, said Jeff Heidelberg of Boylston Properties.

“Marriott said it was OK to book rooms at about 2 p.m. and the first night we sold a number of them,” Heidelberg said. “We have already had some nights when we sold out.”

Korinne Robertson, sales and marketing director for the hotel, said the Residence Inn has had a mix of business travelers and tourists.

“We have a close relationship with Athenahealth, and corporate business in the area has been great,” Robertson said.

The hotel has a mix of studios, doubles, and two-bedroom suites. Rates fluctuate with time of year, day of the week and with size of the room, but they rent for significantly less that downtown Boston hotels, McQuillan said.

Watertown officials have eyed hotels on the east end of town for years. The first Town Council President, Mal Whitney, advocated for one on the former U.S. Army land on Greenough Boulevard, which recently was cleaned up and turned into a passive recreation area.

McQuillan said he was first approached by current Town Council President Mark Sideris about putting a hotel in town five years ago when Boylston was trying to get a liquor license for Miller’s Ale House. Sideris heard that McQuillan was building a hotel in the Fenway.

“We had not yet broken ground on in Fenway yet, but he told me they needed a hotel in Watertown,” McQuillan said. “He said what can you do? Can you build us a hotel?”

For more information about the Residence Inn by Marriott, located at 570 Arsenal St. in Watertown, go to www.marriott.com/hotels/travel/boswx-residence-inn-boston-watertown