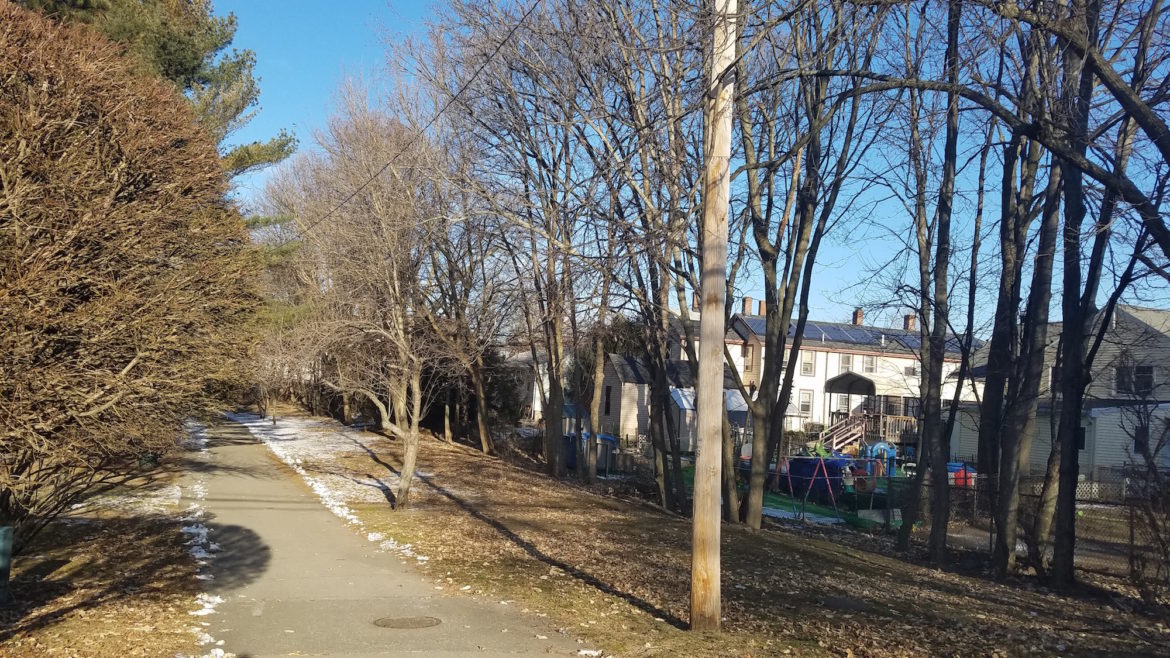 Trees along the Community Path between Whites Avenue and Waverley Avenue have been marked for removal by the City of Cambridge's Water Department.

Trees along the Community Path between Whites Avenue and Waverley Avenue have been marked for removal by the City of Cambridge’s Water Department.

Residents have reacted strongly to the news that 25 trees behind Town Hall and along the Community Path will be removed.

Confusing the matter more is the fact that the trees sit on land that is owned by the City of Cambridge, despite being within the limits of Watertown and in some cases what appears to be people’s back yards.

According to a letter sent by Cambridge’s Water Department to a Watertown resident questioning the removal of the trees, the depth of the pipe below the surface is three feet but can be as little as one foot. In their surveying of the pipe, Cambridge officials found a piece of pipe blocked by roots near Arsenal Street.

Town Council Vice President Vincent Piccirilli, who represents District C – where the trees are located – responded to questions from Watertown News about the tree removal.

1) How come the City of Cambridge has control of land and the ability to remove trees that are located in Watertown?

Vincent Piccirilli: In the 1880’s Cambridge built a new drinking water reservoir (Stony Brook) in Waltham, and purchased a strip of land in Watertown to bring a water pipe (the Stony Brook Conduit) to the Fresh Pond Reservoir in Cambridge. This is not an easement, Cambridge owns the land (a 20 ft. wide strip) outright, paralleling the former Watertown branch line railroad tracks. As with any private property owner, they have the right to remove trees on their own property without obtaining any permit from the Town. Cambridge has to comply with federal standards for maintaining a pubic drinking water supply.

2) Some of the trees being removed are behind fences and look like they are in people’s back yards. Who owns these trees and can residents prevent them from being removed?

VP: Over the years since the railroad tracks were removed (mid ’60s), many of the abutting homeowners extended their backyards over the Cambridge property, sometimes building driveways, walls, fences, sheds and decks. If you walk along the pathway, you will see survey stakes in backyards – that is where the actual property line is, and the space between those stakes and the fences is actually owned by Cambridge, not the homeowners. Cambridge notified the homeowners of their encroachment, but has not taken any legal action; however in several instances they have removed items erected by homeowners to get access to the underground structures. This includes cutting down some (but not all) trees in this 20 ft. wide strip of land.

3) Have Watertown officials talked with Cambridge officials about reducing the number of trees removed? What about replacing trees removed with new ones?

VP: Yes, discussions between Watertown and Cambridge have occurred. Trees that were cut down over the water main cannot be replaced. This is not parkland, this is public water supply infrastructure. The trees that grew there apparently were seeded naturally, and Cambridge neglected to perform routine maintenance for many years, resulting in the current overgrown situation. I do hope that Cambridge only removes what is necessary, and that any mature trees along the Watertown edge of the property that do not represent a threat to the infrastructure, could remain.

4) When were residents impacted by the removal informed that the trees would be taken down, and how come the removals were not announced to the general public until right before they were to take place?

VP: Individual property owners were notified by Cambridge of the 2015 survey results with a warning to take action, as you can see in the attached documents sent to the Town Council. This is a property dispute between abutting property owners, and there are no requirements to notify the public at large of this (as with any other private property dispute). Again, this is not Watertown public property. The public notification by [Tree Warden] Chris Hayward was advisory only, to reassure the public that no trees on Watertown public property were being removed, only trees on private property.

5) Neighbors of the Cambridge property have other concerns besides the trees, such as dilapidated fences and trash in the area. Will Cambridge be working on these issues too?

VP: I have spoken with the Town Manager on next steps after Cambridge completes its maintenance work in the area, which may include significant excavation to repair or replace any damaged sections of the water main that they may find. When (or if) Cambridge requires encroachments on their land to be removed, or if they will allow abutting homeowners to continue use this land, is up to Cambridge. I have asked that Watertown undertake efforts to clean up our property in Linear Park and along the north of Saltonstall Park, and explore opportunities to work with Cambridge to beautify their water main property alongside our public parkland. We need to explore our options going forward, and there will need to be more public discussion of this. We do need to be mindful, however, of both the property rights and privacy of the abutting homeowners.

6 thoughts on “Q&A: Town Councilor Talks About Removal of Trees in Town by Cambridge”