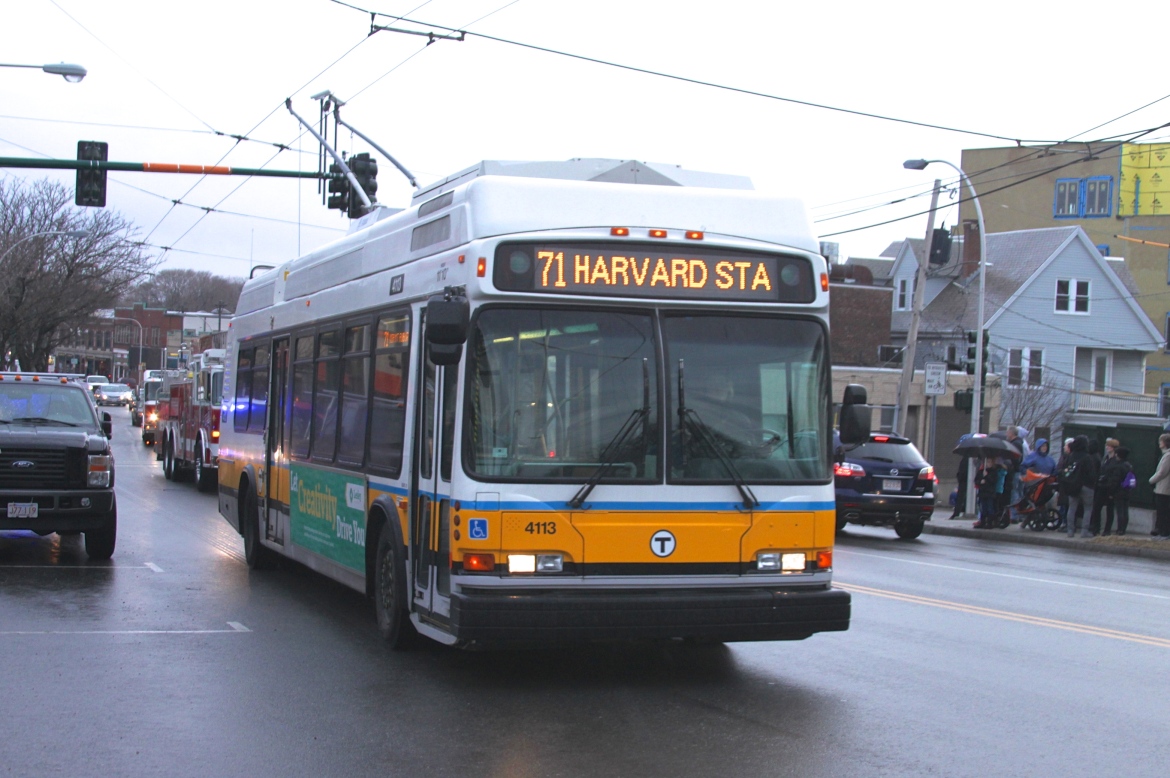 The MBTA may change to bus routes in Watertown, adding new routes and improving all routes by making changes to fare collection, but all these moves will take some time.

Wednesday night representatives from the MBTA and other transportation officials spoke to the Town Council’s Ad Hoc Committee on Transportation. They also went into some options that had not previously been discussed in Watertown.

The focus of the meeting was on the 70/70A bus, which runs through Watertown on Main Street and Arsenal Street and goes from Waltham to Cambridge. The route is one of the longest in the MBTA system, said Melissa Dullea, director of Planning and Schedules for the MTBA. The T has looked at changing the 70A, which does a loop up into North Waltham, to make the buses more reliable.

“We have talked about creating a North Waltham Shuttle to replace the 70A,” Dullea said. “The two different route lengths creates bunching and irregular gaps.”

When the MBTA looks at making changes to service, Dullea said, they look at short, medium and long term changes. Shorter ones often are those that do not need more equipment and more funds. She said the change to the 70A could be done without more buses.

“If we used one bus for the (North Waltham) loop and the rest on the trunk (main route) we believe we would see a 7 percent efficiency increase,” Dullea said.

Other changes to the 70 bus that have been considered, Dullea said, is running more buses to Market Place Drive in Waltham, where Market Basket is located, on weekends rather than going to Cedarwood, which is largely offices.

Also, a few stops have been recommended to be consolidated with nearby ones. One would be in Watertown on Main Street near Town Hall.

The changes will be considered in the next Service Plan, which can take about two years, Dullea said.

Councilor Susan Falkoff said she was disappointed to hear it would be such a long wait.

“I was here two years ago when they talked about the 70 and 70A and we are hear again and it sounds like it will be another two years,” Falkoff said. “There are a lot of slides but nothing seems to happen.”

A suggestion to make the 70 and 70A more efficient would be to create a temporary bus lane on Main Street east toward Watertown Square. A similar move has been made on Broadway in Everett, Dullea said, and about six minutes were saved in the morning commute. Dullea said the MBTA estimates doing the same thing in Watertown could save 4 minutes.

The idea would be to use the parking spots along Main Street from French Street (just west of Waverley Avenue) to Watertown Square from 4 a.m. to 9 a.m.

Dullea said it worked in Everett because most of the businesses on that stretch do not open until 9 a.m., so the parking is not needed. They do not do it in the evening because some of the business stay open later. It is currently a pilot project, and the Everett Public Works Department goes out each morning to put out cones to make the bus lane.

Resident Maria Saiz said she would like to see the bus lane available for bicyclists, as is done in Europe. She has seen it work there even with buses coming every couple minutes and in Watertown it would be more like every 10 minutes.

Assistant Town Manager Steve Magoon said that might be possible in Watertown, but there would be a cost to it because the DPW would have to put out cones. A possible obstacle is a potential project to bump out the sidewalk at the crosswalk between the Watertown Library and the Main Street Post Office to make it easier for pedestrians to cross, Magoon said.

The subcommittee asked Magoon to have discussions with the DPW to find out the cost and what obstacles may be in the way.

A new route that has been discussed by both the consultants from VHB doing the Arsenal Street Corridor Study and the MBTA would be a shuttle from Watertown Square to the new Commuter Rail stop at Boston Landing (next to the new New Balance Headquarters and the Bruins Practice Facility).

“There is a desire to get to the South Station area with the boom of jobs in the South Boston area,” said Laura Castelli of VHB.

The shuttle would be a connection to Commuter Rail which goes to South Station, Castelli said, and would have only one or two stops along the way, perhaps at Irving Street, School Street or Birmingham Parkway.

Castelli said the service would not likely be run by the T, but perhaps be jointly funded by the town, the T and/or the new Watertown TMA (Transportation Management Association).

Councilor Vincent Piccirilli said there are a lot of new residential areas that were not there 10 years ago, and people are working at locations where there were no jobs 10 years ago.

“The MBTA structure has not restructured the system to respond to these changes,” Piccirilli said.

He suggested they collect data about where people are living and where they are working. He believes new express buses to Watertown Square, going to the Western Suburbs but rather than going into Boston could link those people to the transportation hub in the Square and reduce the number of people driving through the area.

The Charlie Card and Charlie Ticket system is now more than 10 years old, and the MTBA will be phasing in a new, easier to use system in the next few years, said Matthew Ciborowski, Technology Policy Manager with the MBTA.

“We are looking at London, Berlin, Seuol, Tokyo, Chicago and L.A. and taking all the great things from there and using them here,” Ciborowski said.

Riders will be able to pay to ride the MBTA by tapping a fare card, their cell phone (like with Apple Pay) or, in the future, their credit cards.

“People will be able to board at every door on every buss without stopping for a transaction,” Ciborowski said.

This would eliminate the delay on the outbound 71 and 73 buses where now people have to pay when they get off the bus. Ciborowski said said the new fare system will make MBTA routes, on average, 10 percent faster.

Another feature of the new system would be that people could make transfers to local Regional Transit Shuttles using the same payment system. He also said the new fare machines will dispense cards, so riders don’t have to go into Downtown Crossing to get one.

People’s data will be kept in a cloud-like system, and Ciborowski said the data for the payments will be kept separate from people’s personal information. Some in the audience still worried about security of their personal data.

The MBTA put out a request for proposals for the new fare system in 2016 and still awaits all the applications. After a contract is awarded – likely this year – it will take two years to get the new system online, Ciborowski said. There will be a six month period after the new fare system starts before the old system is phased out.