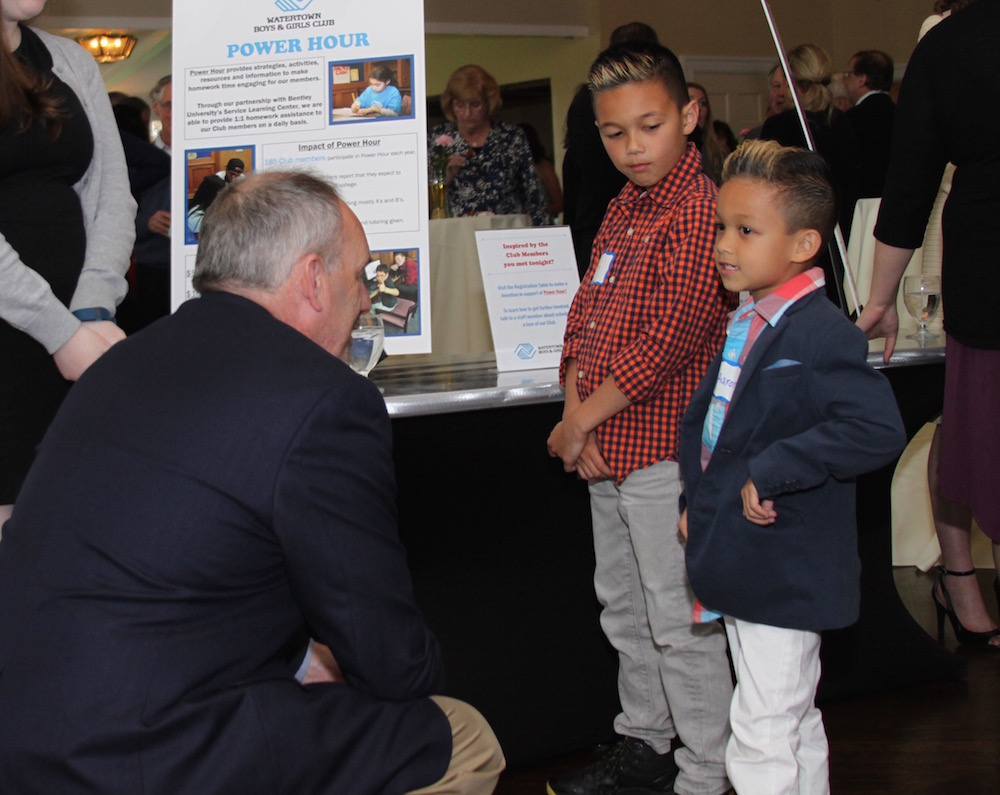 Two members of the Watertown Boy's & Girl's Club share their experiences at the club with one of the attendees of the Annual Spring Auction.

Two members of the Watertown Boy’s & Girl’s Club share their experiences at the club with one of the attendees of the Annual Spring Auction.

The best of the Watertown Boy’s and Girl’s Club was on display at the Annuals Spring Auction, presented by the people who know the place best – the club members.

Guests at the fundraiser at the Oakley Country Club learned about activities at the club and recent improvements from youngsters who attend the club. The club has about 1,000 members and the facility on Whites Avenue attracts about 130 members a day.

One member, Kat Nilov, read the essay that won her the club’s “Youth of the Year” award. She said that when she and her mother moved to Watertown from Staten Island she was in middle school and had not friends. She found a place where she fit in at the Boy’s and Girls Club.

“Joining the Boys & Girls Club was the best decision I could have made,” Nilov said. “It started my journey to become a stronger, healthier, and more confident person. Without the Club to support me, I would have been left to the influences of the streets. My five years here have changed me for the better.”

The children who talked about their experiences at the club were part of the Youth Service Club, said Program Director Chris Crombie.

“They are the leaders of the club,” Crombie said. “They are a good influence on younger members. They get good grades and are helpful to the club staff.”

Renee Gaudette, the executive director of the club, said the club provides much more than a place swim or play in a gym.

“We greet them by name and ask them, how was their day?” Gaudette said.

Gaudette said earlier this year a 9-year-old boy was not feeling safe in his home, so he left.

“He ran away, and he ran to the Boy’s and Girl’s Club,” Gaudette said. “He said he didn’t where else to go to feel safe.”

The money raised at the auction helps provide services for the club members, who pay $25 a year to be a member and access the club. There are all kinds of activities, said Mark Tardiff, president of the Boy’s & Girl’s Clubs Board of Directors, including guitar lessons, live animal visits and visits to the Central Rock Gym to do indoor rock climbing.

Some of the recent upgrades to the Club included equipment upgrades at the pool and a new gym floor, which replace the original one installed in 1972.

The auction included dozens of donated items. Some were auction live while others were offered in a silent auction.