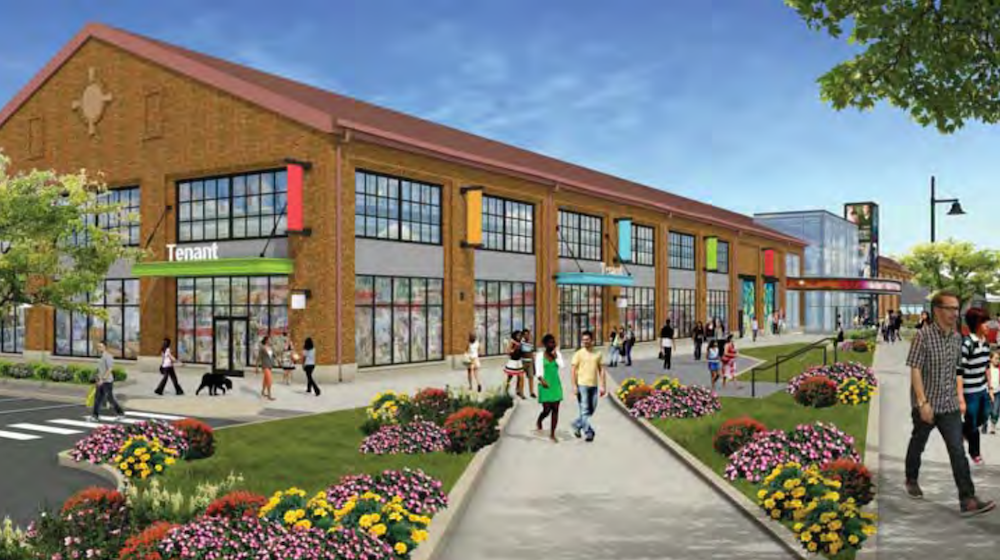 A rendering of what Building E, where Old Navy is now located, will look like after the renovation. The movie theater will be where the glass entrance is shown.

A rendering of what Building E, where Old Navy is now located, will look like after the renovation. The movie theater will be where the glass entrance is shown on the far right.

The Watertown Planning Board voted Tuesday night to approve the first phase of the renovation of the former Arsenal Mall, which includes the two historic buildings, but developers said they may not be able to meet the energy efficiency goals without impacting the historic look.

This part of the Arsenal Yards project focuses on Building A (where Marshall’s and the food court are located) and Building E (Old Navy and Golfsmith). Meanwhile, the addition made in the 1980s which connects the two large historic building will be demolished, said Project Manager Jeff Heidelberg of Boylston Properties.

Building A will have two stories, and include a new glassed main entrance near Chipotle. Another entrance will be created on the east end of the building, which will open into what developers have dubbed the River Green. This will be an open area leading to Arsenal Park. It will include seating areas and an artificial turf area for children to play on, or where a band can play a concert, said Chris Jones, a landscape architect with Carol Johnson and Associates.

Town Councilor Tony Palomba reminded the Planning Board that artificial turf at the track at Victory Field sparked much controversy a couple years ago. The location in the Arsenal Yards Bill McQuillan, principal of Boylston Properties, would be very small compared to Victory Field. Architect Eric Brown said that similar artificial turf areas have been very popular at MarketStreet Lynnfield.

Building E will be the location of the cinemas, and a new entrance will be created for them midway down the long building. The entrance will come out on another large pedestrian area.

In both buildings, the walls will be opened up and large windows will be installed on the exterior. Inside, developers hope to keep some of the original brick and trusses exposed, however this could be a problem in meeting the LEED Silver certifiable measure that is required in Watertown’s zoning.

“We would have to put insulation on the interior brick wall, something we prefer not to do,” Heidelberg said. 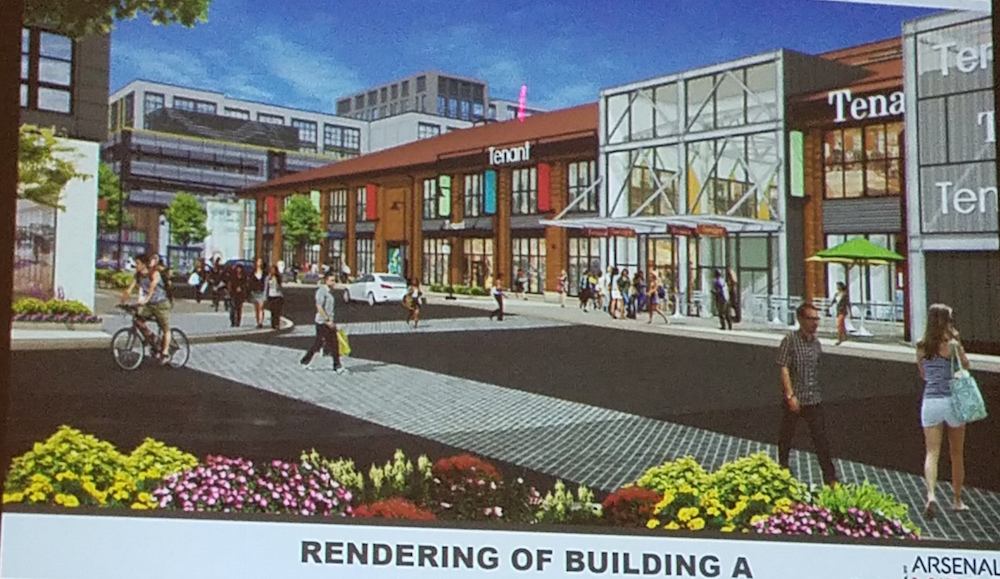 A rendering of what the renovated Building A at Arsenal Yards. The glass atrium would be at the current main entrance near Chipotle.

There is a point system to meet the LEED Silver standard, but it also requires a 20 percent reduction in energy use. Planning Board Chairman John Hawes asked if the energy efficiency could be measured campus wide, allowing developers to keep the brick wall if extra measures are done in other buildings. Heidelberg said Boylston’s consultant said the 20 percent reduction must be made on all buildings.

Planning Board member Janet Buck suggested looking at insulating the ceiling, which was done at the Arsenal Center for the Arts in another part of the former Watertown Arsenal. Also, she said they should insulate areas of the walls that are in the back of stores, so not visible.

Heidelberg said they would insulate backroom walls, but he does not believe they could put insulation on the ceiling. McQuillan said the mall is working with an “exciting entertainment tenant” which wants to use one of the spaces with the exposed bricks.

Hawes said that keeping the historic feel of the building is important, and he believes something can be worked out but it would not happen at Tuesday’s Planning Board meeting.

“If we were dealing with Chartre Cathedral, there is no way the French would say we need to cover it up to meet energy efficiency requirements,” Hawes said. “If we are shooting ourselves in the foot, we need to see where we can adjust the ordinance. The consensus from this board is we want to have leeway.”

The Planning Board voted 5-0 to approve the special permit and site plan review for the first phase of the Arsenal Yards.