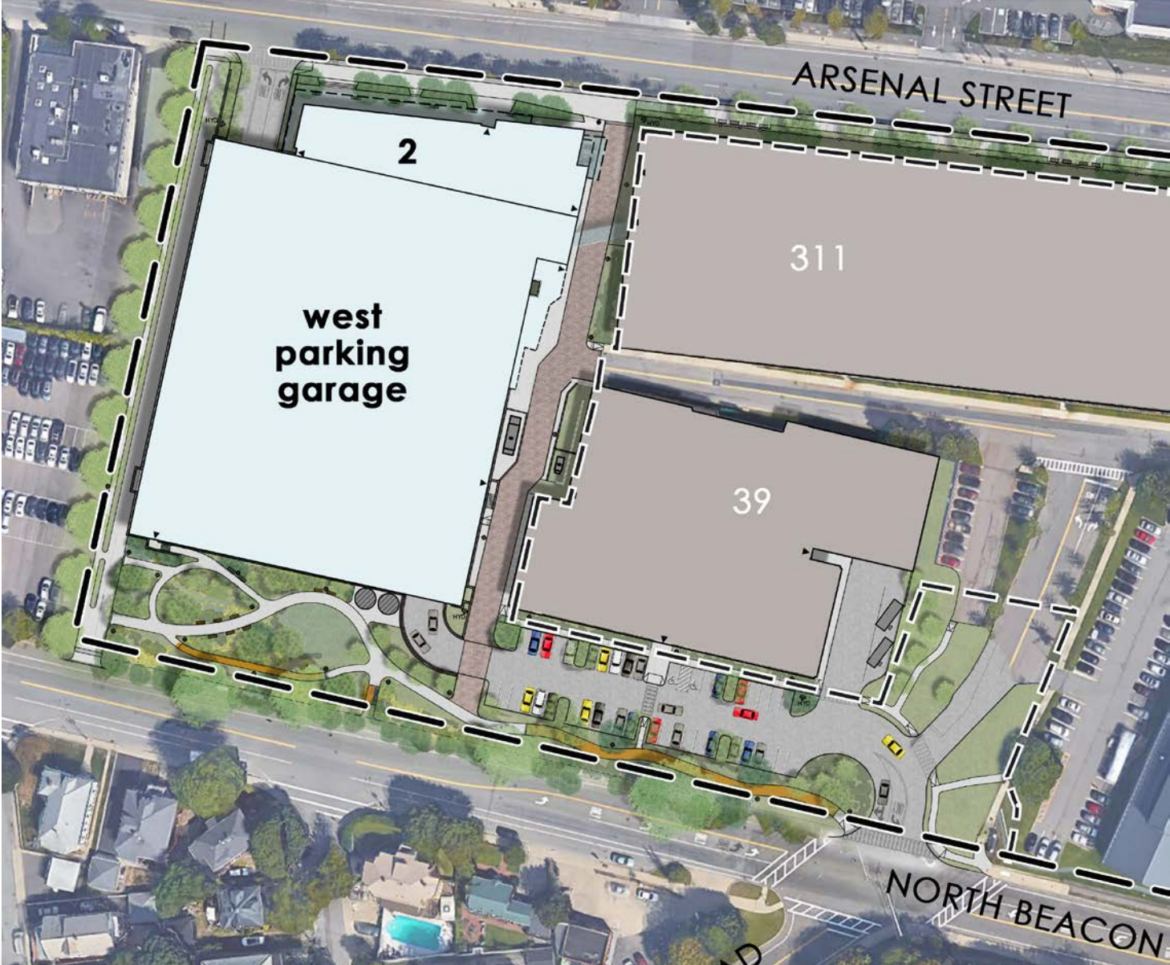 An overhead view of the new additions to the west side of the Arsenal on the Charles Project included in Phase 1 of the project.

Construction of the new west parking garage at the Arsenal on the Charles by Athenahealth has impacted neighbors living on and near North Beacon Street.

Residents living near the east end of North Beacon Street in Watertown reached the end of their patience this week and let officials at Athenahealth know about how upset they are with the impact the company’s construction project is having on their neighborhood.

Athenahealth has started construction on a new parking garage on the westside of its campus at the Arsenal on the Charles – which is the beginning of a multiphase project to expand the campus.

Neighbors say cars have spilled out of the campus and are parking on North Beacon Street and side streets. Then this week construction trucks began coming up Charles River Road – normally a no-truck route – and are using a driveway that they were told would only be used by emergency vehicles.

Mark Blair, Athenahealth’s manager of the Environment Team and Construction, said that entrance will be limited to emergency vehicles after the construction is complete.

Bay Street resident Marcia Ciro said the residents asked multiple times whether the entrance at the far west end of the campus would only be used for emergency vehicles and repeatedly they were told, yes.

Town Councilor Lisa Feltner said residents expected Arsenal Street to be used for trucks, and she wondered why that was not happening.

He added that other options are being explored.

“We are testing three routes next week,” Mee said. “We will not choose one route. We are looking to disperse traffic over three routes.”

As for the parking, Ciro said that the streets around Athenahealth has become “a corporate parking lot.” Residents noted that cars have recently begun parking on Charles River Road, and that two-hour parking signs disappeared at some point.

Neighbors wanted to find out whether Athenahealth had alerted all its employees that they should not be parking in neighbor hood streets. They have tried to call police, but Ciro said they do not check license plates to see if some cars are owned by people in the neighborhood and they “blanket ticket everyone.”

Paul Street resident Sarah Ryan said this is not a new request.

“We have asked for the same things for years,” Ryan said. “It is very frustrating.”

Town Councilor Angeline Kounelis said that Athenahealth officials said they would be checking plates around the campus to see if employees were parking there.

Athenahealth will tell all its employees not to park on streets in the neighborhood, and Blair said when the garage is finished employees will get stickers that the company will be able to track so they will know if they are parking on the roads.

Residents said they are also disappointed with Watertown officials for letting the situation occur.

“The town is incapable of dealing with the changes that will transform the town,” Ciro said.

Feltner said Town Councilors and State Rep. Jonathan Hecht are trying to find out why the signs are missing on Charles River Road. She also added that there are no parking restrictions on North Beacon Street east of Charles River Road, and the town would have to submit a request to change that to the DCR.