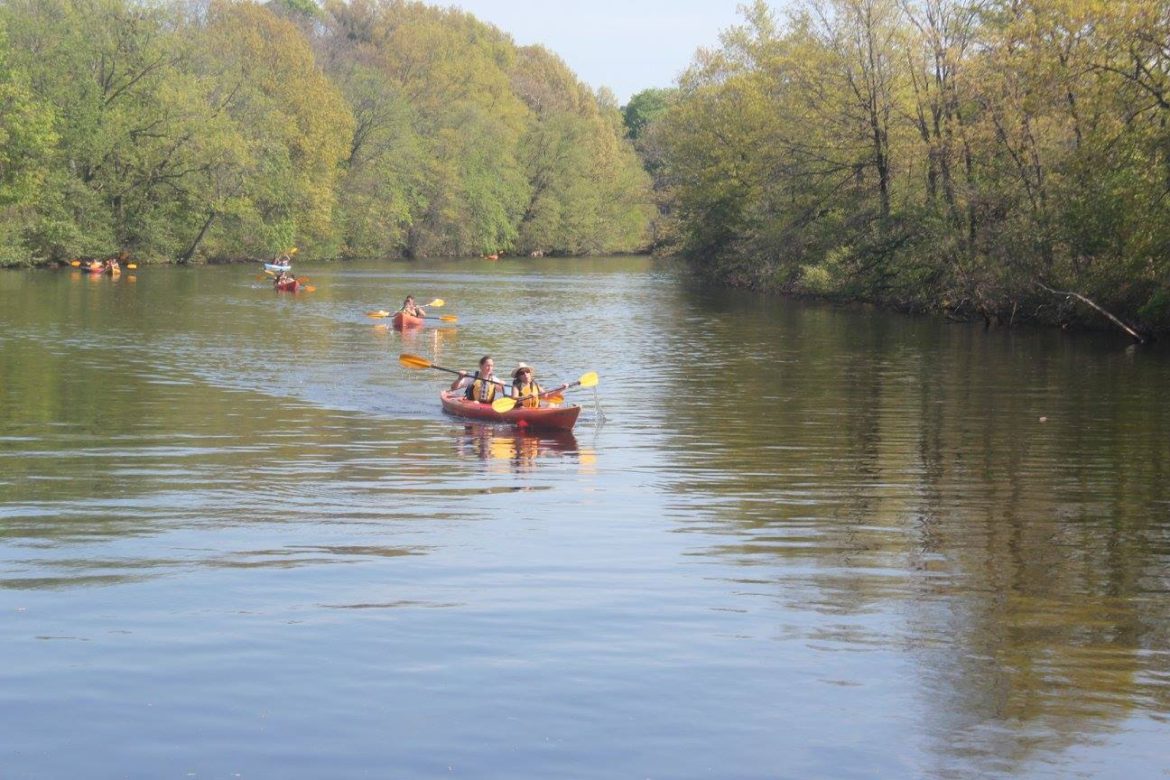 Kayakers hit the Charles River Saturday thanks to a joint effort by the Watertown Recreation Department and Live Well Watertown.

Kayakers could hit the Charles River from Watertown’s Squibnocket Park if $25 million in I-Cubed agreement between Athenahealth, the Town of Watertown and the Department of Conservation and Recreation is approved.

Watertown could get $25 million in improvements to roads, parks and paths without putting up a dime, but attendees of a meeting last Thursday were not leaping to seal the deal.

The proposed work would be part of the I-Cubed program, in which a developer – in this case Athenahealth – bonds money from the state to pay for the infrastructure and teams with public entities – the Town of Watertown and the Department of Conservation and Recreation – to do the improvements.

The bonds will be paid by the increased tax revenue going to the state from Athenahealth’s campus expansion and the additional jobs it will create. None of the money can be spent on Athenahealth’s property.

Thursday night, Athenahealth officials presented the list of projects it would do with the money. They include:

$700,000 – Completing the improvements of the Watertown Riverfront Park on the north bank of the Charles River

$1.7 million – Greenough Boulevard: bicycle and pedestrian path upgrades, improvements to the roadway and signal upgrades (including a traffic light at Greenough and North Beacon)

$400,000 – Arsenal Park: extension of the Community Path through the park

$2.7 million – Drainage and parking improvement on Talcott Avenue near the Commander’s Mansion, cosmetic improvements to the Mansion and grounds and realignment of Talcott Avenue, and possibly linking it to either North Beacon or Greenough

The I-Cubed program would be a “win-win” for Athenahealth and the town, said  Mark Blair, the company’s Manager of Environment and Construction. While the town would get improved parks, roads and paths, it also helps the company.

“(The improvements) really effects our ability to attract talent in a very competitive environment,” Blair said.

Dan Driscoll, director of Recreation Facilities Planning for the DCR, who said the I-Cubed money will allow the DCR to complete project which it has identified but for which it had no funding source, including the Riverfront Park and Squibnocket Park.

“We are fully on board with this,” Driscoll said.

All the work must be completed within three years of approval of the project by the Executive Office of Administration and Finance.

Several people complained that the list of projects is set in stone with no input from the public.

“There is enormous pressure to move, move, move,” said resident Jonathan Bockian. “There is not a Planning Board review. Once the Town Council votes it is out of our hands.”

Even Town Councilors said they felt uncomfortable, and noted that the I-Cubed program was first discussed in February 2016, but there has not been a public meeting or discussion by the Council since then.

“You talked about it for a year there was little (public) conversation,” said Councilor Aaron Dushku. “It is disappointing that (the Councilors) were not part of the conversation.”

The projects were selected from the Watertown Comprehensive Plan and from the DCR’s Charles River Basin Master Plan and other plans.

Councilor Tony Palomba said others could have looked at the Comprehensive plan and come up with a whole different list of projects for the I-Cubed list. He also wanted the public to have more of a say.

“I don’t see time set aside for public input into the projects that you would expect, Palomba said. “It is difficult for the Town Council to sit and think about $25 million in projects when we have almost zero input from the public.”

The only two additions to the list since the last time I-Cubed was discussed, said Bill York, an attorney representing Athenahealth, were the Watertown Square work and the Riverfront Park improvements.

Resident Elodia Thomas worries that this will add even more construction in an area of town where several major projects have already been approved.

“It is going to be a big bang (of improvements) at the end of three years, but how do we get to the end three years without killing each other?” Thomas said.

The Council must approve I-Cubed by a 2/3 majority, and then the Office of Administration and Finance must approve it. If approved, the clock starts ticking on the three year deadline to complete the project.