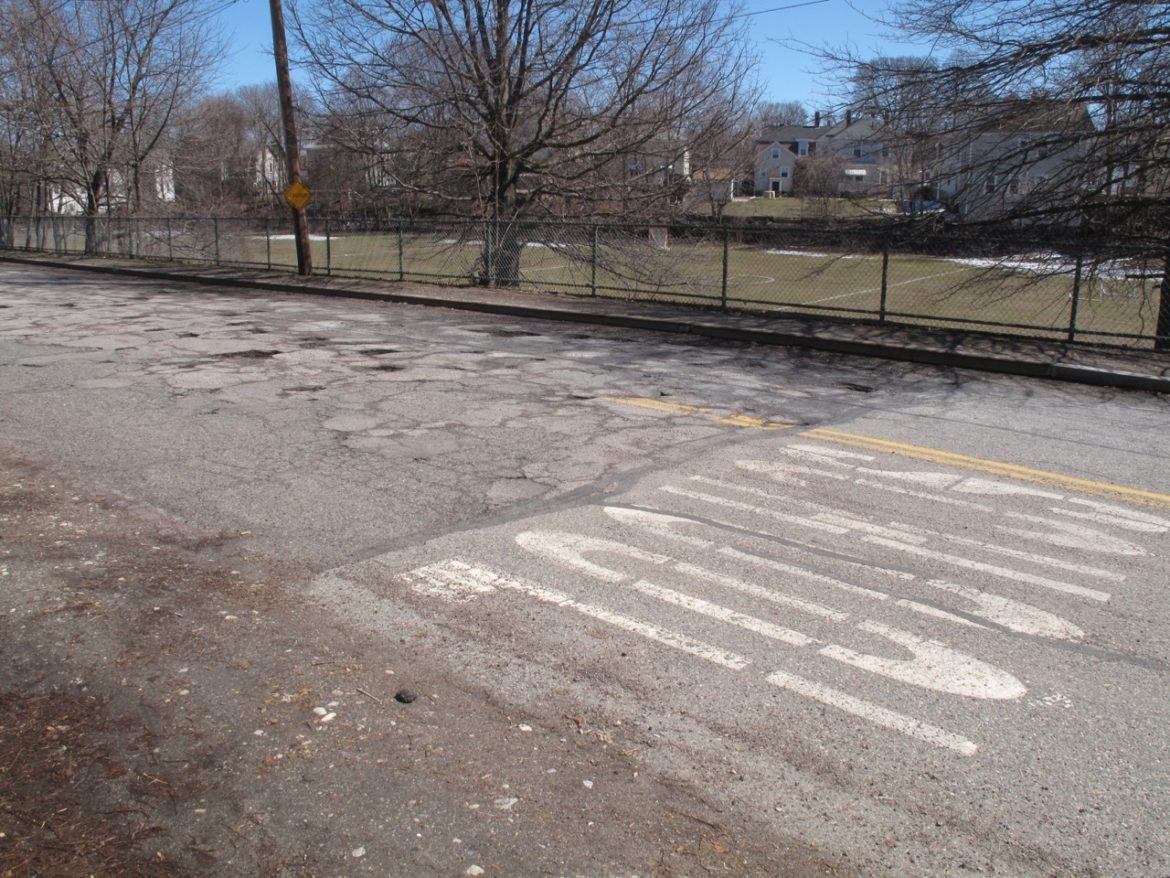 Potholes pock the section of Jackson Road in Watertown, while the area in better condition is in Newton. This is one of many complaints by neighbors on the cross street of Theurer Park.

Potholes pock the section of Jackson Road in Watertown, while the area in better condition is in Newton. This is one of many complaints by neighbors on the cross street of Theurer Park.

Each year, to celebrate the end of school, the residents of Theurer Park in Watertown shut down their street and have a block party. Kids can run around in the street and ride their bikes without fear for their safety, but the rest of the year their parents make sure they stick to the sidewalks.

The street is a short, block-long road on the Southside of Watertown, but it has more than its share of problems, residents say. Speeding cars, pot holes, mud-filled planting strips and lack of crosswalks – problems facing many streets in town, but few suffer from all of them.

Filled with two-family homes, Theurer Park also has 18 children and 15 dogs residing there. With all the problems, residents point to one.

“The biggest concern is the speeding, with so many kids on the street,” said Venda Mercer, who has lived on the street for four years.

Part of the problem the location of the street. It sits directly across Watertown Street (Rte. 16) from the main entrance and exit for the Stop & Shop Plaza. There is no stop light or stop sign on Watertown Street to control traffic, so cars tear across the intersection and keep going at a high rate of speed on Theurer Park, said resident Marie Schick.

Neighbors have been complaining to town elected officials and staff for years. They asked for granite curbs to be put in to make cars park in the street. This would prevent planting strips from being torn up and, more importantly, make the roadway narrower and thus make traffic slower. They also suggested that the road could be made into a one-way road. They also requested crosswalks on Watertown Street and on the other end on Jackson Road.

Residents they say little has changed.

“Six years ago, there was so much traffic, and there were accidents at Stop & Shop. They did a lengthy traffic study,” Schick said. “All they did was at the end of the block they put up a stop sign.”

The cross walk to Watertown Street is there, but it does not have curb cuts for the handicap. Ron Bieringer, who moved to his home in 1984, said one of his neighbors almost got injured using the crosswalk.

Cars also go around ones stopped waiting to turn into the Stop & Shop lot, making it difficult to cross Watertown Street safely, said Marie’s husband Joe Schick. He added that just down Watertown Street, a man was killed in November when a car hit him as he crossed the road.

The DPW has applied to the state to get funding to redesign the street, but has not yet received it, Mee said. Plans include re-striping the road to make it clear that cars should not go around waiting vehicles.

The crosswalk, however, will have to be moved.

Another complaint of those living on Theurer Park is the condition of Jackson Road, which is a cut through used to get from that part of Watertown to Washington Street in Newton. Most of the roadway is in Newton, but the last block or so is in Watertown. The dividing line is clear, Joe Schick said – just look for the pot holes.

Residents have asked for a crosswalk on Jackson, because that is where the school bus taking kids to Hosmer School stops. One of the Schick’s children almost got struck by a car that failed to stop for the bus.

“The driver was on her phone and didn’t notice the big yellow bus with its lights on and almost hit our son,” Schick said. 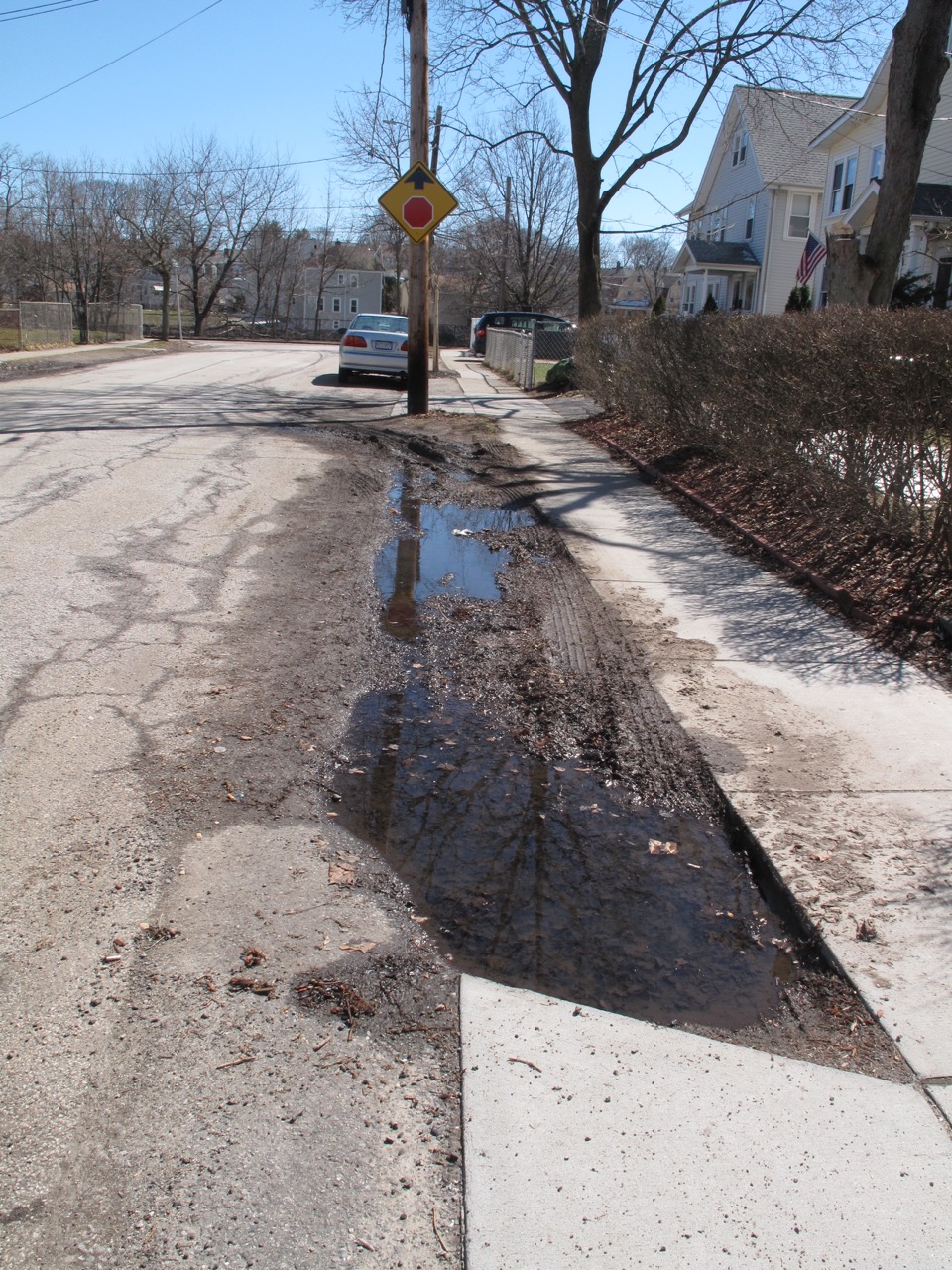 The planting strips on Theurer Park have turned to mud after cars parked on them, killing the grass.

The state of Jackson Road is a bit confusing. It has long been treated as a private way by the Town. However, there are not “private way” signs posted. If it is a private way, the town won’t replace the roadway, but they recently filled the pot holes – 42 of a foot or wider by the Schick’s count – on Jackson.

Mee called it a “no man’s land,” and said while he cannot find any documentation saying the road is owned by the Town, he is now checking with the Mass. Department of Transportation to see if they have any record that it is an “accepted road,” and therefore a public roadway.

If it is a private road, the three or four homeowners on that stretch of the road would have to pay for the new asphalt, which could cost in the neighborhood of $500,000.