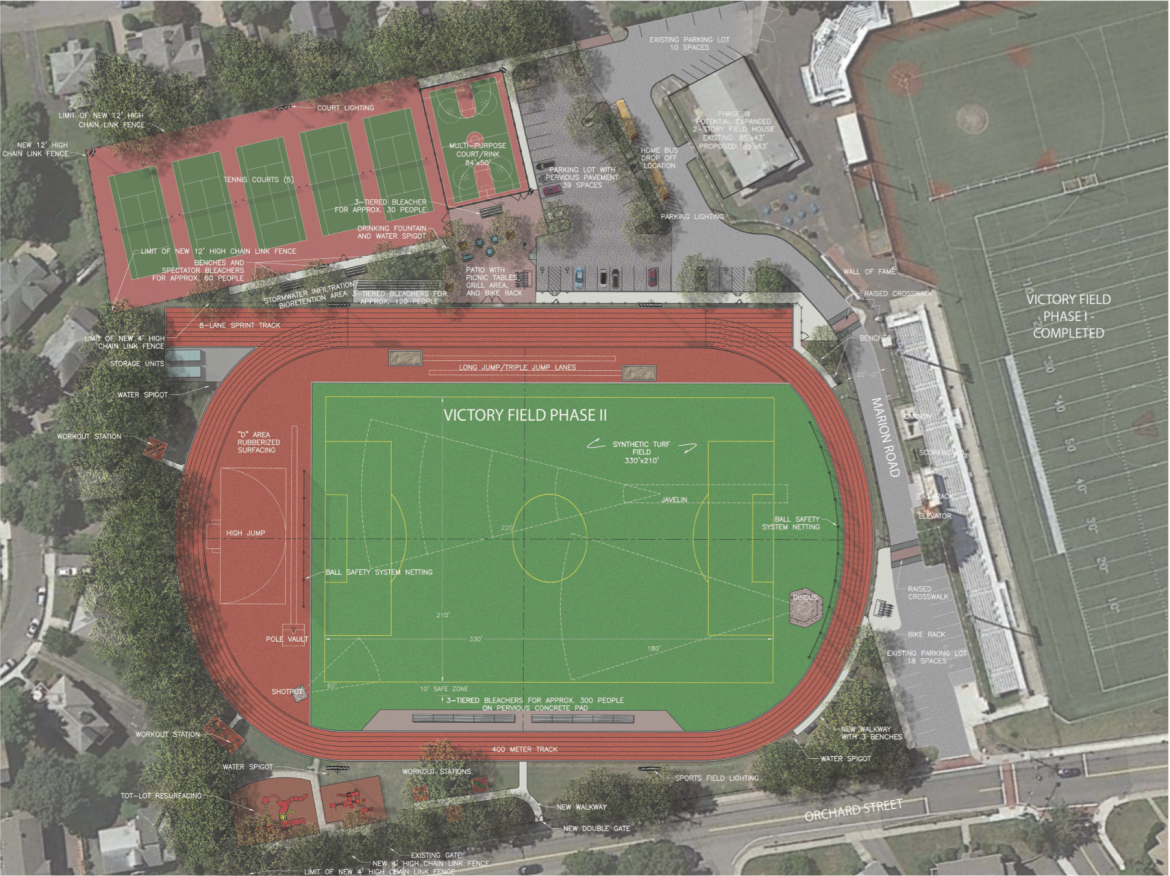 An overhead view of the plans for renovating the track area of Victory Field.

An overhead view of the area proposed to be worked on in Phase II of the Victory Field Renovations.

After more than two and a half years, the discussion about how to renovate the track and courts area of Victory Field will begin once again.

The Ad Hoc Committee on Victory Field Renovations will meet on Wednesday, May 31 at 7 p.m. in the Council Chamber of Town Hall. The group is made up of two Town Councilors, two Town officials, and five residents representing the surrounding neighborhood and sports groups (see the members here).

The committee will discuss what is being called Phase II of the Victory Field renovation. The first phase was the installation of artificial turf on the football/baseball fields at the complex.

Artificial turf was among the reasons the first attempt to do Phase II stalled in October 2014. While many coaches and sports groups pushed for the grass inside of the track oval to be replaced with artificial turf, many others opposed the move. At the time, Town Council President Mark Sideris said that a group would be appointed to make recommendations on a design proposal to be submitted to the Town Council for consideration, with the stipulation that the field inside the track shall remain natural grass and not be artificial turf.

The renovation will cover many other parts at the field, including: track and field event facilities, parking, the tennis and basketball courts, lighting, stormwater drainage system, and walls and fences.

In a memo to the committee members, Town Council Vice President Vincent Piccirilli outlined the duties of the group.

“This committee will not be considering, or making any of the financial decisions that relate to the project. All financial issues will be decided by the full town council at a Public Hearing,” he wrote. “The design as it relates to the facility will be the issue discussed and presented to the council for their consideration before considering a loan order.”

Piccirilli proposed having seven meetings, with the following focuses:

Meeting 2: track and field facilities and the area inside the track.

Meeting 3: Parking and the tennis and basketball courts

Meeting 6: Review the information and come up with a draft report

Meeting 7: Approval of the final report

All meetings of the Victory Field Renovation Committee will be open to the public. The Town Clerk will swear in the members at the first meeting.

6 thoughts on “Committee to Begin Discussion of Renovation of Track, Courts at Victory Field”