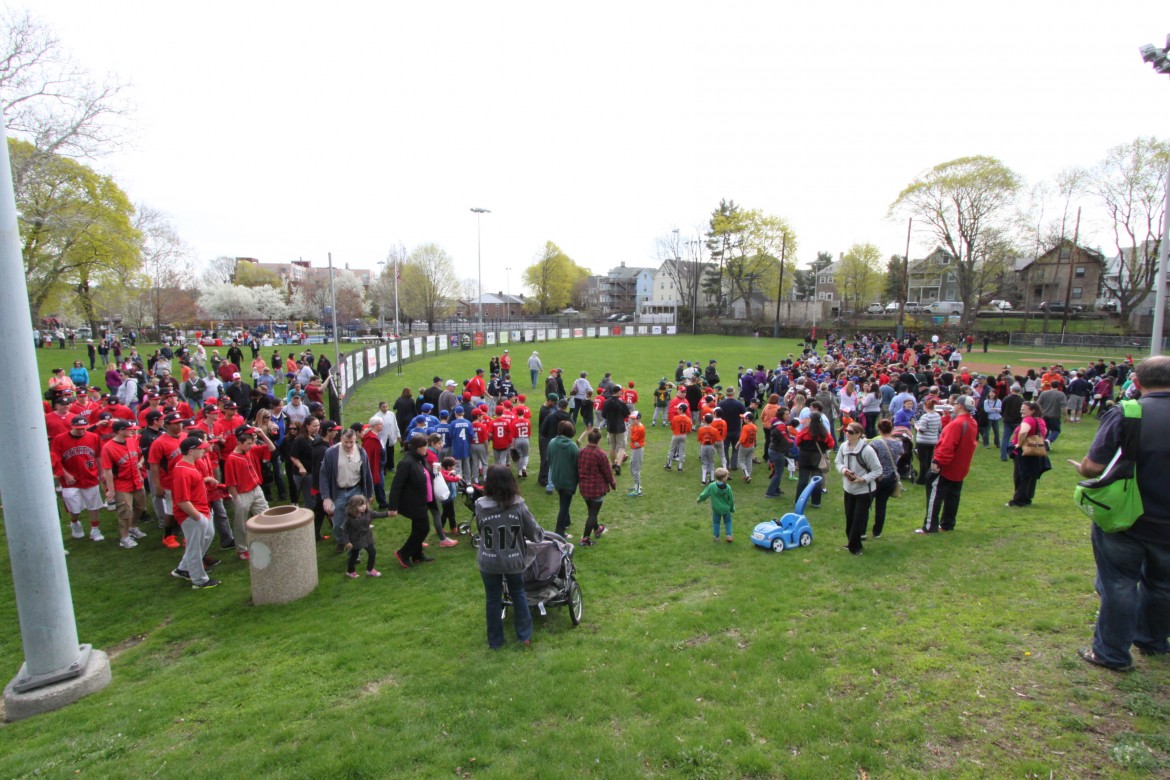 Players of all ages marched into Casey Field Saturday morning for Opening Day ceremonies. The rest of the day was filled with games.

With youth sports growing in Watertown, lights at fields such as Casey Park are a priority for the Recreation Department.

With field space difficult to find in Watertown, Recreation Director Peter Centola told the Town Council Thursday that lighting at fields is one of the main priorities for his Fiscal 2018 budget.

Some fields would get new lights, while others would get the ones already there in better working shape, Centola said. Finding practice and game time has become a problem for Watetown youth sports groups, so lights would enable the fields to be used longer.

Centola noted that discussion about Phase II of the Victory Field renovation is about to start, but is not in his budget for Fiscal 2018.

Updating the electrical boxes at Casey Park’s baseball field, Filippello Park and Saltonstall Park are key projects, Centola said. The three are part of one project.

“(Consultant) CDM Smith is in the final stages of creating the bid document and this project should be gin this fiscal year and completed by Sept. 1, 2017 to be ready for the fall season,” Centola said.

One field where Centola is not pushing for lights is the one at Arsenal Park. He said the area is near residences and the Commander’s Mansion, plus it would not give as much bang for the buck as Filippello Park.

“(Arsenal) is not that big a space, that’s why we are going with Filippello Park,” Centola said.

Centola also hopes to get new lights at some fields, including new LED lighting at Casey Park as part of upgrades. The project could also include new fencing, a scoreboard, batting tunnel, dugouts, plus a shed for the outdoor rink.

Filippello Park has lights on the Grove Street side for softball and soccer. Centola said he is interested in not only replacing those with LED lights and new poles, but also putting in new lights on the Arlington Street side of the park.

“As clearly documented, there is a critical need for additional lighting to meet the demand of our users,” Centola said.

While Councilors agreed that more lighting would help alleviate the need for field time.

“Getting upgrades is long, long, long overdue,” Sideris said. “I know that we were talking about it last year. I am looking forward to September when we can say it is complete.”

East End Councilor Angeline Kounelis wanted to make sure that neighbors are considered for both current and future lighted fields. She wondered if there was a 10 p.m. curfew for fields in town.

Centola said there was, but Kounelis said she has received complaints that field users are staying around after 10 p.m.

Other potential projects are resurfacing the courts at Arsenal Park. This might be done using mitigation from Arsenal Yards and Arsenal on the Charles (Athenahealth). Another project is resurfacing of How Dog Park and making it handicap accessible by making a sidewalk and installing a new path.