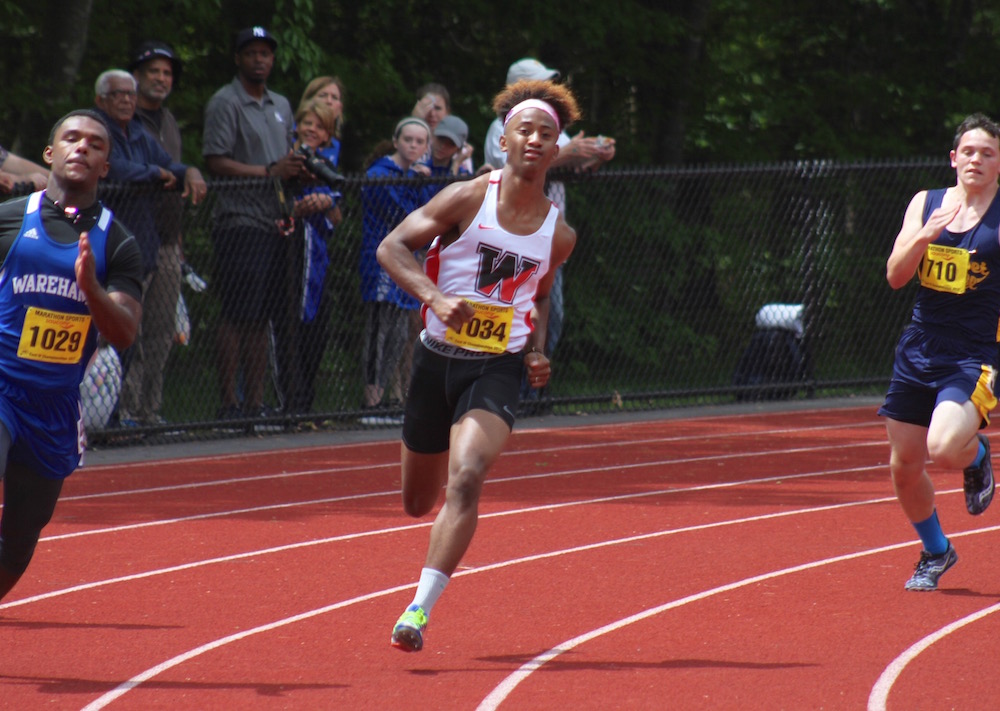 Watertown sophomore Mange Camara sprinted to a second place finish in the 200 at the Div. 4 EMass Championships.

Watertown sophomore Mange Camara sprinted to a second place finish in the 200 at the Div. 4 EMass Championships.

Watertown’s top track and field athletes came up big on Memorial Day Weekend as they took on the top high school track athletes around Eastern Massachusetts on Sunday.

The Raiders sent several athletes to the MIAA Div. 4 EMass Outdoor Track and Field Championships at Norwell High School, and showed they are among the best for schools of their size.

After his indoor season was hampered by injury, sophomore sprinter Mange Camara has had a successful outdoor campaign. He came into Sunday’s meet with the second best time in the 200 meters and proved he belonged there. In the preliminaries he ran a 22.91, putting him third fastest in the finals, where he ran a 23.00 and finished second.

“It was pretty good,” Camara said. “I got to All-States (with the second place finish).”

The weather fluctuated as clouds covered the bright sun at various points during the day. Mange said he preferred the warmer conditions for the prelims, saying “heat is good for sprinting.”

Camara also helped Watertown claim a high spot in the 4×400 relay, which finished second place with a time of 3:33.88, improving the seeded time by nearly four seconds. 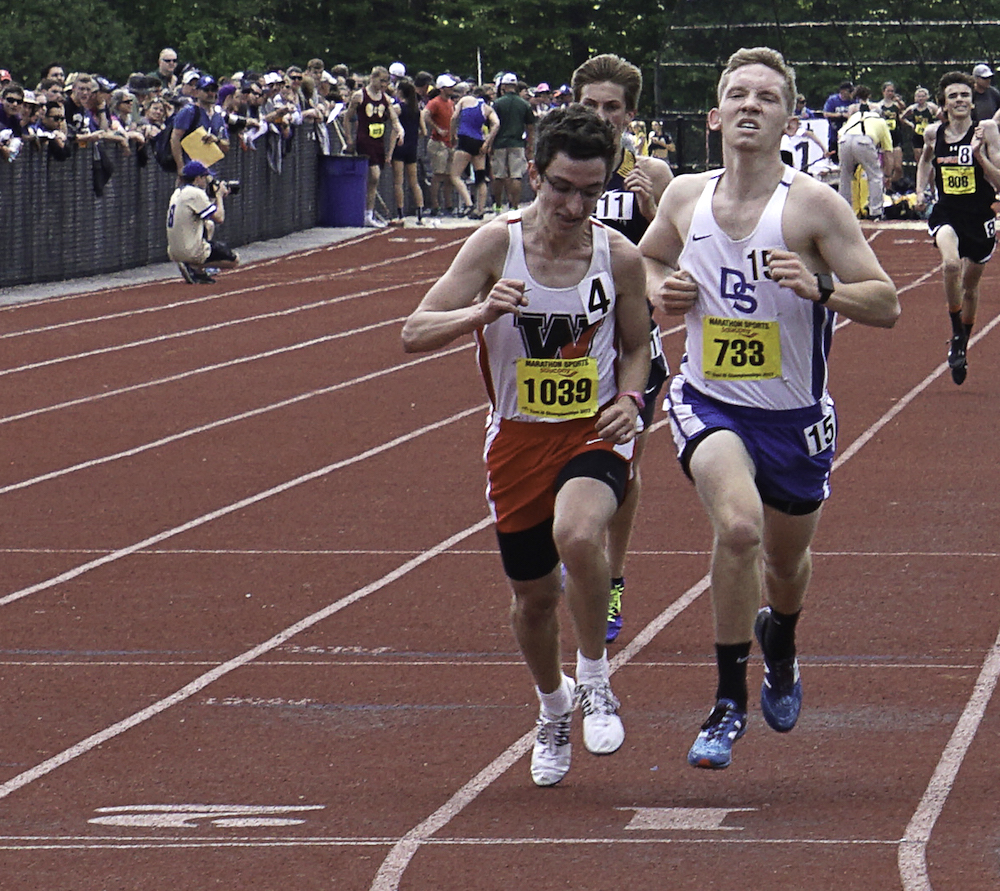 Senior James Piccirilli leaned in to grab a fourth place finish at Sunday’s Divisional Track Meet, and booked a place at All-States.

The weather did not cooperate with James Piccirilli during his 2 mile race. The senior prefers cooler weather, but he still finished high enough to make it to All-States.

After leading the pack of runners gunning for fourth place through the second to last lap Piccirilli was passed, but he fought his way back for a photo finish.

“I felt alright the first three-quarters (of the race). The last quarter those guys passed me,” said Piccirilli, who is headed to Cornell next year. “I kind of doubted I could pass them, I struggle with my kick.”

After re-passing the two runners ahead of him, Piccirilli needed a final lunge at the line to eek out a fourth place finish at 10:05.92, by just .06 ahead of Dover-Sherborn’s Peter Phelan. 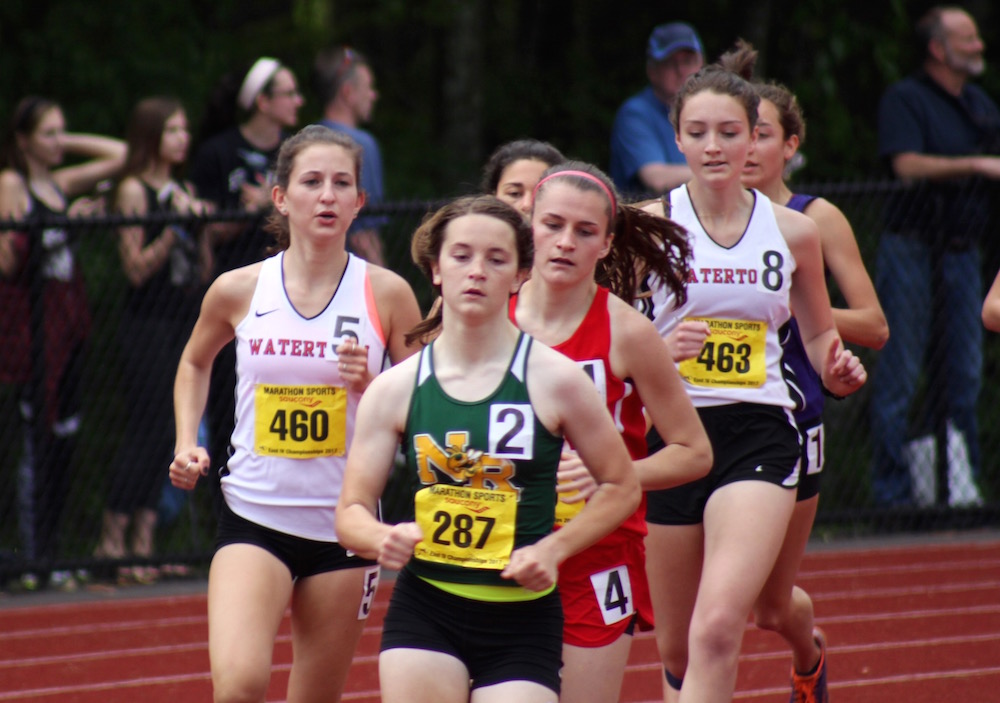 Watertown runners junior Emily Koufos, left, and junior Elizabeth Powderly, right, both placed in the points for the Raiders in the mile run at Sundays Div. 4 Emass meet.

Joining Piccirilli and Camara at All-State’s next week will be girls distance runner Emily Koufos, who also had a close finish.

A couple runners went out really fast in the mile run, but most of the rest of the competitors bunched up.

“I saw the girl from Old Rochester go out fast and I got confused,” Koufos said.

The junior was joined by teammate and training partner Elizabeth Powderly, a WHS junior, in the final.

“It was hard to find space most of the race, but in the last lap it kind of spread out,” Powderly said.

Koufos pulled away with a small group during the last lap and she out kicked Meredith Griffin of North Reading to take fourth place with a time 5:20.03. It was not her best time, but Powderly posted her personal record of 5:25.92, good enough for seventh place. 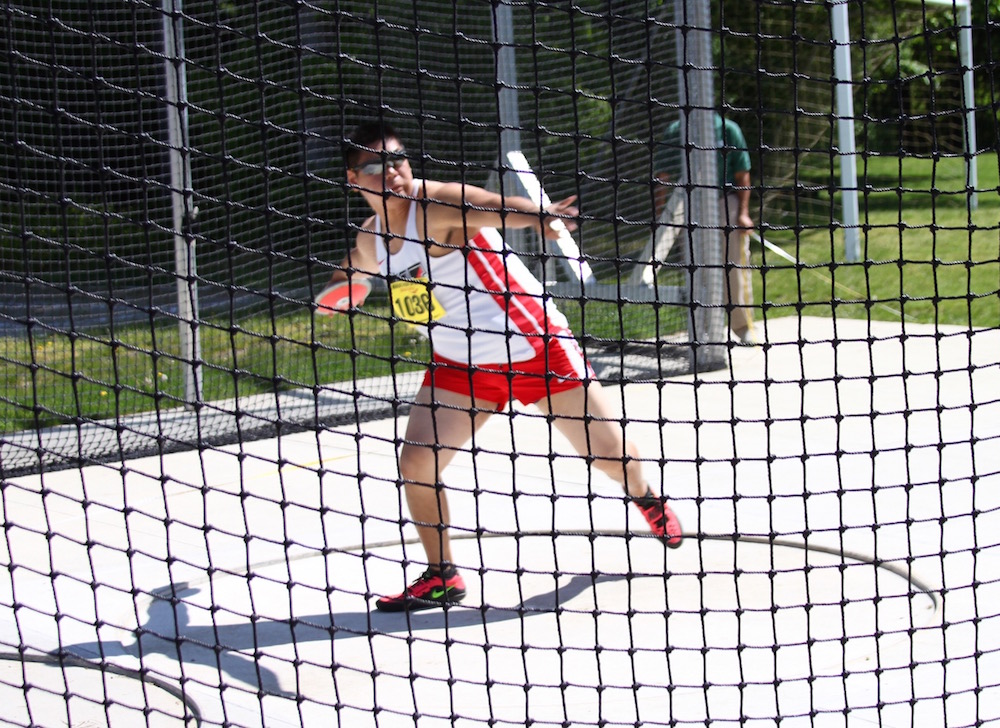 In just his second year throwing the discuss, Watertown junior Joe Chau not only made the divisional meet, but made the finals and claimed sixth place with a throw of 128 feet, six inches.

“There were a lot of good guys,” Chau said. “I was not nervous, not anxious. I kept calm.”

Chau is a multi-sport athlete, playing football in the spring and powerlifting in the winter.

The divisional meet started Thursday with the pentathlon, where Watertown junior Ben Landry finished 5th place with a total score of 2,419 points. Landry’s best finish in the five-event competition came in the shot put, where he had the second best throw. He also finished fourth in the 1500 meter run.

Other Raiders competing in individual events included senior Sam Carton (1oth in the 400), junior Anya Gellerman (16th in the 800), and sophomore Abigael Peters who competed in the high jump. Also, the girls 4×800 relay finished 10th. 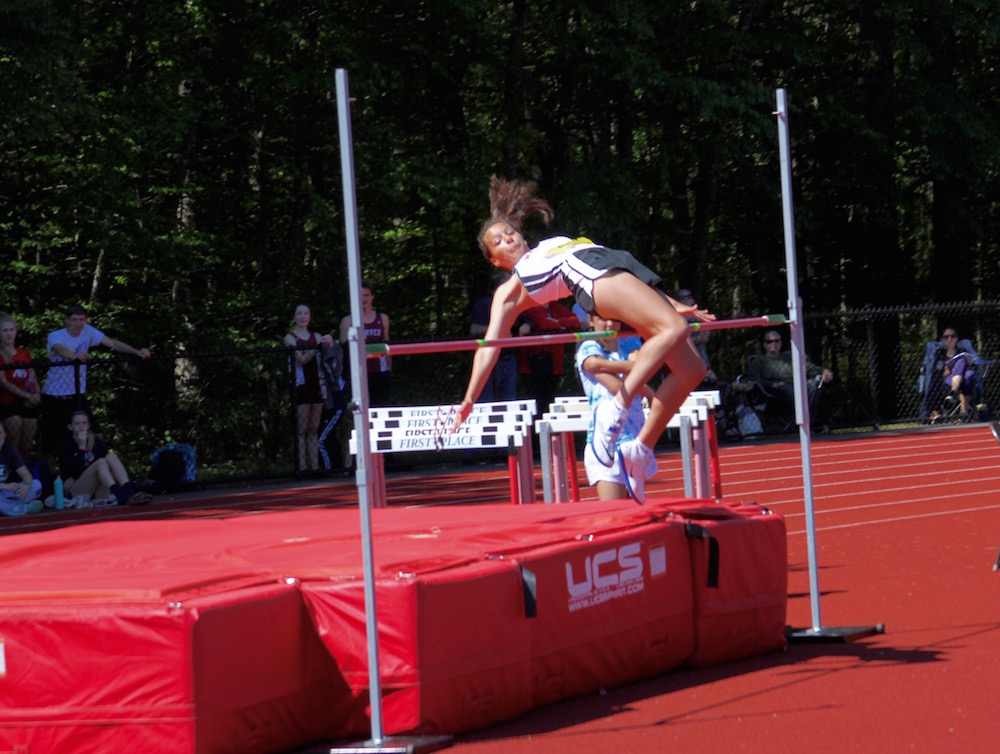 Watertown sophomore Abigael Peterson competed in the high jump at the divisional meet. 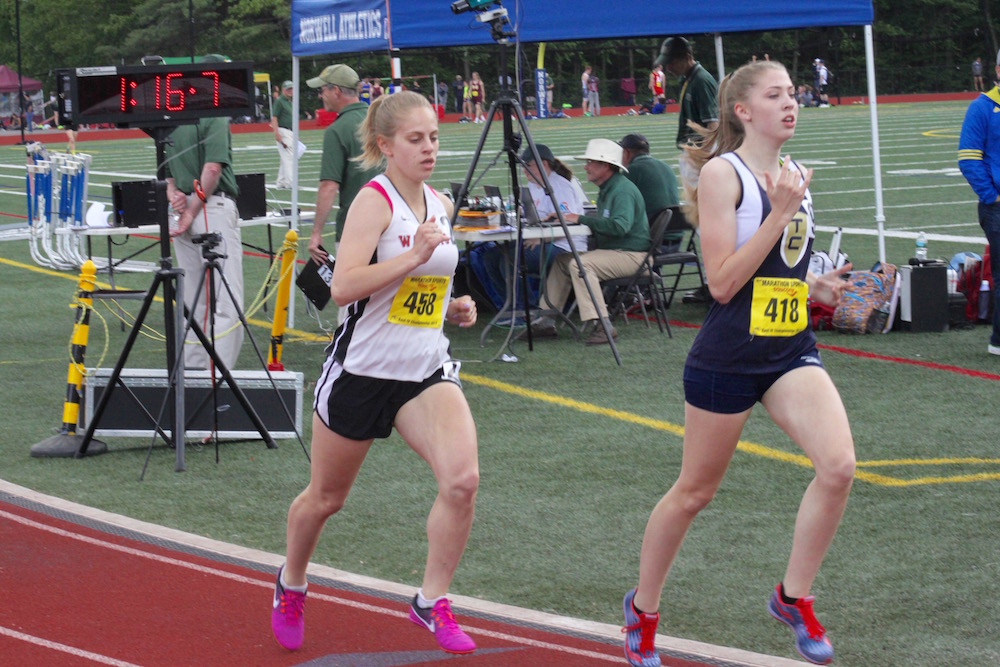 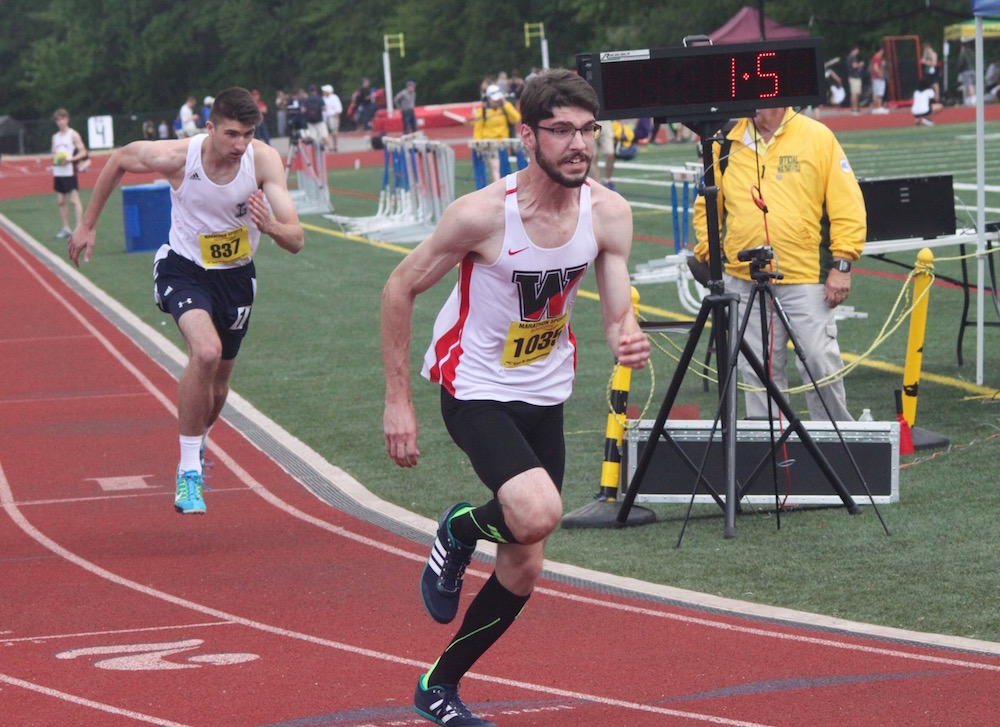 Senior Sam Carton powers off the start of the 400 in the Div. 4 EMass Track Meet on Sunday. 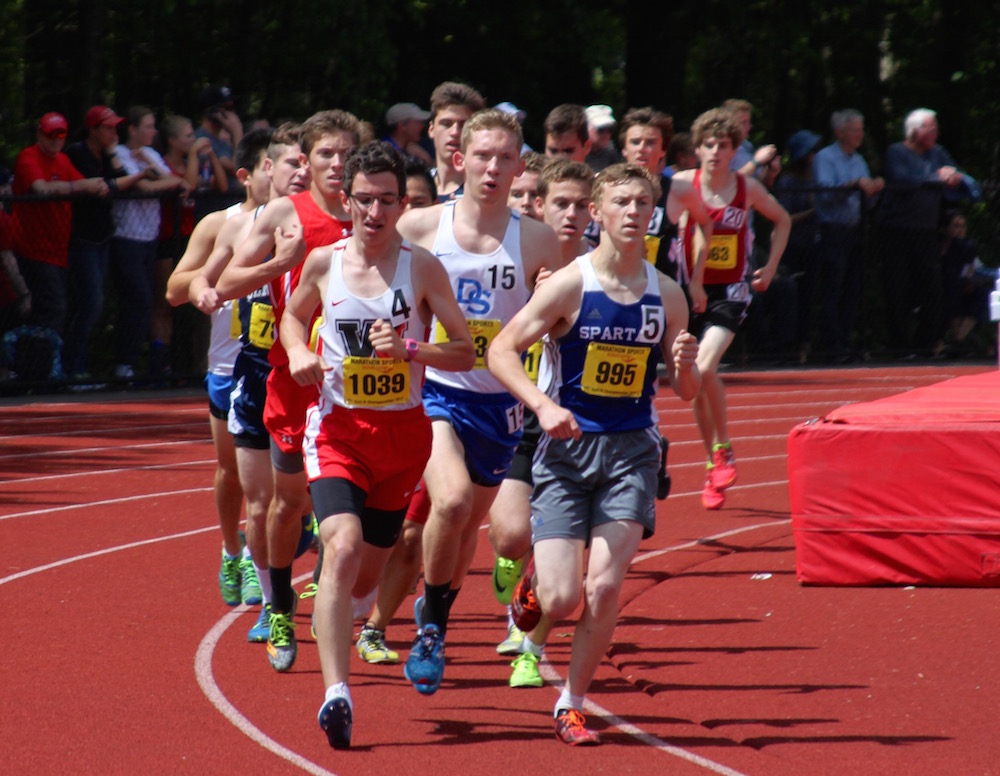 Watertown senior James Piccirilli leads the pack in the 2-mile run at the Div. 4 Track Championships.