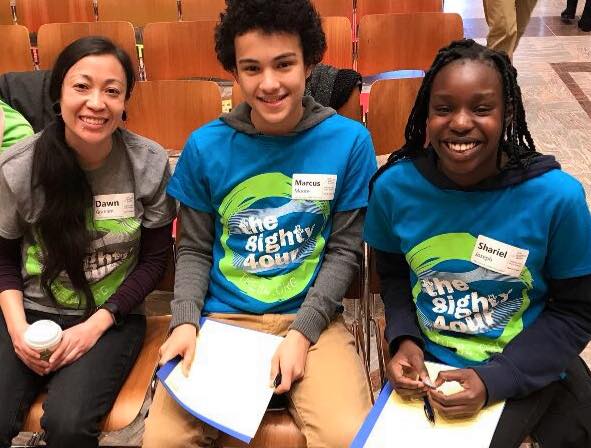 Watertown Youth Coalition Peer Leaders Marcus Moore, center, and Shariel Joseph, right, spoke to the Watertown Board of Health about their research about tobacco sales in town. They are shown with Dawn Graham, Media and Prevention Specialist with Wayside Multi-Service Center.

Watertown Youth Coalition Peer Leaders Marcus Moore, center, and Shariel Joseph, right, spoke to the Watertown Board of Health about their research about tobacco sales in town. They are shown with Dawn Graham, Media and Prevention Specialist with Wayside Multi-Service Center.

After hearing about research collected by some Watertown High School students, the Watertown Board of Health will look at possible changes to the town’s tobacco regulations.

The students are Watertown Youth Coalition Peer Leaders – a program of the Wayside Multi-Service Center – and also take part in a statewide movement of youth fighting tobacco in their communities, said Dawn Graham, media and prevention specialist with Wayside.

As part of the statewide anti-tobacco effort, called The 84 Movement, the students mapped where tobacco retailers are in town, and their proximity to schools, parks and places where teens hang out.

“They found that there are more tobacco retailers in Watertown than there are schools, parks, and other teen hangouts combined,” Graham said. “They were concerned to see that most places teens spend time – including Watertown High School – are less than a 5 minute walk away from a retailer and that there is currently no cap on the number of retailers that can be in Watertown.”

WYC Peer Leaders Shariel Joseph and Marcus Moore, both sophomores, spoke to the Board of Health in May about the mapping project and data from the most recent Watertown Youth Risk Behavior Survey. The survey found nearly a quarter of students had used an e-cigarette in the previous 30 days. Also, while more than half said they believe it is a great risk of harming themselves by smoking a pack or more of cigarettes a day, only 12.7 percent said it was a great risk if people were using e-cigarette or vapor products, Graham said.

The Board of Health also heard from D.J. Wilson, tobacco control director for the Mass. Municipal Association, Natalie Miller of the Brookline Tobacco Control Coalition and Lacina Onco of Health Resources in Action.

Board of Health members did not comment on the possible regulation changes, but Watertown Health Department Director Deborah Rosati said: “The Board has been considering more stringent stipulations to its Tobacco Control Regulations, and was pleased to receive valuable input from the Youth Peer Leaders regarding the accessibility of tobacco products. Their testimony validated the need for additional restrictions.”

One possible change would be capping the number of tobacco retailers in town, Rosati said. She said current holders of permits to sell tobacco will not be impacted, as long as they do not let the permit lapse. Under the current proposal, businesses seeking to sell tobacco at a time when the cap is reached can still apply, but if approved would be put on a waiting list for the next available permit.

Another possible change in the regulations would be banning new tobacco permits within 500 feet of a school, Rosati said.

In response to that, the Board of Health is considering having a mandatory minimum price of a single cigar of $2.50, Rosati said.

The third regulation being considered is banning sale of blunt wrappers in Watertown, Rosati said. These are wraps or hollow tubes made entirely or in part from tobacco and is filled by the buyer with loose tobacco or other fillers.