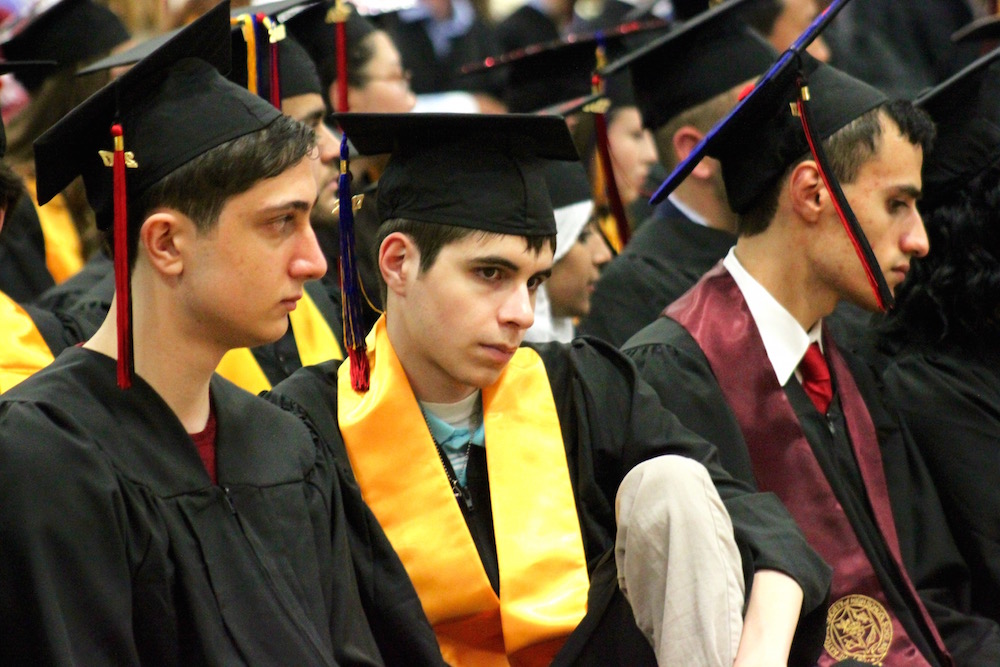 When the seniors at Watertown High School graduated on Friday, there was one graduate who overcame some major challenges to not only finish high school but do so with honors.

Rosdom Kaligian has severe dyslexia and also is autistic. His parents considered placing him in an out-of-district special education program, his mother Barbara Aghamianz said, but he convinced them to keep him at WHS.

“I think people forget how hard it is for these kids to graduate, let alone be successful.” Barbara said.

As a student with an Individual Education Plan (IEP) Rosdom would have team meetings to track his progress. He described this in an award winning essay about “To Kill a Mockingbird,” in which he writes about Atticus Finch’s words to his daughter Scout that: “You never understand a person until you consider things from his point of view … until you climb into his skin and walk around in it.”

He had a team of people working with him, including and aide, a social worker, a reading specialist, a technology specialist, with whom he would meet along with his teachers and parents. He describes sitting in the meetings, listening to the group talk about his progress.

“As I sat there I wondered how my team would feel If they had to climb into my skin and “walk around in it” — Would all these experts be able to overcome all these obstacles to get an education?” he wrote.

Rosdom did not start reading until he was 11, and his dyslexia was not yet diagnosed, he wrote.

At the high school he received help from a lot of people, and from some technology that helped him take in the lessons and do his assignments, said Mike Boyd, an instructional support staff member in the special education department.

For two years, Boyd would attend every class with Rosdom to help him out. He also did a lot of research to find tools that could help Rosdom, including computer programs. One of the key technologies was a speech-to-text/text-to-speech program offered by Google which assisted Rosdom in class.

“There is amazing technology that helps students who struggle really be successful,” Rosdom said. “It allows them to get the material and get a feel for it. Rosdom is a perfect example.”

The technology would record the lesson for him, take notes, and he could take assigned questions and dictate the answer back into the computer, Boyd said.

One of the challenges for the staff is is doing this with little funding, Boyd said. Because WHS is a Google School students and staff have access to some free programs, such as the ones Rosdom used.

Another program helps students organize their assignments, something Boyd said he believes can be useful for many high school students.

Rosdom did well in school, and found some subjects which he has a talent for, Boyd said.

“In the areas of chemistry and math he excels on his own,” Boyd said. “He was honors in math for four years and was a top chemistry student.”

Boyd said he is just one of many people who have helped Rosdom during his time at Watertown High School. They are not just in special education, but also from the library, and classroom teachers who gave extra time.

His experience at WHS was not just about classes. Rosdom also started the Comic, Graphic Novel and Animation Club.

“It’s a social club for students interested in Japanese animation and comics,” said Boyd, who is the club advisor.

He also made a PSA to help students with disabilities and their parents who may be struggling with the diagnosis. (View it here).

His mother Barbara said that she hopes Rosdom is a source of inspiration for other students and parents facing such challenges.

“It has been a long, painful, and somewhat joyful journey through the public school system and I think students and parents need to see the light at the end of the tunnel,” she said.

Rosdom  was accepted to multiple colleges and was able to figure out which was the best fit. Next fall, he will be heading to Hampshire College to study computer science. And, he will be able to take the technology he used at WHS to him with college, Boyd said.

“He made it past every obstacle he faced,” Boyd said. “We are really proud of him.”