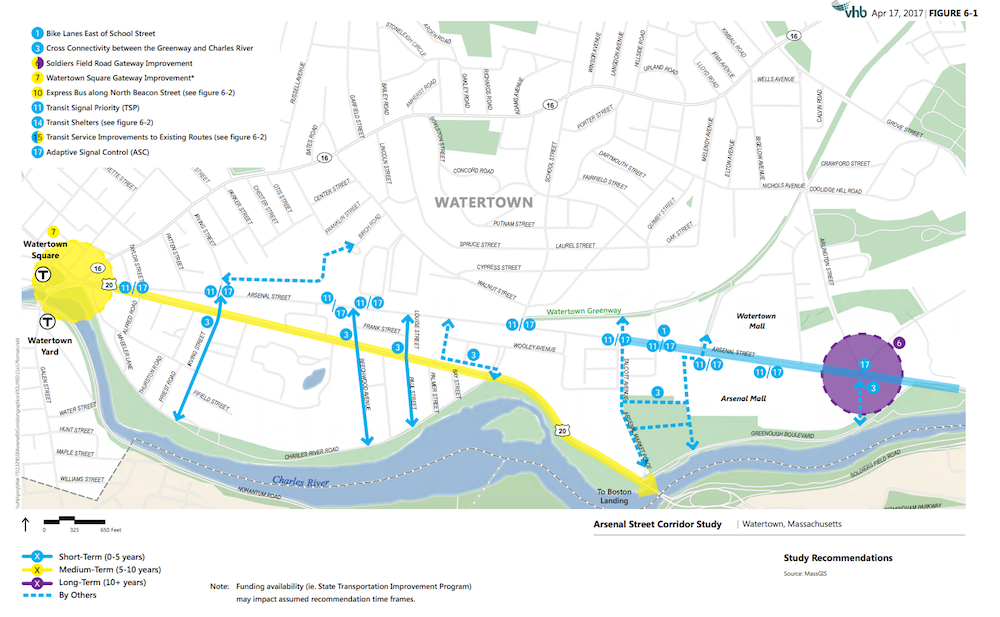 The Massachusetts Department of Transportation has released a draft of the report and recommendations for improving the Arsenal Street Corridor, and officials will host a meeting later in June to discuss the report with the public.

The report made for MassDOT by consultants from VHB, includes improvements to vehicular, transit, bicycle, and pedestrian uses of the corridor, “with a targeted focus on enhancements to bus service along Arsenal Street and locations where the bus service ties into other crossing bus routes,” according to the MassDOT announcement. Click here to see the draft Final Report.

In the draft final report, MassDOT officials write that the recommendations would require “a significant investment in potential transportation-related infrastructure.”

“These projects represent an investment in total that currently far exceeds available funding as presently programmed. The advancement of the recommendations developed as part of this study will require prioritization by (and coordination between) the Town of Watertown, MBTA, MassDOT, and other stakeholders to address current fiscal constraints as related to transportation improvements,” the draft report reads.

The recommendations listed in the report (with cost estimate):

Most of the improvements are proposed to be funded by a mix of state government, local government and private developers. While the improvements to the T service would be paid by the MBTA, a shuttle down North Beacon Street would include a mix of money from the MBTA, members of the Watertown Transportation Management Association (TMA), and other “area stakeholders.”

Improvements to the two main gateways for Arsenal Street – Watertown Square and Soldier’s Field Road – would be paid for with a mix of town funds, developer funds and state transportation funding.

The bike path along Arsenal Street east of School Street could be paid for by a mix of state funds (Chapter 90 and Safe Streets) and developer funds. Because of the width of the road, the bike lanes would not be able to be five feet wide the whole length without making lanes of traffic less than 11 feet wide.

The time frame also varies. Some improvements to the 70/70A bust could take place within 5 years (such as breaking off the 70A loop north of Main Street into its own route), but the study estimates adding new equipment may take up to a decade. Bicycle lanes and bus shelters would be on the short term (2-3 years), but the Soldier’s Field Road and North Beacon Street Shuttle on the long term end (10 years or more). The shuttle could get started as a pilot in about five years, according to the report.

For more information about the Arsenal Street Corridor Study, click here www.mass.gov/massdot/arsenalstreet. Comments on the report will be accepted through July 5, 2017, and can be sent to Michael Clark, MassDOT Office of Transportation Planning, Attn: Arsenal Street Corridor Study, 10 Park Plaza, Suite #4150, Boston, MA 02116, or emailed to michael.clark@state.ma.us