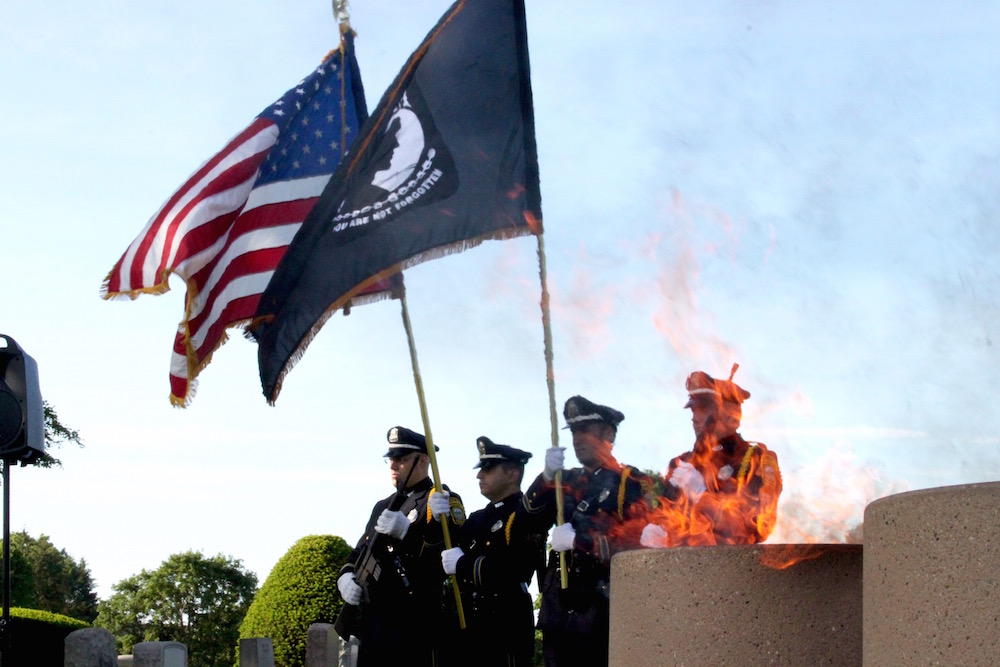 The Watertown Police Honor Guard present the colors while worn flags are retired by burning them in a retirement ceremony organized by Watertown's veterans groups. 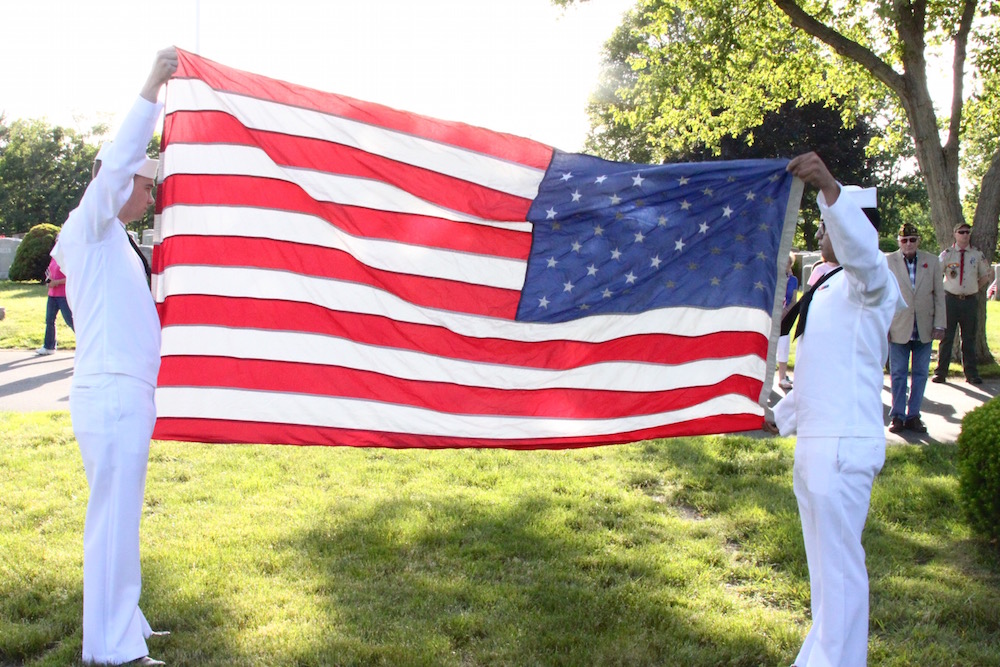 Sailors from the U.S.S. Constitution prepare to fold the flag during the Flag Retirement Ceremony at Ridgelawn Cemetery.

The flag that flew in front of Watertown Town Hall got a retirement with the full honors Wednesday evening.

For the first time in memory, the Town of Watertown held a flag retirement ceremony on Flag Day. Local veterans groups, the Watertown Police Honor Guard, and sailors from the U.S.S. Constitution all took part in the ceremony at Ridgelawn Cemetery.

The ceremony was lead by Watertown Veterans Agent Mark Comeiro.

“When a flag has serve its useful life, it should be retired,” Comeiro said. 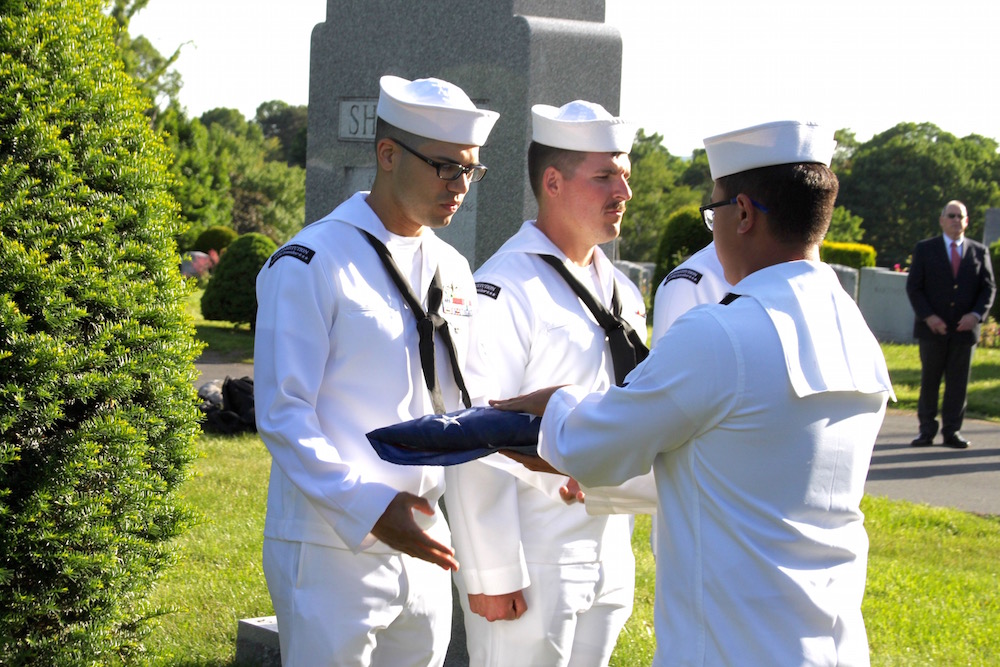 The folded flag is presented to the sailor who will place it into the container for incineration.

The flag flew on the pole in front of Town Hall until Memorial Day, Comeiro said. On Wednesday, two of the sailors from the Constitution folded the banner up into a triangle with only the field of blue an starts showing. Then it was handed to two other sailors who placed it into a one of two large cement cylinders that held other flags. Finally they were lit while Taps was played.

Ed Aucoin, a member of the Shutt Detachment, said he though the ceremony went well. Properly retiring the flag is important, he said.

“It is so important to retire these flags with respect to remind the country that you don’t just throw the flag away,” Aucoin said. “If not, it is disrespectful. It is a disgrace.”

The Watertown Police Honor Guard present the colors while worn flags are retired by burning them in a retirement ceremony organized by Watertown’s veterans groups.

The idea for the ceremony came from one of the regular meetings Comeiro has with local veterans groups.

“We said it would be a nice thing to do on Flag Day,” Comeiro said.

“The American flag is the most displayed and recognized banner in the world. These flags serve as constant reminders to all of us that we live in a country where our freedom has been deeply purchased by blood, sweat, tears and ultimate sacrifice,” Comeiro said during the ceremony. “We must not forsake what those in the service to this flag, and their families, have forfeited.” 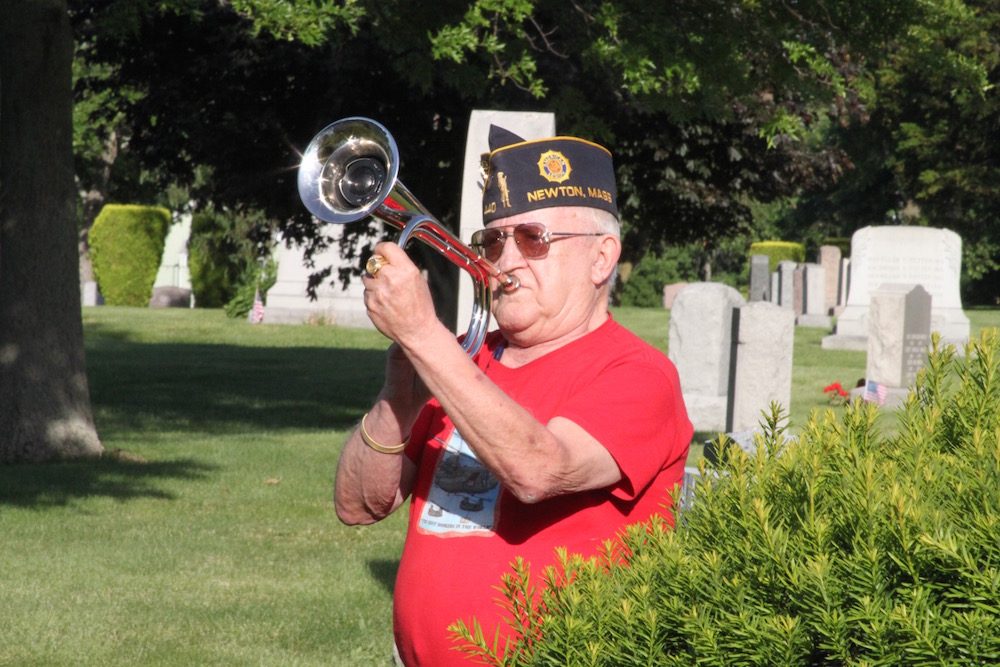 Gordon Brown, a member of the American Legion Post 440 in Nonantum and the Veterans of Foreign Wars brought his bugle for the ceremony.

“It was the first time we have done it,” Brown said. “It worked it worked OK.”

Aucoin was even more enthusiastic.