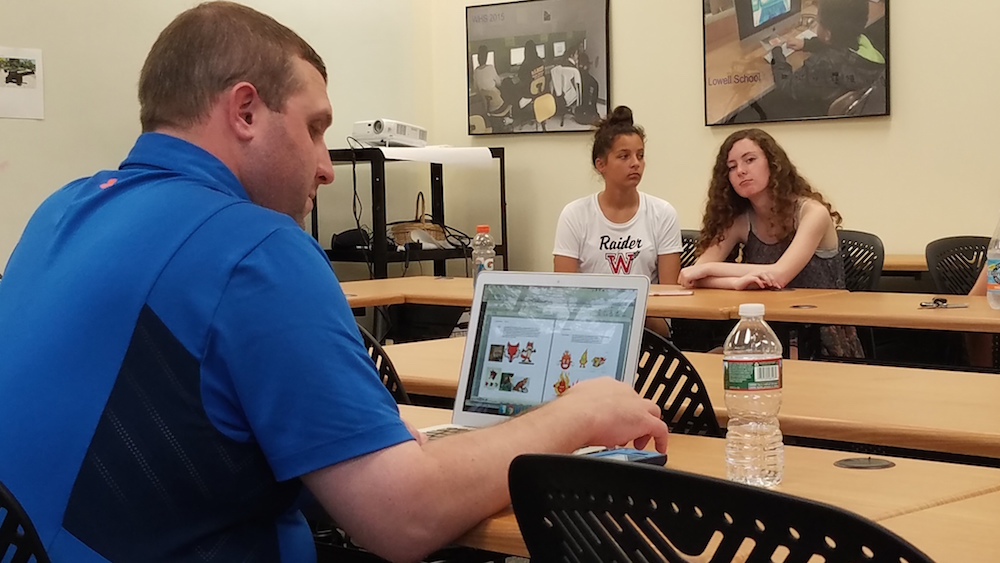 Watertown High School television production teacher Todd Robbins looks at some of the proposals for WHS's new mascot during the Mascot Screening Committee meeting. Across the table are WHS students and committee members Abbie Peterson, left, and Emma McGoldrick.

Watertown High School television production teacher Todd Robbins looks at some of the proposals for WHS’s new mascot during the Mascot Screening Committee meeting. Across the table are WHS students and committee members Abbie Peterson, left, and Emma McGoldrick.

Knights, Colonists, American Indians, foxes, bobcats, and many more – these are some of the choices that the Watertown High School Mascot Screening Committee has to choose from for the school’s new logo.

The group of students, alumni, parents and school staff met Tuesday night to review the 17 submissions for the new WHS mascot/logo, and shortened the list for the graphic designer working with the group to have some ideas.

The submissions came from students and others in town, said School Committee Vice Chair Kendra Foley, who is chairing the Mascot Screening Committee. One even came from a fifth grader.

The group was asked what characteristics they wanted the mascot to have.

One of the students on the committee, Abbie Peterson, said she wanted to show that Watertown is “a strong community, we don’t let anything hold us back and we strive to be the best.”

Several people said they wanted to have something that showed strength and courage, but they also liked the idea that it was something welcoming, too.

WHS Alum and owner of Graphics Connection Paul DerBogosian said that he wanted to make sure the logo was something that not only worked for sports teams but also for groups in drama, art and other areas.

Another goal was to have the mascot not be offensive to people.

This brought up the subject of having an American Indian as the symbol of the school. Some wanted to see that be one of the options, since it has traditionally been the WHS mascot. Having the cartoonish, dancing Indian as a logo at WHS and for booster groups has raised some controversy, but some thought it would be OK to have a more realistic looking Indian.

Foley brought up the fact that there is a bill in the Massachusetts State Legislature that would ban Native American mascots for schools. While Native American groups have mixed opinions over whether they support having mascots with Indian names and images, Foley said that one thing she has read is that there they do not like being associated with certain names, including Raiders.

“Connecting Native Americans to a Raider is incorrect historically,” Foley said. “The Europeans came in and raided.”

Because of the negative association with the Raider name – which will continue to be the WHS nickname – and the pending legislation, Foley said she did not think a Native American logo should be proposed as a finalist.

Looking at the other options, the group wanted something that fit with the Raider name, and also could be something that someone could dress up as at games. The later criteria eliminated options such as a flame and a stand alone shield or logo.

A number of animals were proposed, and some did not seem to work because they have no association with Watertown, such as a rhino or a horse. Squirrel did not inspire people on the committee and they did not like birds such as hawks, falcons or eagles.

Some are close to other teams in the area, such as a bobcat which is Wilmington’s mascot, and Burlington is considering becoming the Bobcats, also a spartan helmet would look like the Stoneham mascot.

A Patriot or colonist was considered, but the group agreed the did not want a logo with any sort of weapon, so a minuteman type logo would not work. WHS television production teacher Todd Robbins said Colgate University changed from an Indian to a colonist and he likes their logo. The colonist in the logo does not have a gun but does have a torch (click here to see).

The group put together three proposals to create on image they liked – knight holding a shield and riding a horse. The proposed shield had an R on it and a lightning bolt, but student Nathan Follett said he worried people would think it was for Reading. The group agreed they would want a W on the shield.

A red fox works with the school colors of red, black and white, and it is also an animal native to Watertown. It could also be something that people could dress up as. This was another of the finalists.

They also liked “some sort of wolf, bobcat or animal” Foley said.

The finalists will be chosen at the Mascot Screening Committee’s next meeting on Tuesday, June 20 at 7 p.m. on the third floor of the Phillips Building, 30 Common Street. The meeting is open to the public.

Foley said there will be public input taken when the School Committee discusses the mascot choices.