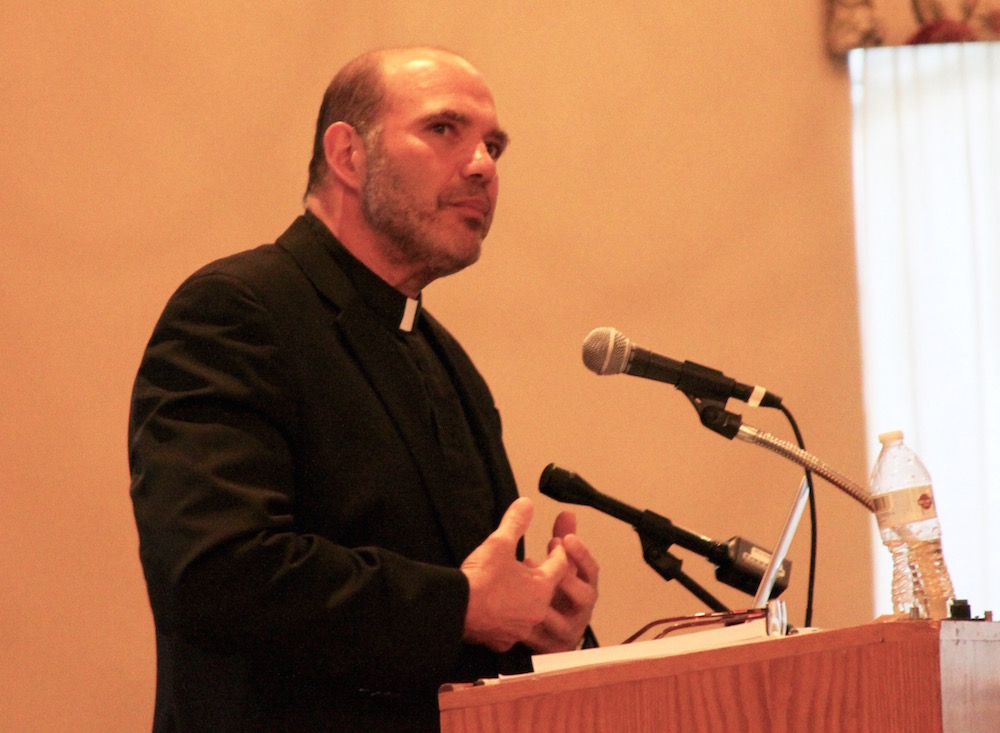 Rev. Dimitrios Moraitis said that an important part of recovery for addicts is spirituality. 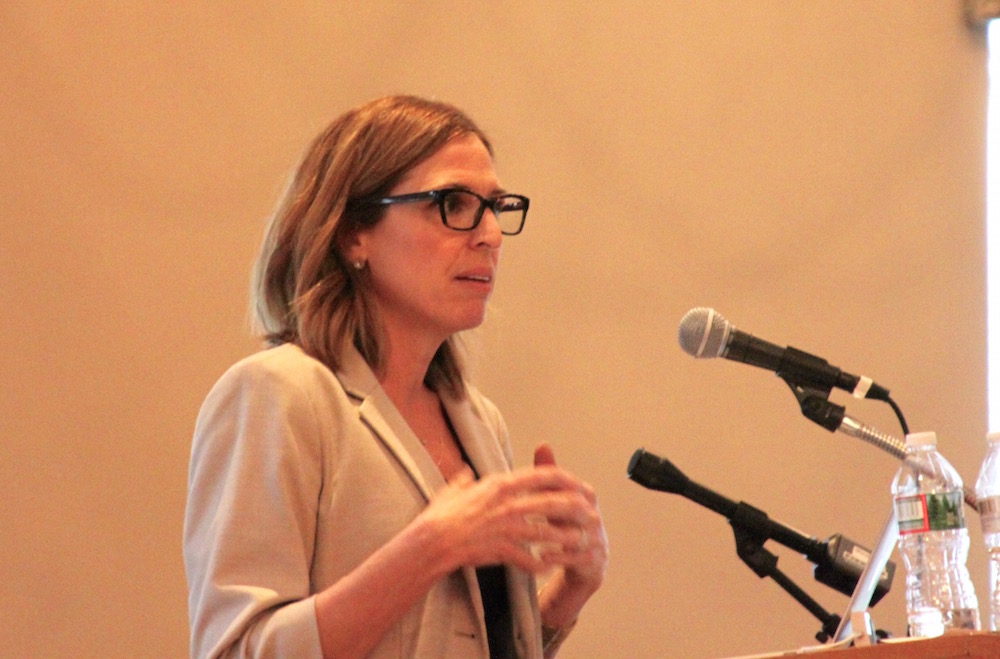 Dr. Laura Kehoe spoke about the impact of drugs on people’s brains during an event to raise awareness of the opioid epidemic.

Beating addiction to opioids and heroin can be a very difficult road, but the message of speakers at the WATERtown Task Force on Substance Use Disorder is that you have to keep fighting and overcome the relapses to reach recovery.

The epidemic of opioids in Watertown continues to be a problem, despite a decrease in the number of overdose deaths this year, said Watertown Police Lt. Dan Unsworth, said at the event hosted by the Taxiarchae-Archagels Greek Orthodox Church in Watertown.

“(The drop) is likely due to the good work of the detectives of the WPD and first responders having Narcan,” Unsworth said.

The anti-overdose drug works by displacing the opioids in the brain that have stopped the person’s breathing, said Dr. Laura Kehoe, who specializes in substance use at Mass. General Hospital. The effect, however, is temporary, said Watertown Fire Capt. Ryan Nicholson, who gave demonstrations of how to use Narcan before the speakers.

“Even if they get Narcan they still need to go to the hospital,” Nicholson said. “Sometimes we have to give a couple doses of Narcan on the way to the hospital.”

People can get vouchers for free Narcan from Walgreens on Main Street in Waltham by going to Social Services Resource Specialist Danielle DeMoss (617-744-9585) of from the Watertown Police Department’s Clinician (617-972-6500).

Rev. Dimitrios Moraitis said that an important part of recovery for addicts is spirituality.

When someone who overdoses is taken to the hospital, they may be lucky enough to get into a treatment program. The typical length of a these programs is 28 days, said Rev. Dimitrios Moraitis of the Greek Orthodox Church (who also trained as a drug and alcohol counselor), but not because that is the time it takes to beat an addiction but the amount that would be paid for by insurance. These days that may be shorter.

In her work, Kehoe said, she has to overcome people’s perception of addiction, even among fellow doctors.

“It is one disease that is largely predicated on people’s beliefs rather than scientific evidence,” Kehoe said.

An opioid user’s brain chemistry changes so much that the use is not by choice, but just to stop from feeling sick, Kehoe said. It takes a year to get the brain back to the way it was before, she said.

While overcoming an addiction has a medical component and requires changes in brain chemistry, Moraitis said there is also a spiritual component.

“There is certainly a disconnect from God,” Moraitis said. “Alcohol and drugs are often the symptom of a problem in a person. We talk about the void left in the heart that is meant to be filled with God.”

Treatment can take a long time, and most people who reached recovery failed along the way, multiple times.

“When we asked people how many times they tried treatment before the recovered they say three or four times,” Moraitis said.

To get to recovery people need support from their family, but that sometimes means doing things that are counterintuitive for parents and family members. One thing they do is enable them to continue using drugs without paying the consequences, or enabling.

“It could be as little as calling their boss to make an excuse or as harsh as not changing the locks (on the house),” Moraitis said. “If you tell them this is the last time you do drugs or else, but then don’t follow through then you are enabling.” 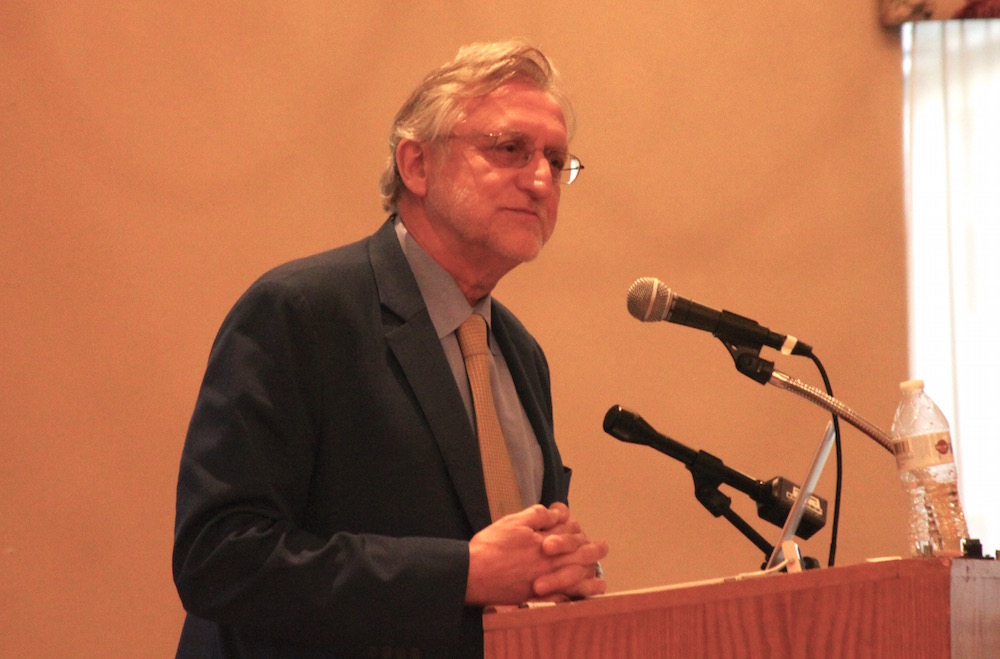 Dr. Theoharis Theoharides attends the Greek Orthodox Church in Watertown and is studies the effect of drugs on the brain.

Moraitis added that families also suffer through the substance use, and they benefit from some counseling, too.

“The whole family becomes sick,” Moraitis said. “When one person is addicted you wonder: Is he going to show up? Will she leave her kids behind? Will he come one tonight?”

Dr. Theoharis Theoharides attends the Watertown Greek Church, and also researches the effects of substances on the brain at Tufts University, including opioids. He also was appointed the Governor’s Commonwealth of Massachusetts Opioid Drug Formulary Commission. Certain things make people more at risk for becoming addicted, he said, including stress.

“Being under stress changes the brain in distinct ways. It opens up certain areas dealing with behavior,” Theoharides said. “We talk about keys and locks and with stress there are more locks for the keys to fit. The more stress the more likely a person is to become an addict.”

He said there is a movement in the state to push for medications that have the same pain relief as drugs like oxycontin but that cannot be crushed and snorted or injected to make them more potent. The state committee he is on is looking for these drugs, and when available pharmacists will automatically replace the addictive ones with those that cannot be snorted or injected.

The mandate from Gov. Charlie Baker said that even if the replacement drug costs more, Theoharides said, the difference will be made up so that the consumer won’t have to pay more.

For more information about the WATERtown Task Force on Substance Use Disorder and about resources available in town, click here: www.watertown-cares.com