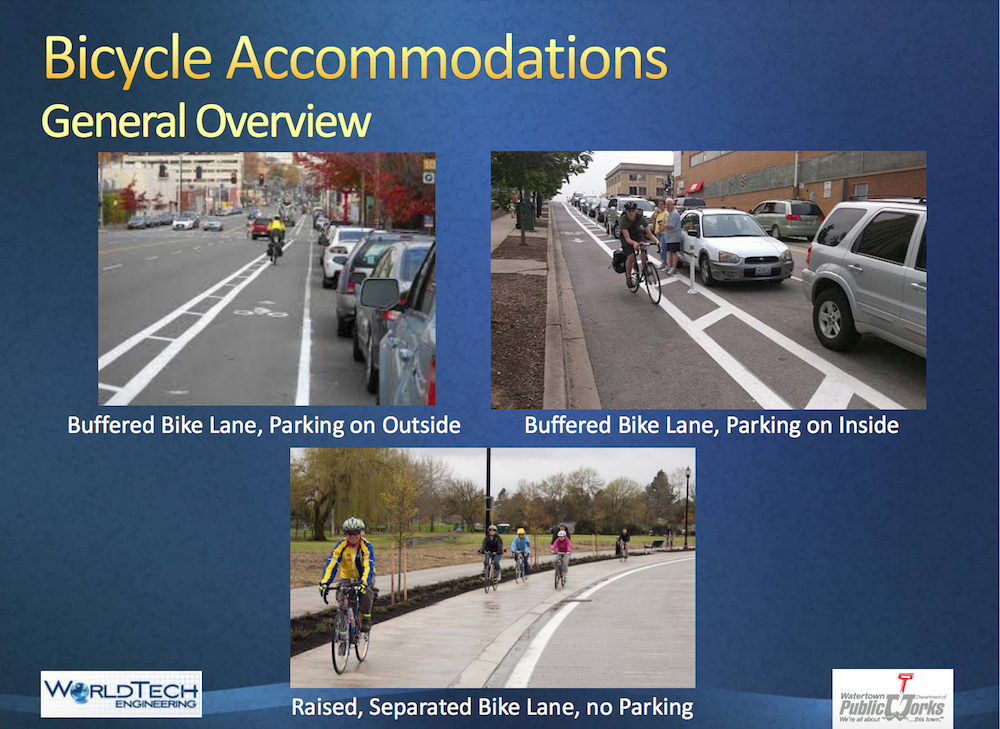 Options for bicycle lanes that may be used in the Mount Auburn Street renovation.

Options for bicycle lanes that may be used in the Mount Auburn Street renovation.

The long-in-the-planning Mount Auburn Street renovation is taking shape, and Monday night plans for adding wider bike lanes to the major artery were shown to a packed meeting at Town Hall.

The meeting brought together the Town Council’s Public Works subcommittee and the Bicycle and Pedestrian Committee. It came about after a meeting in December 2016 during which residents brought up concerns that the safety of bicyclists were not being included in the planning for Mt. Auburn Street.

Talks about the renovation of the road, which goes from Watertown Square through East Watertown to Cambridge, began several years ago. The project is a Complete Streets project, which means it not only includes motor vehicle traffic, but also accommodates bicycles, pedestrians and public transportation. In 2007 there was a study for improving Coolidge Square, and the renovation of the length of the Roadway from Patten Street (near Starbucks) to the Cambridge line was added to the project along the way.

Kris Surette, from the town’s consultant WorldTech Engineering, said that the project is a few years away from reality and right now officials are shooting for construction in Fiscal Year 2022.

The plans discussed Monday night would include protected bicycle lanes on each side of the roadway. In addition, the number of lanes of traffic would be reduced from four (two each way) to two, with turning lanes at intersections with large amount of left turns.

Andrew Campagna of the Bicycle and Pedestrian Committee, said it would be good to have data about how much traffic can be handled with two lanes vs. four lanes. Michael Pompili of WorldTech said that the new design includes turn lanes and improved traffic lights that will allow it to handle the traffic. (Statistics can be found in this study).

On-street parking is allowed on the south side of Mt. Auburn Street from Patten Street to Arlington Street but there is no parking on the north side. There is parking allowed on both sides in Coolidge Square, and that will continue. Officials are considering whether to allow parking on the north side of Mt. Auburn Street from Arlington Street to Cambridge. Right now it is not allowed.

A protected bicycle lane can come in a number of forms:

The third option, a raised and separated bike lane, is considered the safest for bicyclists. Engineers looked at having one on each side, or having two lanes (one each direction) on the same side of the road, Surette said, but there is not enough room. They plan to keep the same overall width of the road – 56 feet – with 11 foot wide lanes of traffic, 10 foot wide turning lanes and 6.5 foot wide bicycle lanes.

The recommendation for Patten Street to Coolidge Square is to see if a separated, raised bike lane would work on the Northside (toward Watertown Square), and a buffered bike lane on the roadway on the Southside (toward Cambridge) with the bike lane located in between the parked cars and the travel lane.

The area from Arlington Street to Cambridge is still being studied, Surrete said, but there could be more protected bike lanes for that section.

“We could provide separated (and raised) facilities on  both side of the road,” Surrete said. “There is a little more right of way there.”

Members of the Bicycle and Pedestrian Committee said they prefer either sidewalk-level bike lanes, or having it separated from traffic by the parking lane.

“Not many people use the (bike lanes on Mt. Auburn Street) now,” said Bicycle and Pedestrian Committee member Sam Scoppettone. “Why don’t they? Because it is so dangerous.”

Scoppottone said research shows that if in areas with unprotected bike lanes, only about 7 percent of cyclists use bike lanes, while 60 percent use a bike lane if it is protected from traffic.

Bicycle and Pedestrian Committee member Maria Saiz said if there the bike lane is beside the lane of traffic there should be some sort of barrier, such as plastic poles or bollards, to separate bicyclists from vehicles.

Some worried about what the new design would mean for Coolidge Square. Resident Deb Peterson recalled the discussion of redesigning began in 2007, and she thinks more input is needed from residents and business in that area.

Tyke Patiquin, whose family has owned Cass the Florist for 76 years, said she worries about parking being reduced in the area.

“I think the committee is ignoring that there are some businesses that people will not ride their bike to – funeral homes, buying flowers, going to a medical appointment,” Patiquin said. “Parking is paramount to small businesses in Watertown.”

Watertown Town Engineer Matt Shuman said there is no plan to remove parking in the Coolidge Square business district.

Others wondered about how delivery trucks will be accommodated, because they could interfere with bike lanes. Bicycle and Pedestrian Committee member Jesse Hammond said he has lived in places that allowed trucks to unload in turning lanes and wondered if that was an option.

Input will be gathered for the next couple weeks, and comments and questions can be submitted here: mountauburnstreet.com/stay-in-touch/. You can also sign up to receive email updates on the project on that page.

Information about the project, including the slides from Monday’s presentation can be found on the Mount Auburn Street Project website, mountauburnstreet.com

{This story was updated at 5:39 p.m. on June 20. It incorrectly said parking was allowed on the north side of Mt. Auburn Street from Patten Street to Coolidge Square.}