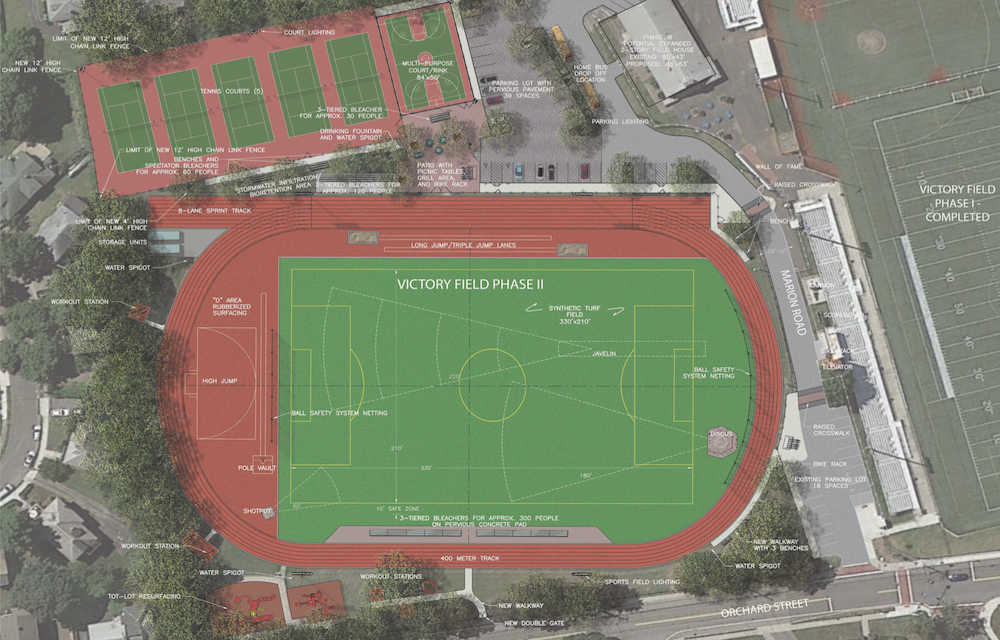 The design for the track and courts area at Victory Field.

The proposed design for the track and courts area at Victory Field.

Plans to rehabilitate and renovate the track area at Victory Field began to take shape Tuesday night, but members of the Committee making recommendations about the project had trouble agreeing on some aspects of the project.

The Ad Hoc Committee on Victory Field Phase II is made up of town officials, neighbors of the site and representatives of groups who use the site – the Watertown Public Schools and Watertown youth sports. The disagreements rose from the balance of the how much the use of the track and court areas should be athletics vs. being a public park and recreation area.

What arose as an area of contention was something not for track and field, but a net to protect people from balls thrown or kicked by teams using the grass area inside the track.

The proposed nets would be about 20 feet tall and would stretch behind the goal area on side of the track closest to homes and around the entire curve on the side closest to the driveway and football field. They would be similar to the nets along Orchard Street on the football field.

Resident Elodia Thomas said she believes the area is losing its appeal as a park and the nets make it feel even more like an athletic facility.

“Many people do not want the netting. It is pushing the sports complex, but it is a public park,” Thomas said. “It is both an aesthetic issue and it starts to close off the field.”

The netting could be put up and taken down when not being used, but the poles would remain. The plans show six poles on one side and 10 on the other.

The group wondered if the net was really needed since the field has been used for sports like soccer and lacrosse for years. Some people who used the track for walking while teams use the field say they understand that they must be aware of flying balls.

“Not only is it a legal issue, but if someone was hurt I would feel just awful,” Centola said.

Mark Leonard, president of Watertown Youth Soccer, said he thinks it could be a place to compromise.

“It doesn’t feel like there has been a lot of give and take,” Leonard said. “If I am a an abutter I am not sure if it serves a purpose.”

Thomas wondered if people could be asked to not walk on the track when a lacrosse game is going on, that way the nets would not be needed. WHS Athletic Director Michael Lahiff said that the track team has problems keeping people off the track during track meets, so he does not think it is possible during a lacrosse or soccer game. Centola added that the most balls are flying around during drills at practice.

Others wondered if flying balls were a concern, why the netting did not go around the whole track. Assistant Town Manager Steve Magoon said that when players are shooting they are firing the ball at full speed, but when they pass in the middle of the field they do not throw with their full strength.

The group did not take a vote on the netting. Town Councilor Vincent Piccirilli, who is chairman of the Victory Field Committee, said that if the group can not reach a consensus then a vote will be taken and the majority will decide what the committee’s recommendation will be regarding the netting.

The group agreed that the current track area needs work.

“This is a much needed update. The track is really worn down,” Lahiff said.

Centola noted that as far back as 2006 there was a study saying the track needed replacing.

“If you look at it is a concern of safety,” Centola said. “The long jump sand pit is in really bad shape and is a borderline safety issue.”

The basis for the debate is the design made by CDM Smith in 2015, with one major exception. The area inside the track will be replaced with natural grass, not artificial turf, Piccirilli said. Objections to the artificial turf stalled the first attempt to renovate the area two years ago.

Changes agreed to Tuesday night include replacing the track, and adding two lanes (going from six to eight) for in the sprint area, which lies closest to the tennis courts. The rest of the track would stay at six lanes.

Lahiff said this would allow more athletes to compete in meets, and WHS Track Coach Tom Wittenhagen (who is not on the committee but was asked for his input) said that will be helpful because right now the area is crowded during practices with sprinters, hurdlers, runners practicing relay baton passing and middle school students all trying to workout.

The Committee also agreed to add more rubberized surfaces around the long jump/triple jump area (just below the sprint lanes) and to create a “D” on the curve of the track closest on the far side of the track from the football field. This area would be for high jump and pole vault.

In the past there was a pole vault area at Victory Field on the side closest to Orchard Street, but that now has bleachers bolted on top of them.

The fact that parts of the grassy area would be lost bothered some residents.

“It is a good thing to keep the field grass and not artificial turf,” said resident Ashok Modak. “I would like the field not to be reduced to the size of a postage stamp. It is a recreation area that is important to the community.”

Howard did not know exactly how much grass would be lost in the new configuration, but the area would be big enough to play high school soccer. He was asked to come back with information about that.

The group struggled with what to do with one field event – the shot put. In TDM’s plan the shot put would be moved from the current spot near the end of the tennis courts, to inside the track. However, Glenn Howard of CDM Smith said that plan was made when the inside of the track was going to be artificial turf. With natural grass the heavy metal balls thrown by shot putters would make big indentations.

The group debated a few options, but did not come to a conclusion.

One option would be to rebuild the shot put area in the current spot, however, that would mean the tennis and basketball courts could not be moved as far and would result in fewer parking spaces. on the other side of the courts

Another option would be to find some sort of surface that could be rolled out on the grass that would protect it from the shots, and keep it in the spot in the plan on the Orchard Street side of the track closer to the tot lot.

A third option would be to create a space on the curve of the track closest to the football field where a stone dust pit could be constructed. Designers would look for a spot that would not interfere with the playing field inside the track.

The group also worried that the discus would make divots in the grass, but because it is such a large area they do not think it could be moved, and did not believe a protective cover that would be big enough could be found.

“We will have to ask the (Department of Public Works) to be extra diligent in fixing divots,” Picirrilli said.

The javelin also is thrown on the grass area, but track coaches said they do not leave big divots in the field.

The Victory Field Committee meets again on July 10 in the Lower Hearing Room in Town Hall when the group will discuss the parking area and the tennis and basketball courts. The items not decided in Tuesday’s meeting will be brought up again, too. See a schedule of the meetings here.