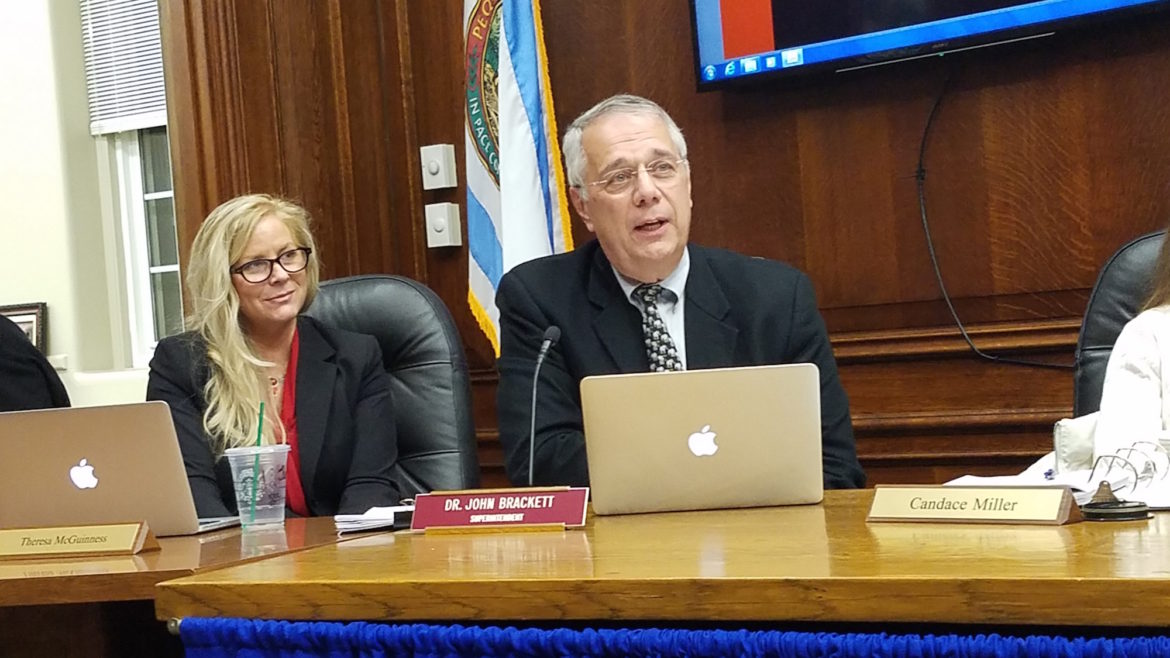 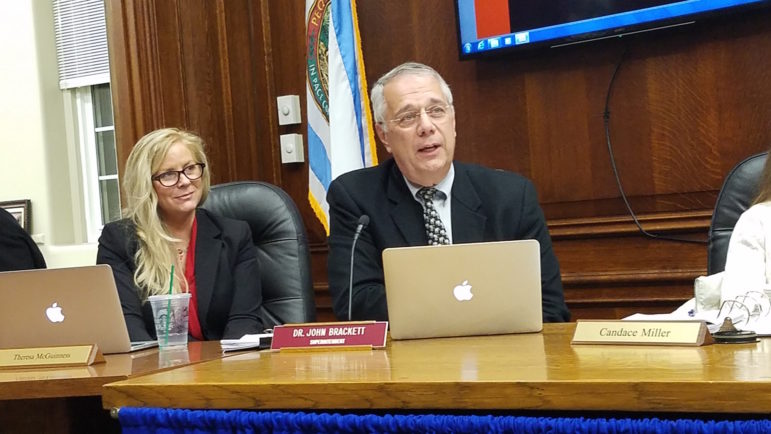 Interim Superintendent John Brackett finishes his time in Watertown at the end of June and the School Committee said he did more than they ever expected. He is show here with Assistant Superintendent Theresa McGuinness.

When John Brackett was appointed Watertown’s interim superintendent the town’s schools faces many issues – a leadership vacuum, schools needing modernizing and expanding and someone to oversee the finances.

Last week, the School Committee said goodbye to Brackett, and lauded him for not just keeping the Watertown Public Schools in the same shape he found them but leaving them in a position to take the next step forward.

Brackett was hired in late October 2016 following the sudden retirement of Superintendent Jean Fitzgerald in September and he will end his tenure on June 30, 2017. The Watertown Schools needed to hire not only a permanent superintendent but also a school business manager, prepare the district to renovate or rebuild all of its schools along with the business of running the schools each day.

All of those have been accomplished or in the case of the school renovations, have made significant progress. He also made strides in communicating with parents, the community and others through frequent letters from the superintendent and by hosting informal Superintendent’s Coffees where people could talk about anything they wanted.

“Typically, the goal of interim periods is hold steady and not go backwards, but we have clearly gone forward,” Portz said.  “That is a testament to what you brought to the school district.”

“I think the changes you have made in the district are really profound. I did not think somebody could come in and make such important changes so quickly,” Miller said. “We are a fundamentally different place this year compared to last year, and the trajectory you set the district on is a great achievement.”

Town Council President Mark Sideris said the thought that Brackett worked well with everyone, not only in the schools, but with the Town Manager and others in town as well as with parents and community members.

“We will miss you,” Sideris said.

Assistant Superintendent Theresa McGuinness said she and others in the central office enjoyed working with Brackett.

“John has served as such a great mentor to us and is a great gentleman,” McGuinness said. “In one year’s time we have learned a lot and gelled, and I so appreciate that and I look forward to working with (incoming Superintendent) Dede (Galdston) as well.”

Brackett brought in plenty of experience as a superintendent, being in his 22nd year as one. He also has served as an interim, but this was the first time that he started after the school year had begun.

“It has truly been an honor to be a part of this district,” said Brackett who thanked the School Committee, staff, students, parents, and everyone who he worked with his time in town.

“We have a talented and dedicated staff that works very hard. We have students who continually demonstrate they are talented, they’re resilient they are accepting and inclusive of others, and a community that opens its wallets to ensure out schools are doing all that is possible to prepare our children for college and careers,” Brackett said. “The future looks bright. Certainly there is more to be done.”

“I feel very optimistic about our future. I think she is the right person in the right place at the right time,” Brackett said. “I am going to watch with great pride and pleasure all of the great things that come out of Watertown Public Schools. Thank you for the opportunity.”

3 thoughts on “Here Less Than a Year, Interim Superintendent Has Had a Profound Impact”