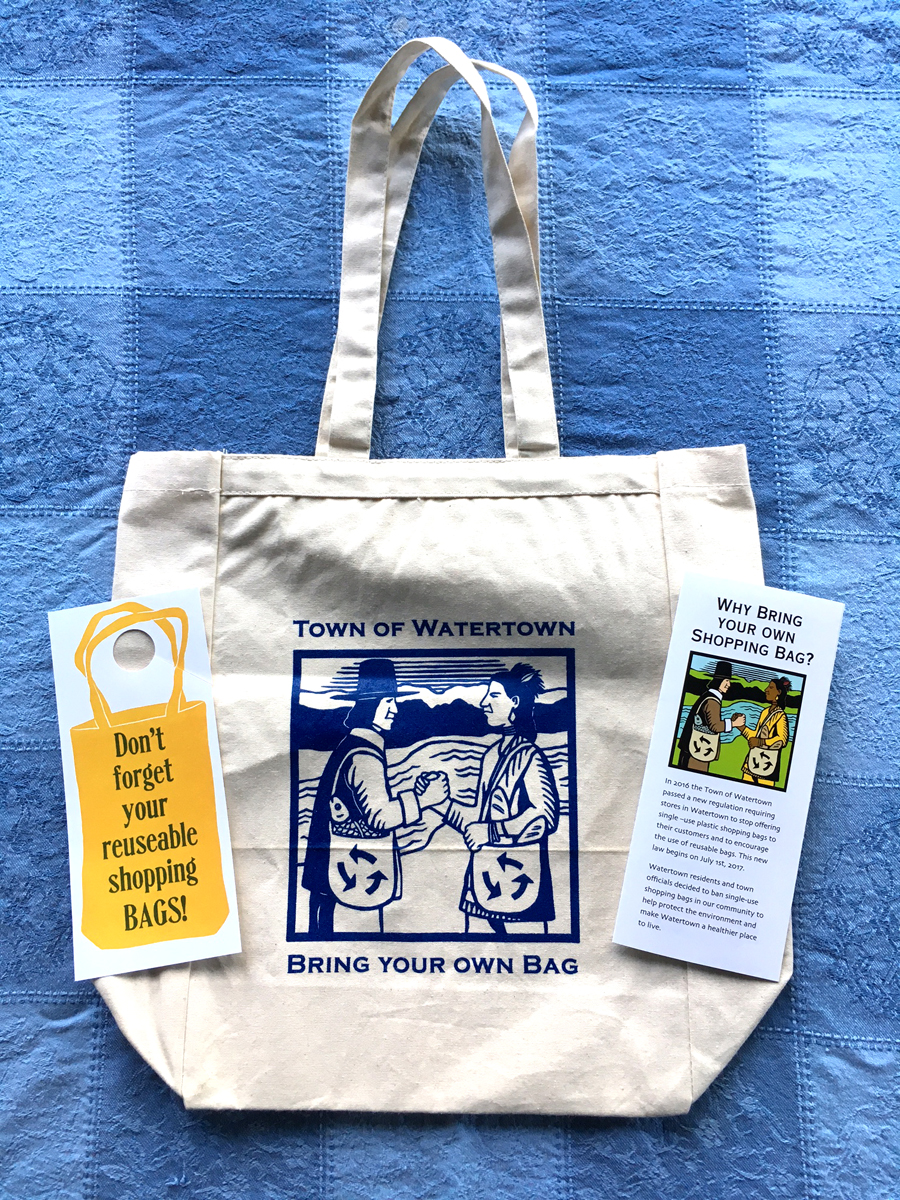 The reusable shopping bag that the ReThink Plastic group is distributing to all households in Watertown for the beginning of the new Bring Your Own Bag Ordinance. The brochure handed to businesses are also shown.

The reusable shopping bag that the ReThink Plastic group is distributing to all households in Watertown for the beginning of the new Bring Your Own Bag Ordinance. The brochure handed to businesses are also shown.

On Saturday, July 1, 2017, Watertown’s Bring Your Own Bag Ordinance will take effect, meaning that single-use plastic bags will no longer be given out by stores. The group that originally proposed the new rules will provide free bags to residents and has spread the word about the new ordinance.

“The Bring Your Own Bag Ordinance will help make Watertown a healthier place to live and will help reduce the amount of plastic waste that ends up in the Charles River and in our trees and parks,” said ReThink Plastic member Eileen Ryan.

The bags are not recyclable, and end up in trees, the Charles River and ultimately the ocean where they can harm or even kill animals.

The original proposal called for starting the ban on plastic bags six months after approval, but the Council voted to delay it for 12 months to this July.

While the ordinances bans the use of the thin plastic bags, not all bags are banned. Bulk candy, produce, dry-cleaner, and newspaper bags will not be banned, according to Ryan, who added, “Retail establishments and restaurants can provide recyclable paper bags, some biodegradable bags, and reusable bags for a fee, if they wish to do so.”

In addition, ReThink Plastic has been working to get a free reusable canvas shopping bag to every household in Watertown, Ryan said. The bag features

Watertown Bring Your Own Bag brochure by Charlie Breitrose on Scribd

“Though some opposed the ordinance, generally there was support,” Blaustein said.

If a business violates the ban the ordinance allows the Town to fine the business $100 for the first offense, $200 for the second and $300 for the third more more offense. However, there is a grace period for businesses of 6 months so they can use up the remaining stock of single-use plastic bags.

Watertown joins is one of 54 communities in Watertown that have similar ordinances, including neighboring communities of Newton and Cambridge. The State Legislature is also considering a bill that would eliminate the use of single-use plastic bags statewide.

“Watertown joins many communities in the United States and countries around the world that recognize that the overuse of plastic bags and packaging is a global problem affecting our health and environment,” Ryan said.

8 thoughts on “Bring Your Own Bag Ordinance Starts Soon, See How to Get Your Free Bag”