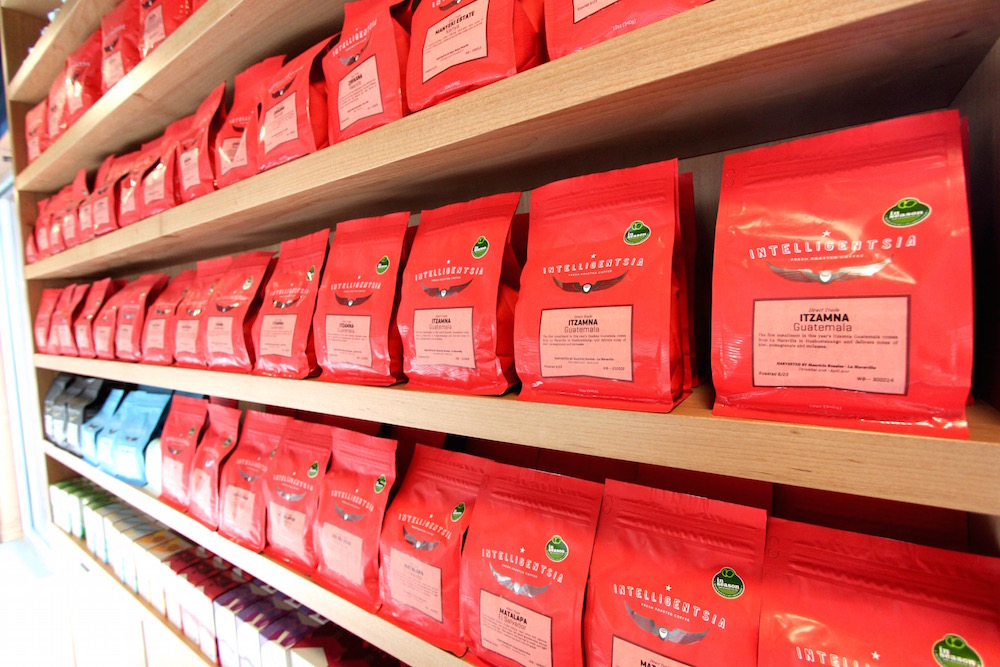 Intelligentsia Coffee works directly with growers around the world to produce the beans that will be available in their new Watertown location. 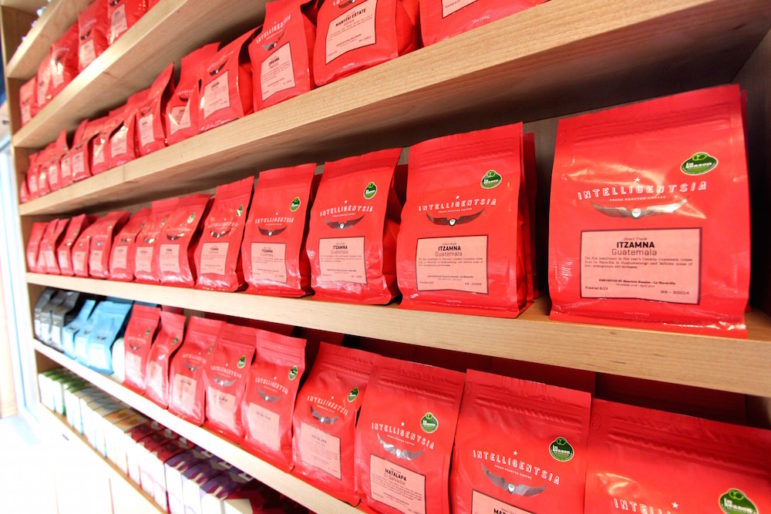 Intelligentsia Coffee works directly with growers around the world to produce the beans that will be available in their new Watertown location.

The founders of Watertown’s newest cafe started their business with the goal of selling the best cup of coffee in the world, and to do so they fanned out across the globe to find growers and helped them produce the finest beans.

Intelligentsia Coffee will be opening in the next couple weeks on Mt. Auburn Street, across from Greg’s Restaurant, but the Chicago-based held a sneak preview on Wednesday evening.

It will be the chain’s first cafe in the Boston area, which is only the fourth city after Chicago, New York and Los Angeles. The company’s roasting facilities are in Chicago, L.A. and San Francisco.

“This is our 11th shop,” McLaughlin said. “We are really excited to be here joining the Watertown community and Boston.” 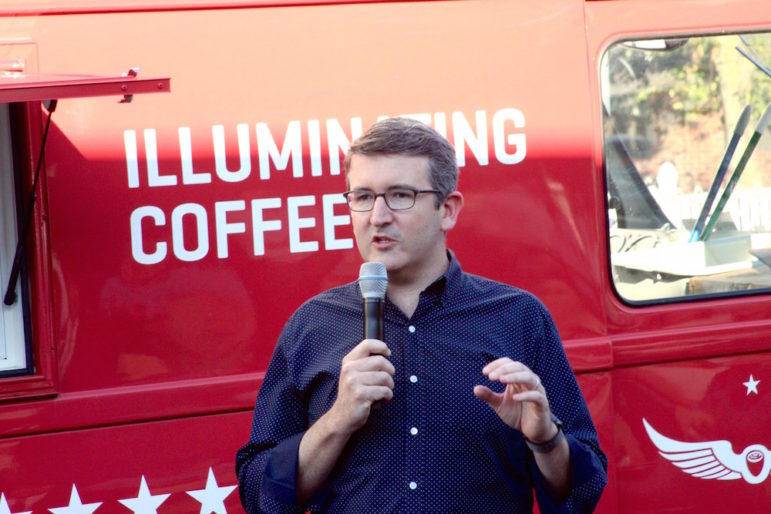 Intelligentsia Coffee President James McLaughlin said he is excited to be opening the company’s first store in the Boston area, only the fourth city across the U.S.

The cafe has taken over the former Olympic Pizza spot, 810 Mt. Auburn St., as well as part of the building next door – 818 Mt. Auburn St. – where they will have a training lab where the public can learn the basics of coffee making. The property was redesigned by Los Angeles-based architect Barbara Bestor, who is a Boston native and Harvard graduate, and is hardly recognizable as a former pizzeria.

“It is so exciting to see this transformation,” McLaughlin said. “One of our goals is to create space that is alive, where people can gather and enjoy great coffee.”

When Intelligentsia started its coffee was purchased from distributors, but the owners realized they had to create their own network and started direct trade relationships with farmers in countries where coffee is grown, said Michael Sheridan, Director of Sourcing and Sustainability.

“Twenty-two years ago Intelligentsia started out to not just serve the best coffee but the best coffee anyone had ever tasted,” Sheridan said. “Fifteen years ago we started direct trade and directly engaged with the growers.”

“We don’t go to sources looking for the best coffee, we are looking for great partners,” Sheridan said, adding that Intelligentsia looks for growers willing to be innovative and who will experiment.

Coffee from Intelligentsia is different from the big names in coffee. 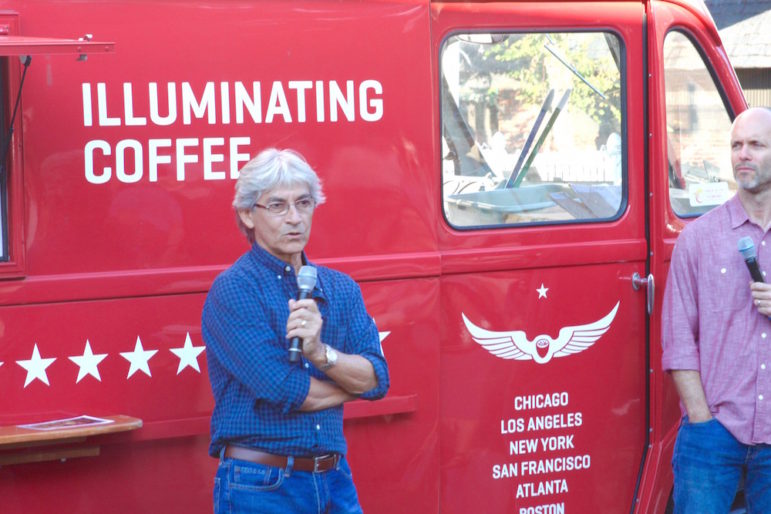 Eduardo Alvarez came from El Salvador for the opening of the Watertown location of Intelligentsia Coffee. He owns a coffee mill that process beans. Looking on is Intelligentsia’s Director of Sourcing and Sustainability, Michael Sheridan.

The coffee at Intelligentsia comes from 14 countries, Sheridan said, and each year growers from each country gather in one spot for the Extraordinary Coffee Workshops.

One of Intelligentsia’s partners came to Watertown for the event in Watertown. Eduardo Alvarez runs El Borbollon mill in Santa Ana, El Salvador, where he processes coffee, including the Malacara SL-28 grown by his cousin Epe Alvarez.

“Coffee passes through many people’s hands before you drink it,” Eduardo said.

The SL-28 bean originally comes from Kenya, but Epe now grows it in El Salvador. Customers can see exactly which grower their coffee came from by looking at the labels of the coffee beans at Intelligentsia.

When it arrives at the mill, the coffee beans are still inside the berries, Eduardo said. The key to sweet coffee, he said, is to let the berry fully ripen before processing it. Once the bean is removed, it is washed and then dried in the sun. Eduardo uses a method he learned from African producers, putting them on raised wooden tables to dry. Before being processed, the bean – which is the seed of the coffee plant – is still alive, he said.

“We dry it 100 percent in the sun,” Eduardo said. “It goes slowly to keep the embryon alive. It takes three days.”

If coffee is not your thing, Intelligentsia also serves its own line of teas, called Kilogram Tea. The teas are hand-picked and are “cultivated, sourced and prepared with the same dedication to quality that Intelligentsia applies to its coffee lineup,” according to the company announcement for the cafe’s opening.

The Watertown location will be one of the few in the chain that serve sparkling iced tea and cold brew coffee. The cafe will serve food prepared by local bakeries and other sources. 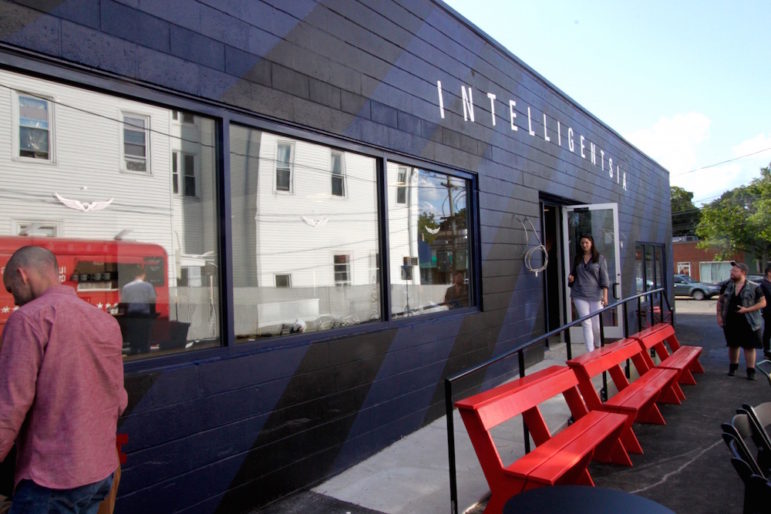 Intelligentsia Coffee will open in the former Olympic Pizza on Mt. Auburn Street.

McLaughlin said he hopes people learn not only about the how the coffee gets to their cups, but also how to best enjoy it.

Intelligentsia sweats all the details of making coffee, McLaughlin said, down to the cup it is served in – “We didn’t like the way the traditional cups felt in your hand,” he said. The company developed lighter, metallic cups with a handle, which are available at the cafe.

He added that educating customers about coffee will help them enjoy it more. For instance, like fruit, it is a seasonal product and will be freshest from different areas at different times of year.