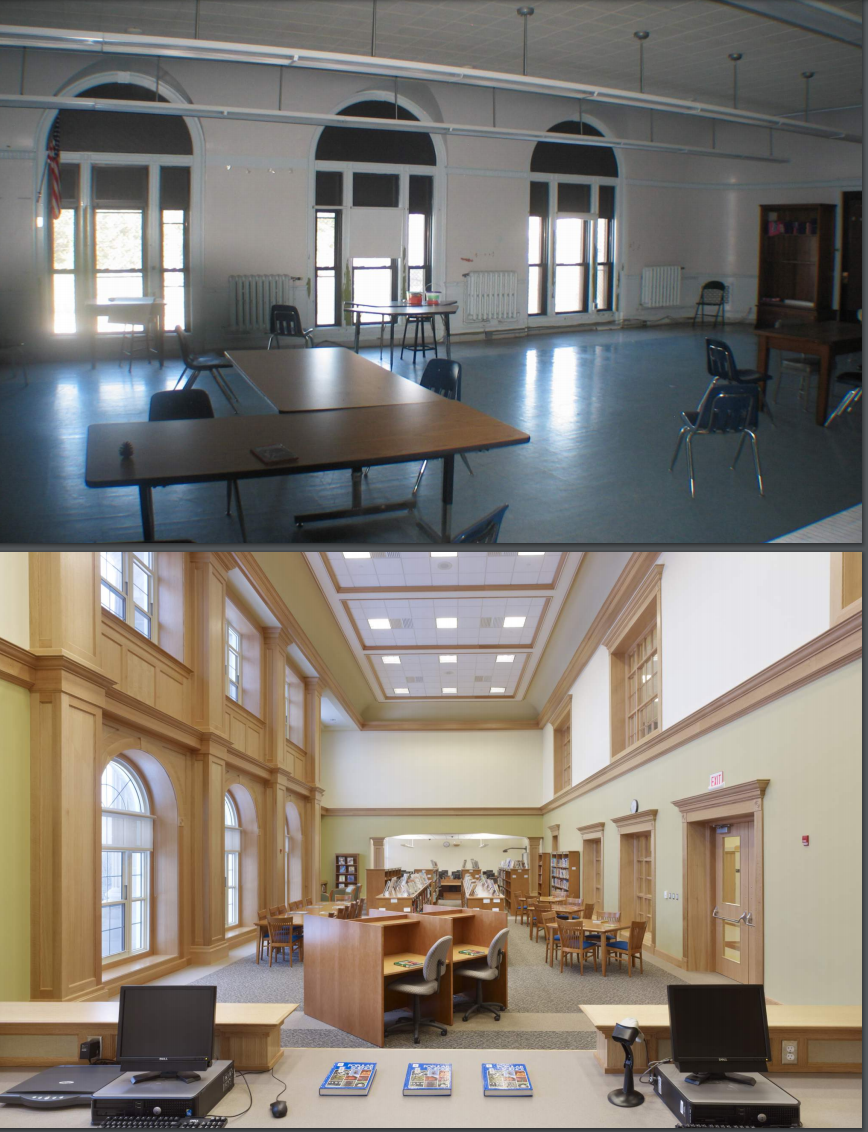 A space at Nathan Bishop Middle School in Rhode Island was transformed by pushing up the ceiling and adding more light.

Photos of Boston College High School before and after renovation with an addition. The project was designed by Ai3.

The firm hired to advise the School Committee about renovating and rebuilding the town’s schools said a renovated school would be as good as a new one, and showed before and after photos of spaces that had been transformed at other schools the firm had worked on.

On Monday night, the School Committee voted to take the first step toward renovating Watertown’s three elementary schools, tasking Superintendent Dede Galdston to work with officials on the Town side to hire an owner’s project manager and a design firm.

In July, architectural firm Ai3 presented a potential plan for upgrading the town’s elementary schools which called mostly for renovation of the current campuses with some new additions to the buildings. School Committee Chairman John Portz said since then he has received questions from the community about whether the renovated parts would be redesigned to meet modern standards or just brought up to working condition. Town Council President Mark Sideris got similar calls, wondering why the schools are not being torn down and rebuilt.

Scott Dunlap, principal of architecture firm Ai3, brought some photos showing schools before and after renovations. 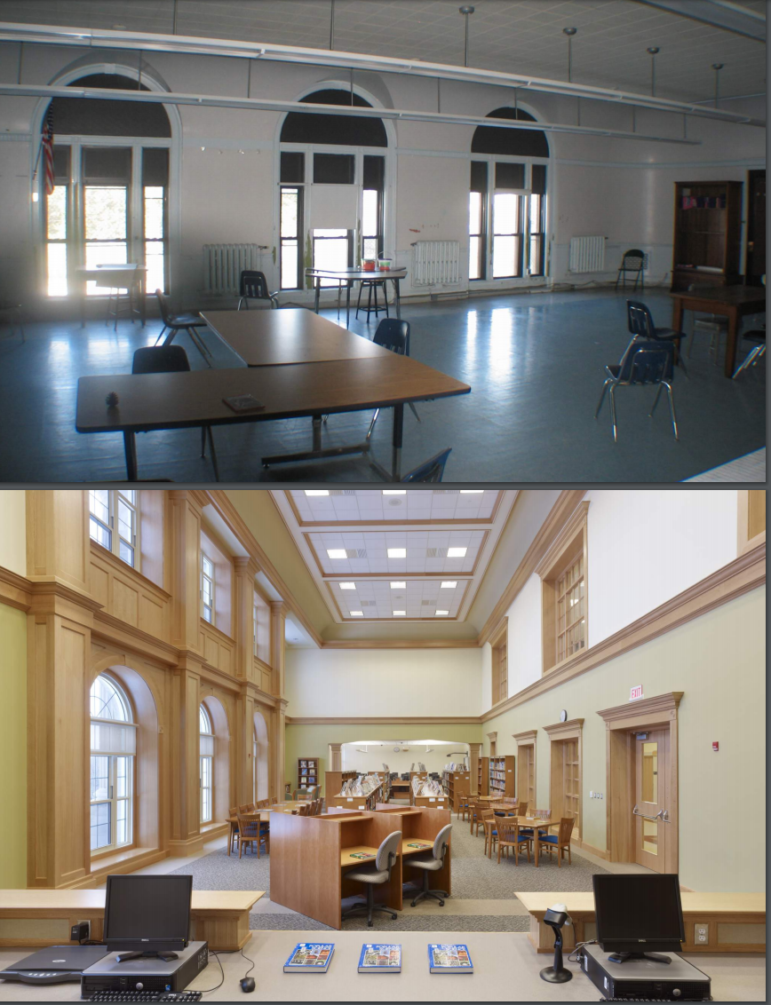 A space at Nathan Bishop Middle School in Rhode Island was transformed by pushing up the ceiling and adding more light.

The firm focuses only on schools, and had examples from Massachusetts and Rhode Island. At Boston College High School, the firm renovated the existing building and made an addition to the front that gave it a totally different appearance.

Ai3 architect Julie Rahilly said the work done at Nathan Bishop Middle School in Providence, R.I., could be similar to the proposal at Lowell Elementary School.

“It was a complete renovation of a 20th Century school where we retained the historic facade on the outside and completely renovated the inside,” Rahilly said.

Some areas were given a new look by pushing up the ceiling and brightening a dark space. One of the most dramatic transformations was a science classroom at Westerly High School in Rhode Island. The room was below grade and the only window looked onto a concrete light well. In the renovation the window, and light well, was turned into a greenhouse space.

In classrooms, more storage space was added, and in science rooms sinks were added, which appealed to School Committee member Eileen Hsu-Balzer. 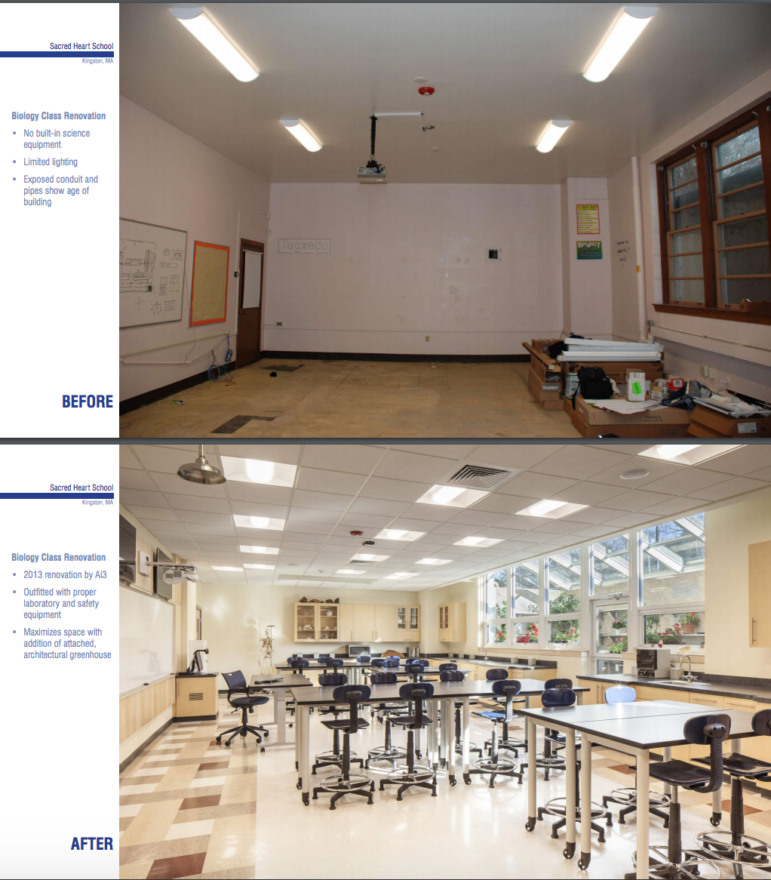 A dark, below-grade science room at Sacred Heart School got more light and a greenhouse during the renovation by Ai3.

Dunlap showed other examples of gyms, auditoriums and hallways that had been changed significantly during renovation.

Dunlap said often what makes the biggest difference for education is providing teachers with space for planning and to work with colleagues.

“With these buildings we’re constructing we are giving teachers the opportunity to operate like all other professionals: have collaboration space, planning space, team meeting space,” Dunlap said. “When we integrate these spaces into the building we are seeing a completely different attitude among teachers and a vibrance that didn’t exist before because if they are going to act as professionals it is nice to support that professional behavior.”

The plan put forward by Ai3 was just one option, and the firm may well not be the one designing Watertown’s schools. The next step in the process is to hire an owner’s project manager and then a designer, Galdston said. This must also be approved by the Town Council.

“The owner’s project manager, or OPM, will help with the selection of and will oversee contractor. They will be in the trenches overseeing our interests going forward,” Galdston said. “The designer, that’s the more exciting thing. We will hire a person to come in, evaluate the options before us – whether renovation or rebuilding – they will do a thorough evaluation.” 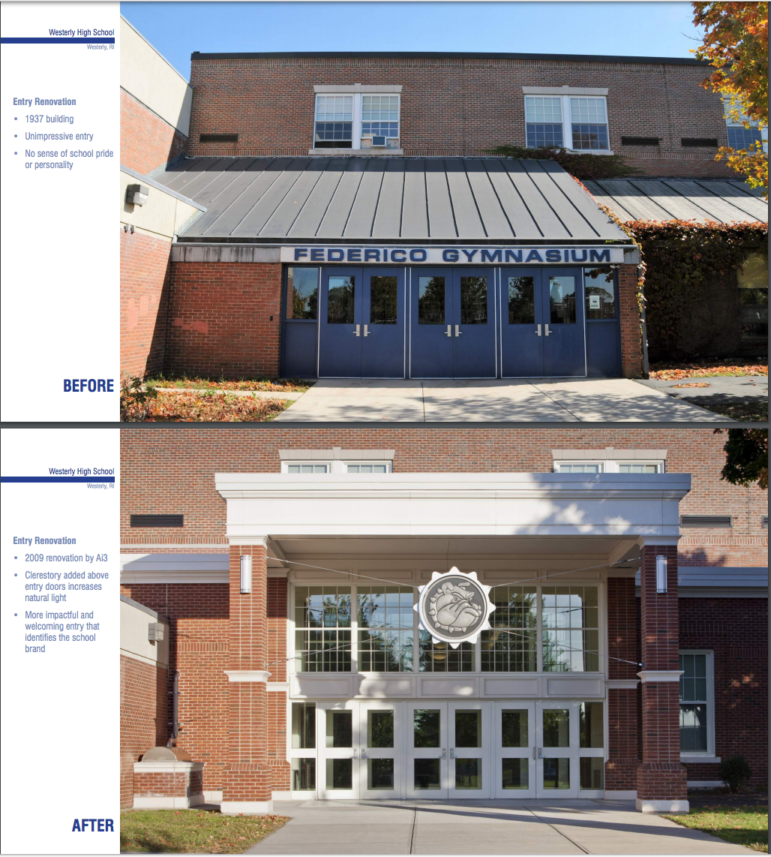 The entrance to the gym at Westerly High School in Rhode Island got a new look without spending a lot of money, said Scott Dunlap, principal of architecture firm Ai3.

The designer will then put forward some preliminary options, and the School Committee will choose which one to move ahead with, Galdston said.

“They designer will move forward with schematic design and come up with designs, and that is what we present to the community to vote on whether to move forward with construction,” Galdston said. “We will move ahead of the theoretical and go to the practical. I think that process takes a little under a year.”

The OPM will be hired first and then the designer, Galdston said. The applications for both positions will be evaluated by a group of 10 officials, Portz said, five from the School side and five from the Town side. From the schools will be: Portz, School Committee member Liz Yusem, Galdston, Assistant Superintendent for Finance and Operations Mary DeLai, and Facilities Director Stephen Romanelli. On the Town side it will be: Town Councilors Vincent Piccirilli and Michael Dattoli, Assistant Town Manger Steve Magoon, Auditor Tom Tracy and Building inspector Ken Thompson.

Hsu-Balzer said that they public will have opportunities to be involved, but would come at sometime in 2018.