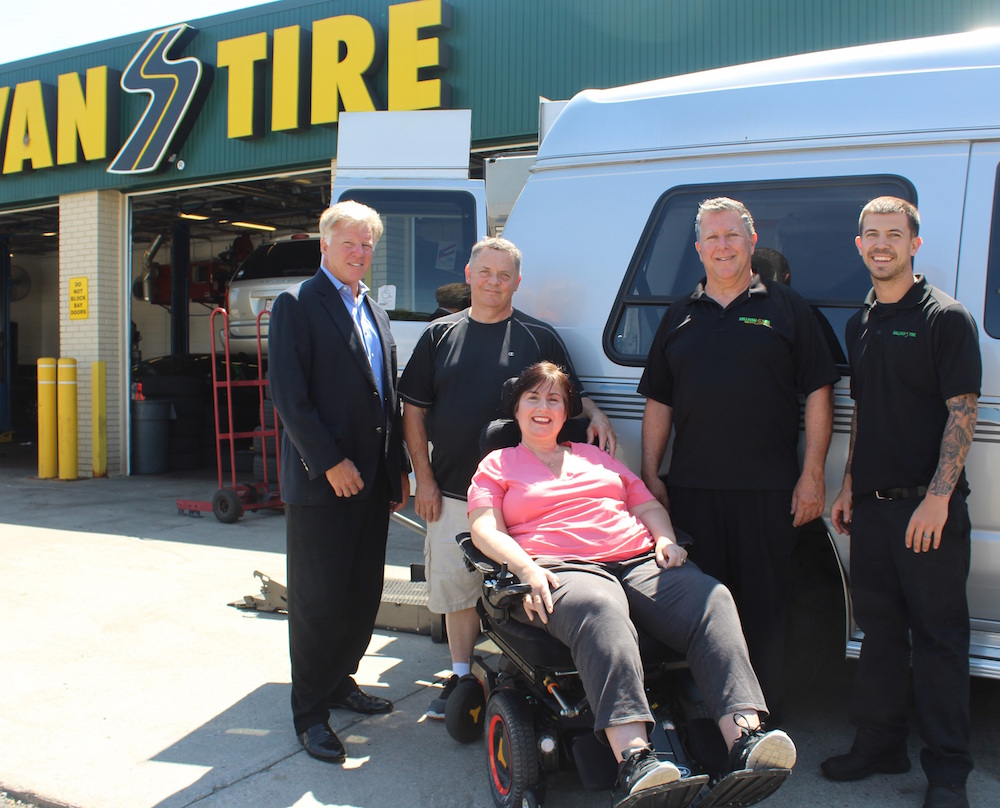 Since being diagnosed with ALS, Karen Mey has received several donations, including the van, a discount from Sullivan Tire and payment for the service by the Rotary Club. She is show here with her husband Steven, second from left, Curtis Whitney from Watertown Rotary (left) and Sullivan Tire's Assistant Manager Michael Fleishman, second from right, and Store Manger Randy Fader. 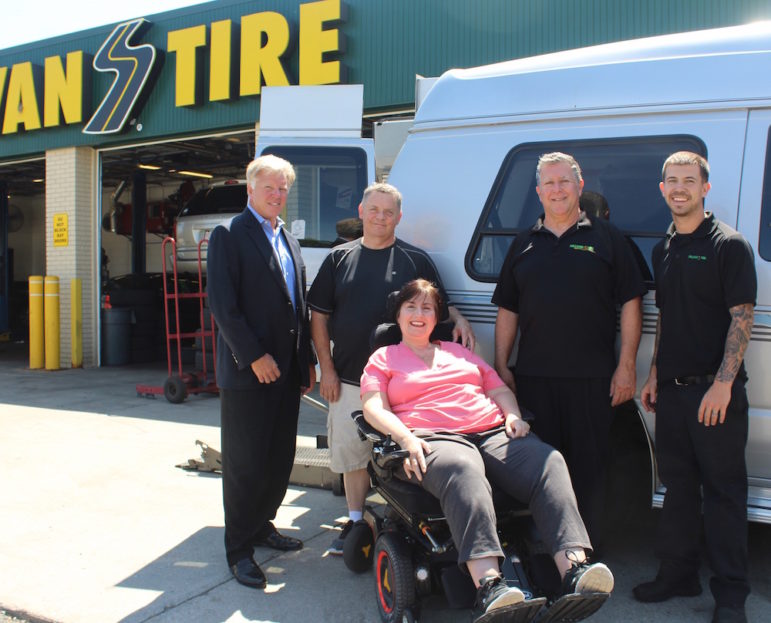 Since being diagnosed with ALS, Karen Mey has received several donations, including the van, a discount from Sullivan Tire and payment for the service by the Rotary Club. She is show here with her husband Steven, second from left, Curtis Whitney from Watertown Rotary (left) and Sullivan Tire’s Assistant Manager Michael Fleishman, second from right, and Store Manger Randy Fader.

Karen and Steven Mey have been sweethearts since high school, but they now face a life-changing challenge after Karen was diagnosed with ALS. They have been given helping hands from their community to assist the couple deal with Karen’s limited mobility.

Karen received the diagnosis of ALS – also called Lou Gehrig’s Disease – in June, but they symptoms began four or five years ago.

At first, doctors thought Karen might have carpal tunnel syndrome, which can cause pain the wrist due to repetitive movements. Then they realized it was something different and called it “motor neuron disease.”

“We went from one doctor to another. They told us to get a second opinion,” Karen said.

The ALS has progressed, and now Karen cannot move her arms or legs. She recently got hope that the progress of the disease might be slowed by a new drug. Radicava was developed in Japan and was recently approved by the FDA. It could slow progress as much as 30 percent.

Just to get the medicine, Steven said, the Meys have to come up with $10,000. This is one of many costs associated with the disease.

To help cover the costs the Meys started a page on GoFundMe.com. Besides monetary donations, they received a donation of a van.

The 11-year old van needed some work, so Steven brought it to Sullivan Tires and Auto Service in Watertown.

“They guys at Sullivan do a great job,” Steven said. “I was nervous getting an old van. I asked them to go through the whole thing. They found some things the recommended fixing, which we did.” 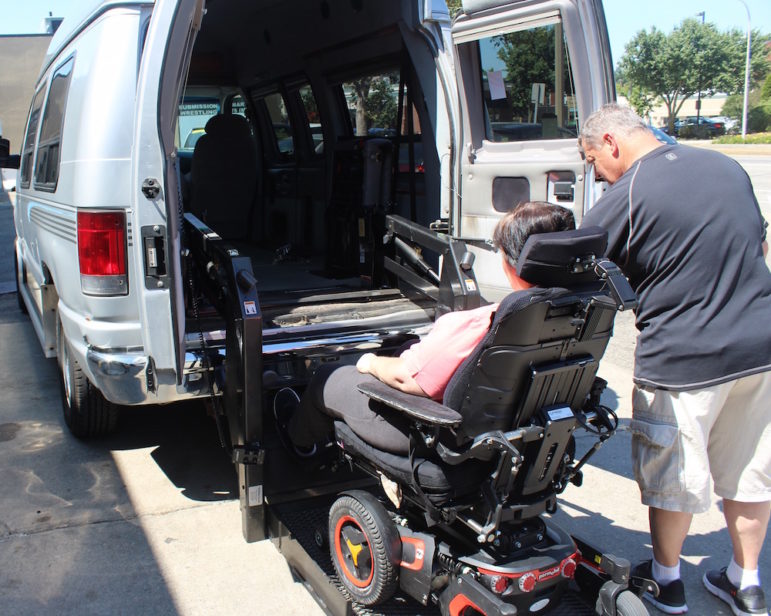 The van, donated through GoFundMe.com, has a wheelchair lift for Karen Mey, who was diagnosed with ALS in June. Her husband Steven helps her get into the van.

The van has a wheelchair lift in the back, which adds weight to the vehicle. Mechanics at Sullivan found the van had the wrong kind of tires – ones made for cars. Steven was going to pay the $900, or so, to replace them when he heard that the bill was taken care of by a donation from the Rotary Club of Watertown.

“We found out about the Meys and we decided we have got to step up and help out,” said Curtis Whitney, a Rotary Club member who knew the Meys through his insurance company, J.M. Whitney Insurance. “That’s what we do in this community, help each other out.”

Fader said Sullivan was happy to help out, too.

“It was a good team effort, along with those guys from Rotary,” Fader said. “They stepped in and helped with the cost.”

“We started the fund as a result of my uncle (Robert Whitney) who passed away two years ago from this terrible disease,” Whitney said. “This was our first donation.”

Watertown Rotary is appealing to National Rotary to make ALS a national or even international effort, Whitney said.

On Thursday, the Meys met with the guys at Sullivan Tires and with Whitney to thank them for their donations.

Karen said many people have helped them. Along with Rotary, Sullivan, those donating online the Meys have also had people cooking dinner and bringing it over on Monday nights.

While Watertown has been good to them, the Meys will soon have to leave town.

“Our house is a big colonial, and we have to get a ranch so we can get Karen around,” Steve said.

Ranches are few and far between in Watertown, and they are expensive. Karen said they are looking in and around Milford.

Donations can still be made on Karen Mey’s GoFundMe page: https://www.gofundme.com/karenmey

2 thoughts on “Couple Dealing with ALS Gets Donations from Rotary Club, Sullivan Tire”